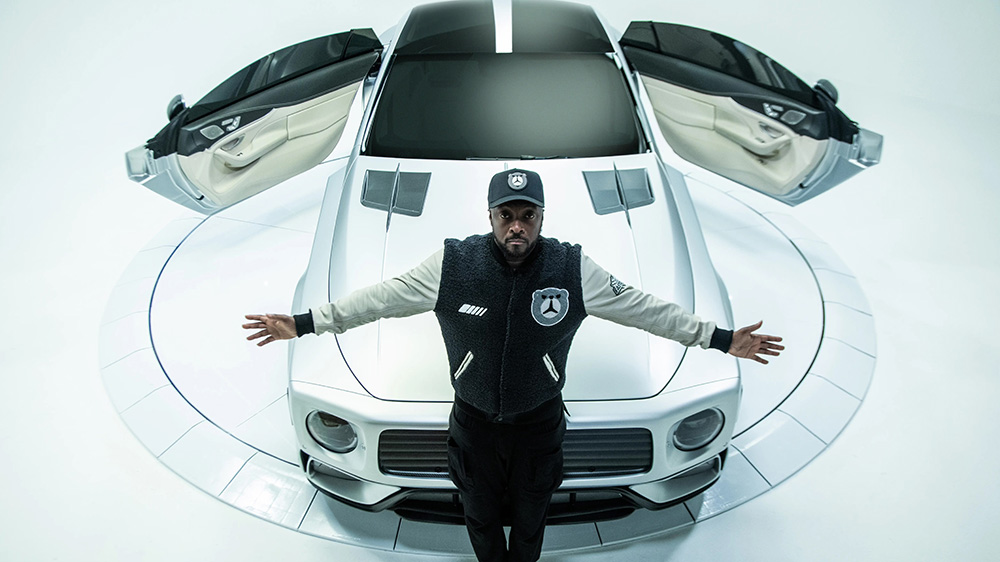 Will.i.am and Mercedes-AMG just created a striking concept car, all in the name of charity.

Fittingly christened the “WILL.I.AMG,” the futuristic four-wheeler is based on an AMG GT four-door but has been extensively modded by the folks at West Coast Customs. This is actually the sixth time the chart-topping musician, whose given name is William James Adams Jr., has enlisted the Los Angeles customizer for a bespoke ride. This time around, however, the outlandish one-off was built to bring attention to the multihyphenate’s latest philanthropic project called “The Flip.”

And bring attention it will. With the boxy front end of a G-Wagen, the Will.i.AMG sports menacing monoblock wheels and two giant suicide doors in place of the regular four doors. Elsewhere, the Mercedes badge on the grille has been replaced with a new “Bear Witness” logo, which is essentially a bear with a three-pointed star for a mouth. The founding member of the Black Eyed Peas pointed out that he didn’t touch anything under the hood, because “AMG really does make the best engines.”

The Will.i.AMG is presented along the Bear Witness clothing line.  Mercedes-AMG

Aside from looking ultra-cool, the sports car is meant to be a visual symbol for the way the duo plans to drive forward The Flip initiative to give students from disadvantaged communities access to STEAM (science, technology, engineering, arts, and math) education.

“I watched legendary hip-hop artists rap about Mercedes, so it was always a dream to own a Mercedes,” the “Where is the Love?” singer said in a statement. “For a lot of inner-city kids, owning a Mercedes is a symbol of progress and advancing out of struggle.”

The Will.i.AMG will make its world debut at the Formula 1 Grand Prix in Miami this weekend. There’s also a six-part documentary dedicated to the car called Drive that will premiere at the 2022 Cannes Film Festival. Finally, the marque has released a line of limited-edition Bear Witness apparel online and at the Mercedes-AMG Experience Center.

If all that doesn’t get your attention, we don’t know what will.