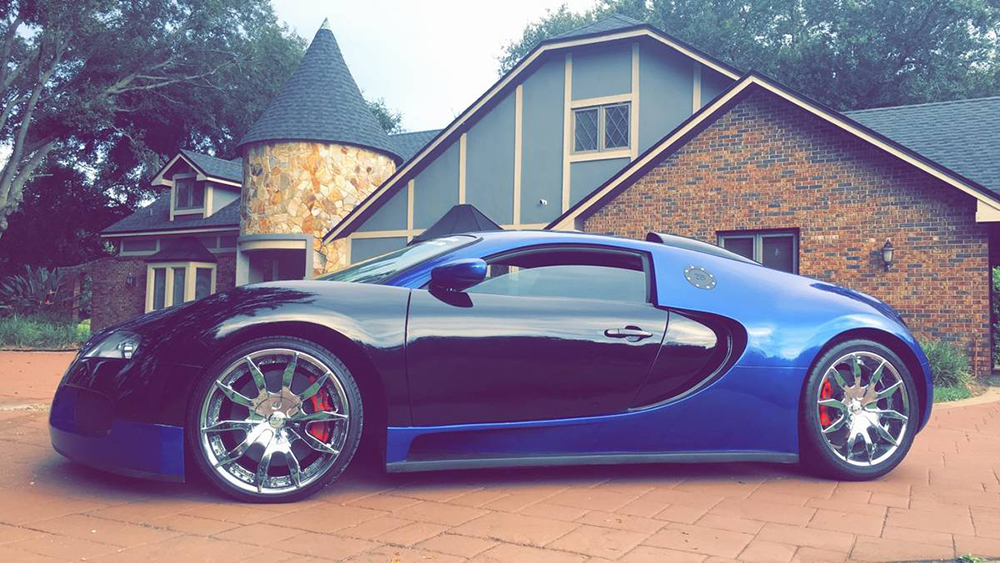 Finally, a “Florida Man” story that even Robb Report can get behind: A resourceful Florida resident has somehow transformed his 2002 Mercury Cougar into a makeshift “Bugatti Veyron,” and the effort is nothing less than impressive.

The 17-year-old converted coupe now showcases the signature sensual lines and exquisite metallic-blue paint job of bona fide Bugatti. A Craigslist ad for the car even specifies that the wing retracts “just like the real one.”

Of course, the innards of the BuCougar, as we will henceforth call it, are a different story. Though the exhaust is touted as “throaty and strong,” the Cougar’s V6 engine is only capable of delivering a measly 170 hp, a very far grunt from the Veyron’s gnarly 1,200 hp. The Bugatti-branded speedometer shows an ambitious top speed of 280 mph and while the Veyron was once the fastest street-legal ride—with a top speed of 268 mph—the Mercury’s max speed would likely sit around 140 mph.

Aside from performance, there are a few notable design differences, too: The mash-up comes complete with back seats, which an authentic Veyron does not have. Moreover, the “suede ceiling and dash” and leather upholstery is a rather hodgepodge: The colors don’t match and it’s decidedly weathered, certainly not something you would see in a legitimate seven-figure Bugatti.

The BuCougar was first listed on Craigslist 13 days ago for $125,000 and has subsequently appeared on Car Export America for $128,000, which makes it either the world’s most expensive Mercury or the world’s cheapest Bugatti.

That said, we can’t help but give this Florida Man an “A” for his audacity and imagination. Earlier this year, we saw similar ingenuity and pluck from a father and son duo who decided to 3-D print their very own Lamborghini Aventador. These ambitious undertakings may ruffle feathers of purists, but they underscore the passion for design that supercars like the Veyron elicit. Tip of the hat, sir.