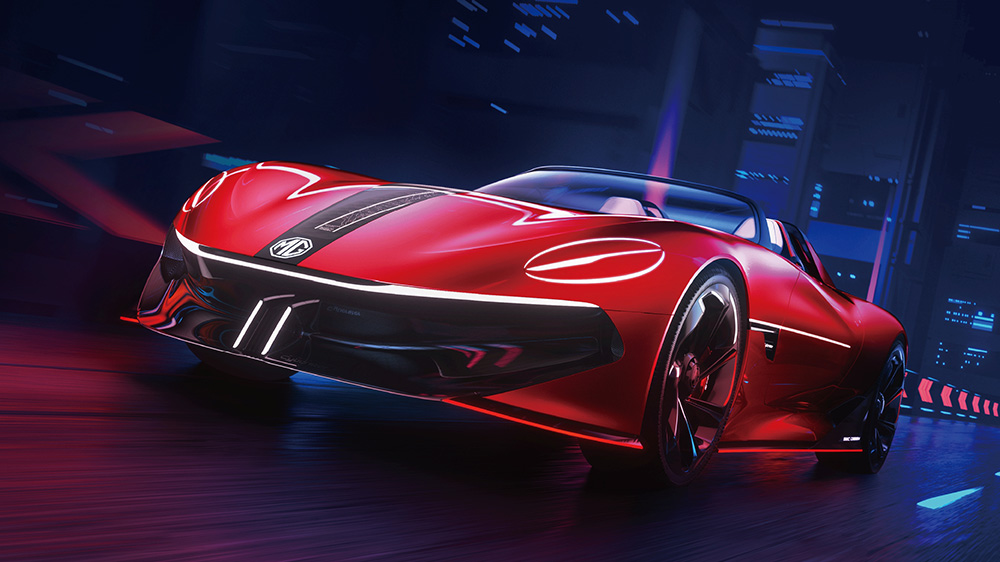 MG may not be DeLorean, but it just went back to the future.

On Thursday, the British marque shared images of its latest concept vehicle, an all-electric convertible called the Cyberster. The roadster marks a return to open-top sports cars for a brand that has spent most of its time churning out generic compacts and crossover SUVs since it was acquired by Chinese conglomerate SAIC Motor in the aughts.

The flamboyant convertible concept is expected to make its official bow at the Shanghai Motor Show later this month. Renderings of the concept show a curvaceous speed machine that looks like it was taken from a video game set decades from now. Despite this, the car features several references to the MGA and MGB roadsters the brand built between 1955 and 1980, including the its trademark round “Magic Eye” headlights, slime grille and a “Laser Belt” LED strip along the side meant to recreate the original’s chrome detailing.

But the sports car showcases entirely new design elements, too, including a bold, squared-off rear with integrated LED taillights. The driver’s cockpit, meanwhile, features a digital gauge cluster, a palm scanner for security and a jet fighter-style steering yoke. We can’t imagine the cockpit ever making it to a production car—at least not this century—but it’s certainly fun.

“The Cyberster is a bold statement that looks strongly into MG’s future, touching on our heritage but more importantly building on our cutting-edge technology and advanced design,” SAIC Design Advanced London director Carl Gotham said in a statement. “Sports cars are the lifeblood of the MG DNA, and Cyberster is a hugely exciting concept for us.”

Thursday’s reveal was meant mainly as a teaser, so we’ll have to wait until later this month to learn the Cyberster’s technological specs. What we do we do know, though, is that the roadster will ride on an electric platform with 5G connectivity and have an impressive range of 500 miles. It remains to be seen whether the convertible will ever go into production, but it’s nice to see MG wade into the future.