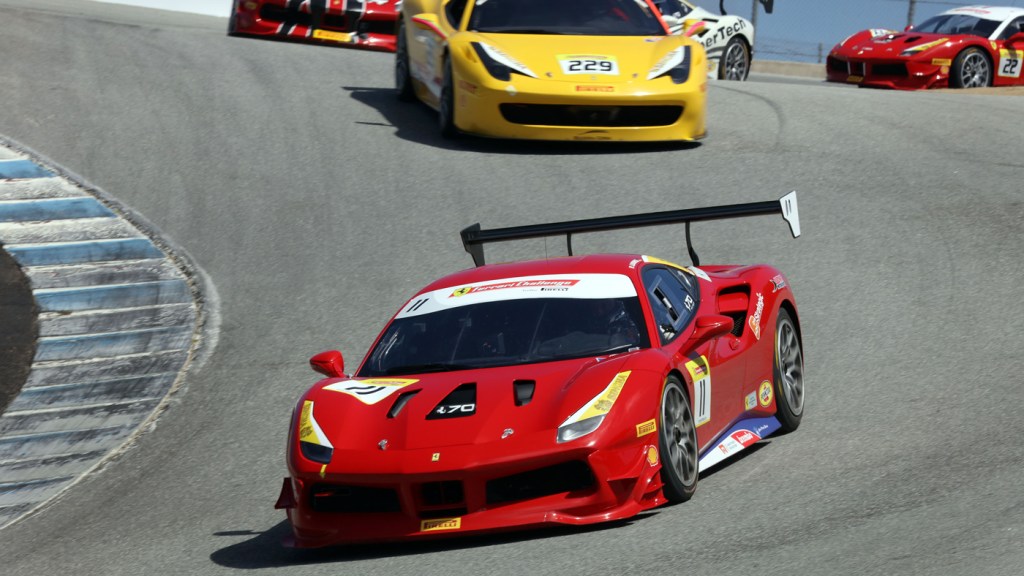 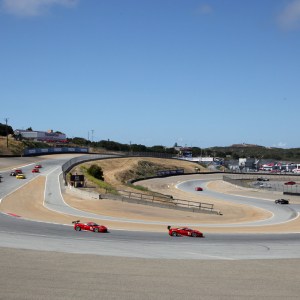 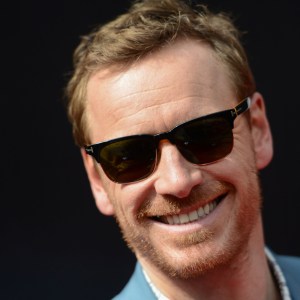 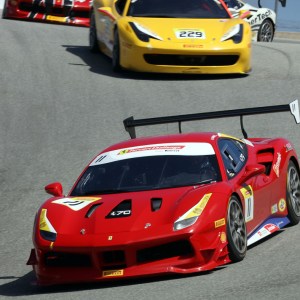 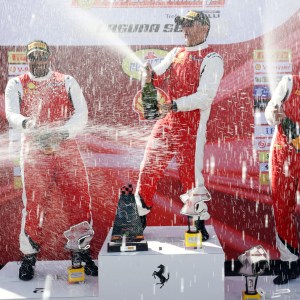 Ferrari has been synonymous with racing, from founder Enzo Ferrari’s first turns behind the wheel of an Alfa Romeo to the marque’s high-tech Formula 1 exploits today. But while its professional triumphs are legion, the house of Maranello has always taken pride in producing winning machines for gentleman racers, one of whom is now Michael Fassbender, an entrant in the latest edition of the 25-year-old Ferrari Challenge series.

The current season started on May 12 at the iconic Mazda Raceway Laguna Seca in Northern California’s Monterey Peninsula, not far from where the annual Pebble Beach Concours d’Elegance unfolds each August. A record 57 amateur drivers ripped through the 2.2-mile track’s fabled Corkscrew turn in a mix of 458 EVO Challenge and new 488 Challenge cars, the latter being the first turbocharged machine Ferrari has deployed for this mono-marque competitive series.

Michael Fassbender in the No. 133 car.

“Racing is simply part of our DNA,” says Edwin Fenech, chief executive officer of Ferrari of North America. “What’s fantastic for us is that these clients who decide to go racing are actually helping us improve the product, because a Challenge car has its roots in a production car but is subject to extreme conditions.”

And make no mistake, this is real racing. Mere seconds after the green flag dropped, two cars collided on a straightway. Fortunately, only bumpers and egos were bruised as crews cleaned up the track.

Beyond the roar of normally aspirated and turbocharged 8-cylinder powerplants, there’s also a lot of glitz and glamour that attends these Challenge races, which this year includes stops at Circuit Gilles Villeneuve in Montreal (June 9 through 11) and the Circuit of the Americas in Austin (September 15 through 17). Bringing some Hollywood star power this year is 40-year-old Fassbender (from such films as Alien: Covenant and Steve Jobs), who follows in the tradition of Steve McQueen, Paul Newman, and Patrick Dempsey in getting a thrill from wheel-to-wheel combat.

“Michael is not only a lovely human being, but he is quickly becoming a talented driver,” Fenech says of the actor. Fassbender has said that he was drawn to the Challenge series thanks to one of his own idols—Ferrari legend Michael Schumacher.

For a substantial sum (one that includes ownership of the vehicle), Ferrari gives its fans the ability to train with its top drivers in preparation for six races that culminate in a global showdown of top Challenge series racers each fall. Beyond helping amateurs amp up their skill level, the Challenge program serves as a critical link to Ferrari’s evolving origins story.

Fenech notes that Ferraristi who truly get bitten by the racing bug have a variety of options to push the envelope of their talent and interest. “There is no limit with us,” he says with a laugh.

It all begins with the Corso Pilota, Ferrari’s progressive program of two-day training sessions on the track that qualifies each participant to race. A successful Challenge driver can advance into the GT series, which includes endurance racing, as well as Ferrari’s FXX and F1 Clienti programs — the former is by invitation only and involves track days around the world in racing versions of cars such as the 599 and LaFerrari, while the latter involves ownership of a retired F1 machine.

In the paddock area at Laguna Seca, countless modern and vintage vehicles were on hand. Of note was a stunning blue F60 America Roadster, a handful of LaFerraris, and a small corral packed with enough classic machines to fill a Targa Florio grid. To sweeten the pot further, Ferrari’s VIP lounge featured truffles flown in from Italy as well as plenty of espresso to fuel the faithful.

“What you see at a Challenge weekend is really the history of our entire brand,” says Fenech. “Enzo built his road cars to fuel his passion for racing. And that passion has never died.” (ferrari.com)