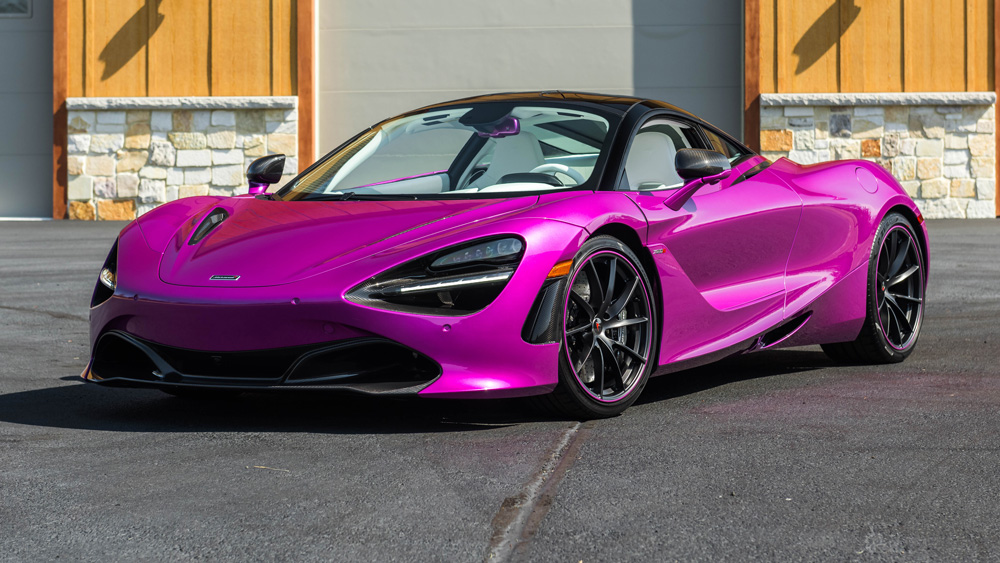 To the uninformed, it might seem as though Michael Fux is attracted to contemporary supercars for their attention-grabbing aesthetics alone. After all, anyone who buys an aggressively styled rocket ship of a car—with a paint scheme you could see from space—is doing it mostly for show, right?

For Fux, the appeal of these modern-day marvels of speed is just that: their performance. It stems from a background of racing during the 1960s, when the now-76-year-old would steer mad modified cars around short-track circuits in New Jersey or drag race a 1961 Buick Convertible, leveraging its turbo hydramatic transmission and earning date money with each, frequent victory.

The renowned collector’s extensive assemblage of cars is supercar dominant; however, that focus has materialized more within the last decade or two. “Originally, when I started buying them, only a few manufacturers were delivering high horsepower,” Fux recalls. “I got hooked with high horsepower cars and I kept buying them. Now, so many [manufacturers] are doing it, and they keep adding more and more horsepower. It became like a disease; I want every one!”

This 2015 Porsche 918 Spyder features a rare acid green paint scheme and an interior of black leather and suede.  Photo: Courtesy of Mecum Auctions.

In recent years, as Fux has continued to add to his collection, he’s recognized that he must also pare it down. “I love them and enjoy them but then they sit there,” he says, acknowledging that there aren’t enough hours in a day, or days in a year, for him to drive most of his cars with any regularity. “After a while they’re kind of abandoned, and I feel like someone else should enjoy these things.”

It was with that motivation that Fux first partnered with Mecum Auctions a couple of years ago, agreeing to sell some of his supercars, which also helped Dana Mecum position his company as a legitimate player in that category. “He made me an offer that was very difficult to refuse,” Fux says, “and he impressed me a lot. I’m a pretty loyal guy and when somebody does me right and they’re people I can trust, I stay with them.”

This January, Fux will participate in his third consecutive Mecum auction in Kissimmee, Fla., consigning almost a dozen vehicles, half of which are exotic, modern-day supercars. Choosing which cars he would sell was, as Fux acknowledges, easier than some might think. “The ones that are very, very fast, are very, very low to the ground,” he says. “As I get older, getting in and out of them is almost like being born. That’s why I sell some of them—because I can’t get in and out of them without hurting for the next three or four days.”

Among the examples crossing the block will be Fux’s 2019 McLaren Senna (the second car of only 500 examples built) and 2015 Porsche 918 Spyder, two vehicles that meet those aforementioned characteristics. Both cars also feature bespoke paint schemes and other unique aesthetic enhancements commissioned by Fux. The Senna, for example, boasts exposed carbon-fiber bodywork visible through transparent emerald green paint—a color named Fux Green, which the collector matched to a swatch of material on a pair of his sneakers.

In similar fashion, the 918 Spyder is painted a rare Acid Green and features a black leather and suede interior with carbon-fiber accents and dashes of Acid Green through upholstery stitching and the seat belts. “Doing things that other people hadn’t thought of—and then watching people still do them afterward—it’s a thrill for me,” Fux says.

Other supercars owned by Fux that are being offered include a 2018 McLaren720S (opening image) painted a one-of-a-kind “Fuxia Fuchsia,” a 2008 Ferrari F430 Spider, and a 2016 Ferrari F488 Spider donning a special-order white exterior and a bespoke Rosso Ferrari leather interior.

Looking toward the future, it’s easy to imagine additional Fux-owned supercars rolling across Mecum Auctions’ stages, in large part because the esteemed collector has no intentions of scaling back his purchases, even if he has downsized his overall collection from 160 vehicles to 110 in recent years.

“When you love something, it’s very difficult to control it,” Fux says of his passion for collecting high-powered automobiles. “You fall in love with the performance and all the beautiful things about it. I haven’t found a way to control it yet.”