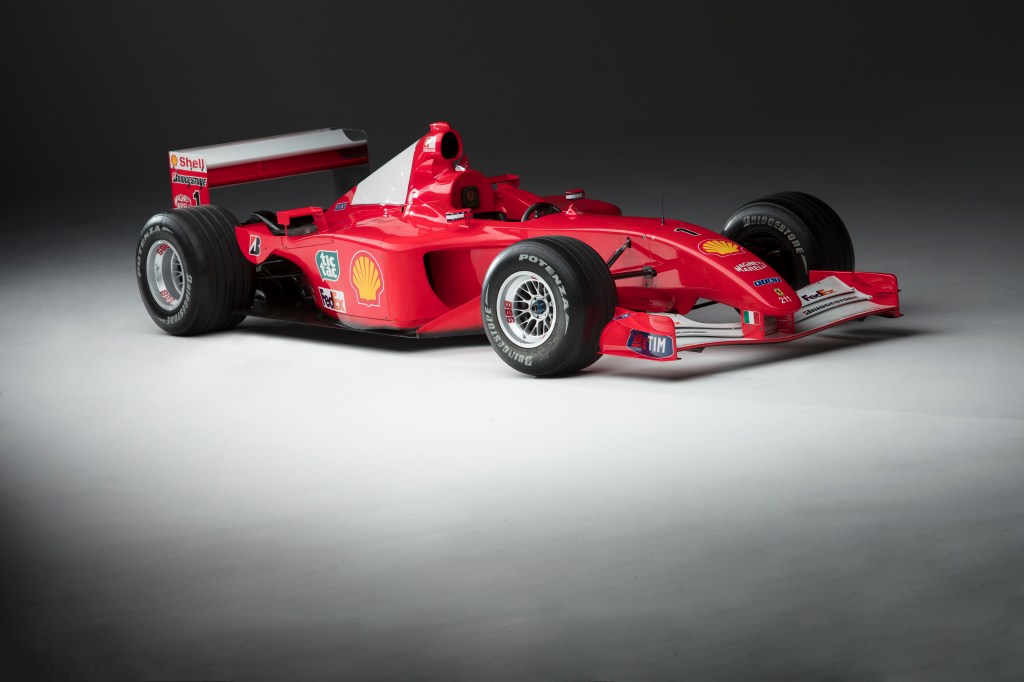 On November 16, Sotheby’s will fittingly frame the automobile as a facet of fine art when it presents Michael Schumacher’s Formula 1 Ferrari F2001 racecar as part its Contemporary Art Evening Auction in New York City. The event marks the first time a car will cross the block at a Sotheby’s art sale since the auction house joined forces with RM Sotheby’s (previously RM Auctions) in 2015.

Just as the value of a painting or sculpture factors in the talent of its creator and the provenance of the piece, so too with collector cars—and this example could be considered quintessential. The competitive Prancing Horse on offer is the steed that legendary driver Michael Schumacher raced to victory at the Grand Prix de Monaco and Hungarian Grand Prix in 2001. Those wins, two of the nine first-place finishes that Schumacher would garner in the 17-race season, contributed to his taking of the Driver’s Championship title that year. In addition, Ferrari captured the Constructor’s Championship—the marque’s eleventh such honor to that point and one of 15 to date.

Michael Schumacher and his Ferrari on the way to victory at the 2001 Grand Prix de Monaco.  Photo: Courtesy Sotheby's and LAT Images.

Along with Schumacher’s storied skills, the vehicle’s design and engineering also contributed to its success. The composite chassis carries a roughly 900 hp, 3-liter naturally aspirated V-10 engine. The rear-wheel-drive racer also features a pronounced sloping nose and elevated front wing to meet requirements that called for a decrease in downforce.

The top bidder will not only be buying a major part of motorsport history, but will also have the opportunity to take advantage of Ferrari’s exclusive Corsi Clienti track events and instruction. The marque will even store the car at its main hub in Maranello, Italy, and ship it to any of the aforementioned festivities.

Prior to the auction, the Ferrari F2001 will be available to preview during Sotheby’s Hong Kong Autumn Sales event, held at the Hong Kong Exhibition and Convention Centre from September 28 to October 3. It will then be on display as part of the Ferrari 70th Anniversary celebration at New York’s Rockefeller Center on October 8 and 9, and exhibited at the city’s Sotheby’s headquarters from November 3 until the sale. Bidding will be accepted in person, by phone, online, and in absentia.