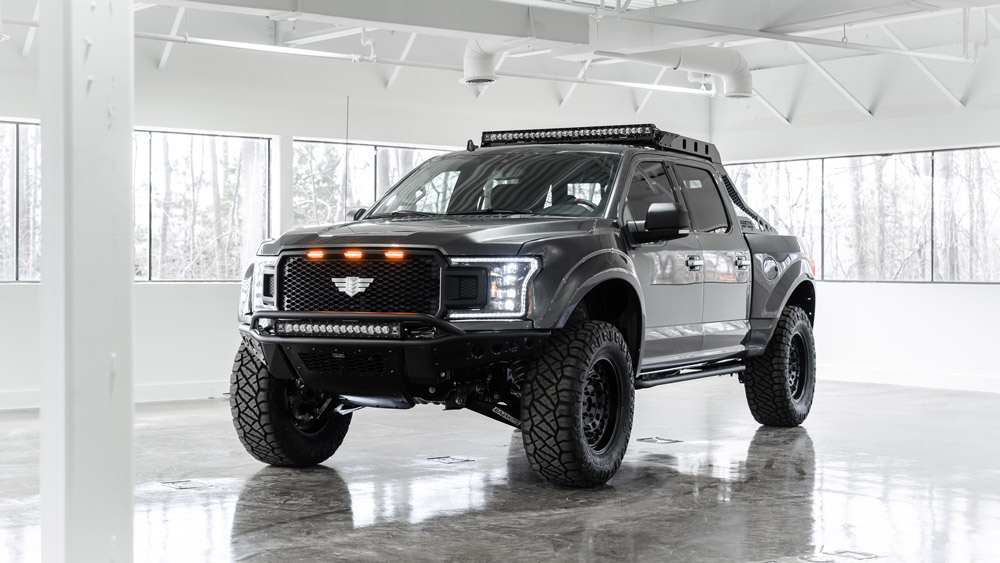 Mil-Spec Automotive, based in Birmingham, Mich., has its sights set on many of the auto industry’s aftermarket legacy brands—specifically the ones specializing in F-150 trucks. The trio of auto designers who founded the company were only toddlers when Broadway revived the musical Annie Get Your Gun in 1999, but their corporate mission statement aligns perfectly with one of the stage production’s hit songs, “Anything you can do, I can do better.” Proof of that takes the form of the 2020 Ford F-150 by Mil-Spec.

The latter is a high-performance variant of Ford’s iconic pickup, one that Mil-Spec’s CEO Adam Mitchell believes encapsulates his team’s “deep passion for upgrading some of the world’s most celebrated trucks.” The vehicle is effectively the sequel to Mil-Spec’s first, in-house designed Hummer H1, which Robb Report test drove last year.

As described in a recent press release, the company’s latest F-150 creation was designed to be a “tactically inspired alternative” to the F-150 Raptor; and a quick glance under its hood (or a firm step on its accelerator) presents a convincing argument that this specially built F-150 is exactly that.

The 2020 Ford F-150 after the Mil-Spec team finishes with it.  Photo: Courtesy of Mil-Spec Automotive.

Back in 2018, Ford’s executive vice president of product development and chief technical officer revealed that the Raptor’s engine—capable of producing 450 hp—shared almost 60 percent of its components with the Ford GT. By comparison, Mil-Spec’s naturally aspirated 5-liter V-8 churns out 500 hp. (Given its elite performance tuning, the engine is also designed to only receive 91 octane at fuel pumps.)

Mil-Spec’s version, which starts at $85,000 and rolls out of the company’s workshop fully loaded at $99,800, is available in four colors—Agate Black, Magnetic Grey, Lead Foot Grey, and Oxford White.

As an extra, the truck can be equipped with an optional Baja Performance Suspension Package. The optional setup utilizes Fox Racing components (improving the vehicle’s off-road performance to be as aggressive as a Raptor) and allows up to 11 inches of wheel travel and as much as 13.5 inches of increased track width over the standard F-150. The package also produces a truck that is seven inches longer than an F-150 Raptor, not to mention as tall as Ford’s standard F-250 heavy-duty pickup.

Powered by an engine that features improved throttle response programming, the truck is also equipped with magnesium paddle shifters mated to a transmission offering sport and manual modes. In addition, it’s compatible with off-road LED lighting systems. The goal, according to Mitchell, was to build “a go anywhere, do anything super truck.” We can’t wait for the chance to test that for ourselves.