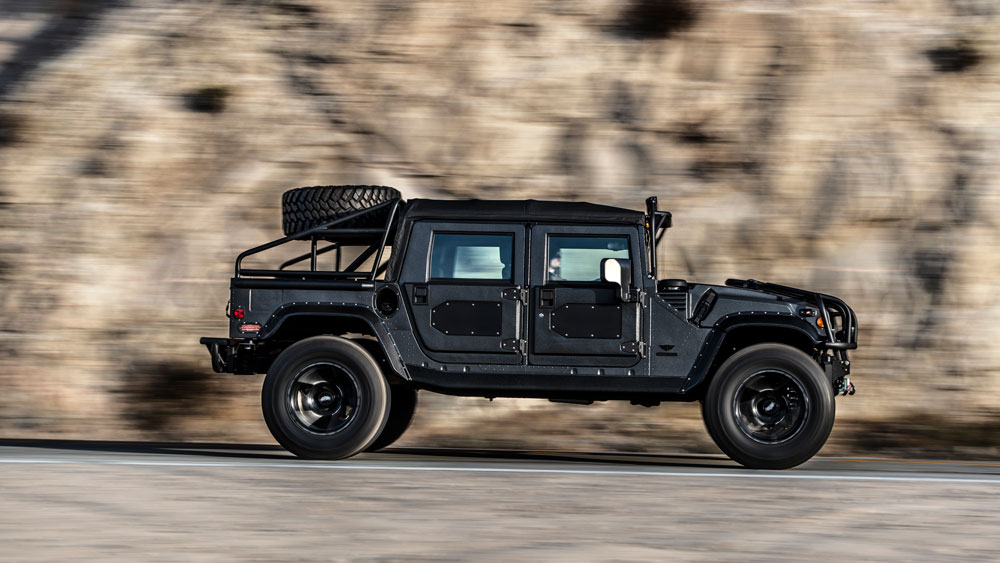 I’m rumbling through Southern California’s Angeles Crest Highway, a drive I’ve enjoyed in virtually every kind of vehicle imaginable for the better part of two decades. But this time, I own the road. The vehicle I’m piloting is wide—so girthy in fact, it hogs most of the single lane that snakes through these serene hills. It’s heavy too, to the tune of around 7,500 pounds, roughly one-and-a-half times the heft of typical full-size sport utility vehicles.

But the steed in question is anything but conventional. This is the mighty Hummer H1 as remixed by Michigan-based Mil-Spec Automotive, and its letterboxed views throw these familiar roads into an entirely different perspective. The H1 was based upon a military-built behemoth made famous by forces of nature like Arnold Schwarzenegger and Operation Desert Storm. The road-going version was available in street-legal civilian form between 1992 and 2006. While the original H1 earned notoriety for its edifice-like presence and operational quirks, Mil-Spec founder and CEO Adam Mitchell saw the bulky platform as a canvas for something quicker, slicker, and slightly plusher. Teaming up with former classmates Chris Van Scyoc and Ian Broekman, all of whom are 23 years old, the trio established the boutique company in 2015.

The vintage H1 was powered by a modest, naturally aspirated 6.2-liter V-8; the Mil-Spec model one-ups the original with a hand-built 6.6-liter Duramax turbodiesel that’s been hot-rodded from the engine block up. The new mill produces 500 hp and over 950 ft lbs of torque, mating to an Allison 1000 six-speed automatic transmission that drives all four wheels with a lockable rear axle for improved off-road traction. To quiet down the notoriously raucous cabin, Mil-Spec applies materials throughout the chassis for added thermal and acoustic insulation.

Though ruggedly capable, the original H1 package had some intrinsic compromises, among them tight engine quarters which tilted the engine cooling hardware at an angle that compromised its effectiveness. The Mil-Spec team solved the issue by repositioning and reworking the cooling system into the new power-train configuration.

Though the H1 earned a reputation for its eccentricities, the big-boned bruiser also packed a number of features unique to its military origins. For starters, its weight distribution is a near-perfect 50/50 front to rear, which enabled the delicate balance required when getting strung from a helicopter and airlifted through war zones. The ideal weight distribution also aids on-road handling. Additionally, its portal axles enable exceptional ground clearance from the four-wheel independent suspension setup. The function-minded packaging also protects critical drivetrain components by lifting them up over the passing terrain below.

When driving the Mil-Spec H1, there’s an overt sense of invincibility from behind the wheel. Acceleration from the beefed up V-8 is more than ample, especially considering the sheer bulk of the vehicle and the dramatic improvement over standard H1s. There’s also a gargantuan footprint that makes you feel like a whisper of the right pedal could crush surrounding traffic. But there are also major quirks, including a massive transmission tunnel that essentially sits between the front passengers since the drivetrain has been elevated to protect those vital components from off-road hazards. And Mil-Spec does improve the human experience within the curiously cramped cabin by trimming the interior in upgraded materials, re-padding and reupholstering the seats, and adding a considerable amount of sound deadening. “A lot of the [original] interior was an afterthought,” says Mitchell. “There were a lot of plastic parts that didn’t really do the vehicle justice.”

However, some of the added elements still feel out of place in a quarter-million-dollar vehicle. That reality is not lost on the Mil-Spec team, who readily acknowledge that despite the considerable work done to revamp the interior, there’s still room for further refinement. “There have been very favorable reactions to the overall aesthetic and the interior layout because we’ve repackaged everything; it shares nothing with the original except for the seat frames,” Broekman says. However, some of the interior bits, like the air conditioning vents sourced from an F-Series Ford truck, could be finer. Broekman suggests that “in a year or two we will be machining them out of metal.” He also concedes that these are early days, and the company is “focusing on getting the big rocks into the jar first and test the market and see how people react to it.”

While the Mil-Spec H1 doesn’t achieve Range Rover levels of luxury in its current form, the future is promising for the young, function-focused startup. With plans for an even beefier, 800 hp performance package and an available Baja-style suspension setup that offers upwards of 12 inches of travel for a smoother ride, Mil-Spec appears ready to adapt to its customer’s needs, most of which center on exploiting the Hummer’s unusual attributes. But the fledgling firm is also determined not to stray far from this rather specific niche, at least for the time being. “It’s really important for us to hone in on what we feel are our core values in terms of performance and overall package,” Mitchell explains. “Our plan is to spend even more time working on this platform to get it dialed into something that’s truly unique.”