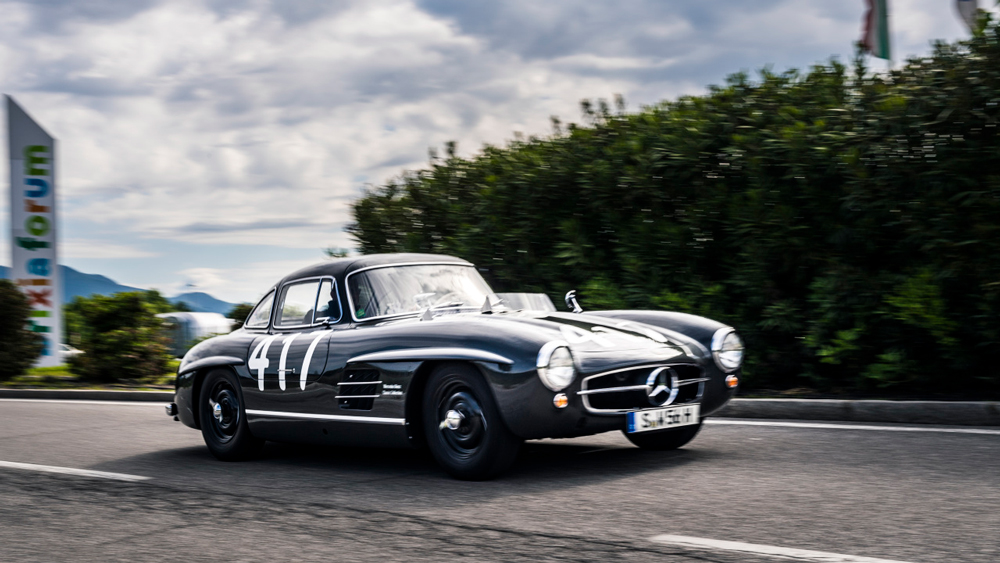 The 2019 Mille Miglia recently concluded in spectacular fashion as a priceless fleet of historic vehicles—ranging from tiny Austin-Healey 3000’s to Zagato-bodied masterpieces—rolled into the Lombardi town of Brescia, where they began only three days prior. The legendary Italian competition was first run in 1927 as a blistering race through the closed streets of Italy, the vision of two Italian counts eager to keep Brescia’s motorsports profile above that of neighboring Milan. While temporarily paused for six years, when Europe descended into World War II, the Mille was forever shut down as a street race in 1957 after a pair of tragic crashes—one killing nine spectators (including five children) when driver Alfonso de Portago’s tire exploded, catapulting his Ferrari 335 S into the crowds lining the street.

In 1977, the Mille Miglia was rebooted as a more traditional time-speed-distance (TSD) rally. But don’t be fooled, there is absolutely nothing pedestrian about the Mille: yes, the event is still held on public roads, but all models participating must have run at least once when the rally was actually a race—so many of these four-wheeler’s price tags soar well into eight digits. Absurd speeds, brutal 12-hour driving days and, at-times, ruthless competition in wonderfully visceral (and dangerously analog) vehicles still comprise the bloodline of the Mille.

We ran the 1,100-plus miles in a pristine 1955 Mercedes-Benz 300SL modeled in color and specs after American racing champion John Fitch’s no. 417 Gullwing—a machine that won its class that year (and claimed fifth overall). As the Gullwing was one of the world’s first supercars, you will find few better models to zoom across Italy in; the Merc’s 240 hp, 3.0-liter inline six-cylinder provided plenty of burst to swallow up lesser vehicles by the dozen. In current supercar parlance, that may not seem like much, but the Mercedes’ sonorous engine, smooth four-speed stick shift and able handling clearly illuminated its superiority among the field of contemporaries. If there is any point to Mercedes-Benz hosting journalists in this anachronistic adventure, it is to underscore the Tristar’s history of building world beaters decades before many of its clientele were even born.

We shot through idyllic valleys, into gorgeous villages and over ancient cobblestone piazzas in our chase across the Mediterranean country, following celebrities like Mike D from the Beastie Boys and Urban Outlaw Magnus Walker in matching 300SL’s. We passed automotive designer Marek Reichman in an Aston Martin, and two-time World Rally champion Miki Biasion eschewing his famed Martini Lancia 037 for a 1953 Ferrari 250 MM Spider Vignale.

More than 70 other manufacturers also partook in the festivities, with a duo of Italians winning the rally in a 1928 Alfa Romeo 6C 1500 SS (430 antique vehicles started the rally, but only 95 had the constitution to finish). The victory was fitting for Alfa, as the Turin manufacturer claimed the checkered flag in 11 of the first 14 Milles ever run—its unmatched success was one of the foundational pillars in establishing Alfa Romeo’s illustrious racing pedigree. If high speed chases through one of the world’s most beautiful countries sounds appealing, start working on applications for 2020—the Mille is truly a singular, bucket-list experience.