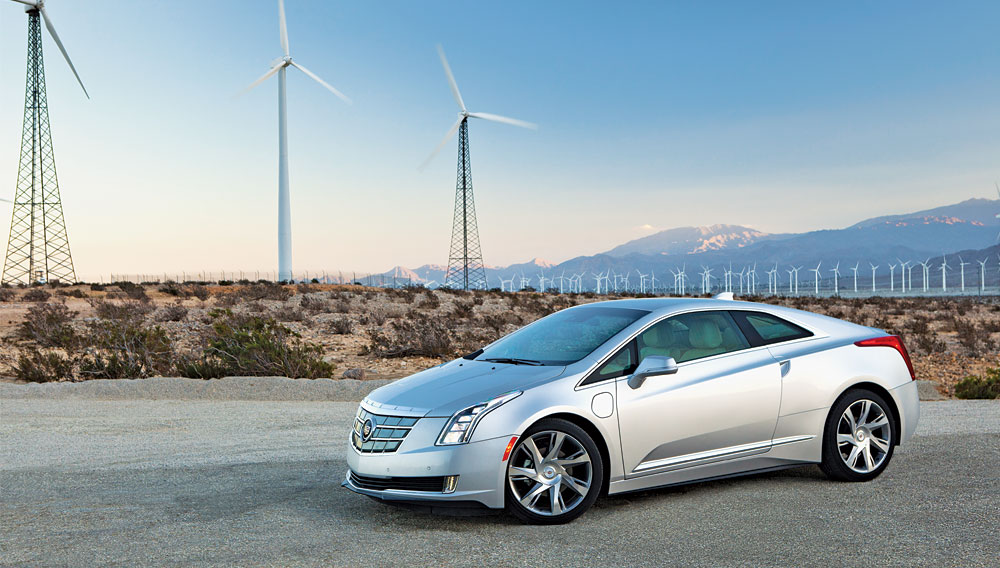 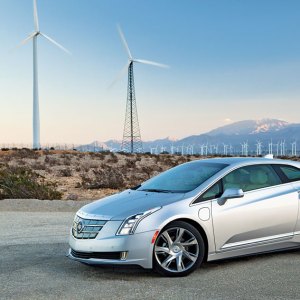 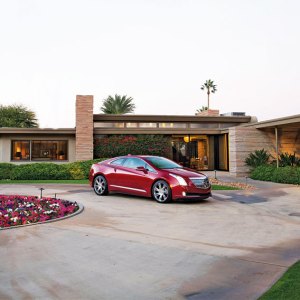 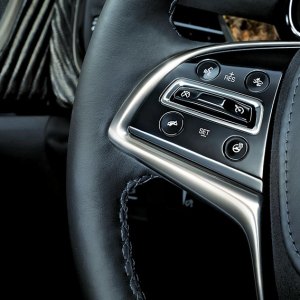 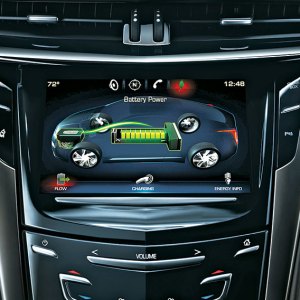 Easy access to open desert roads, proximity to Los Angeles, predictably sunny skies and warm temperatures—these factors can make Palm Springs a popular location for automakers to showcase their new performance models in the fall. Chevrolet brought its Corvette Stingray convertible there in early December; a couple weeks before, in mid-November, Cadillac was in town, hosting a group of writers as they test-drove the company’s swoopy new ELR plug-in electric coupe. But Cadillac had a reason besides convenience for staging the drives in Palm Springs.

Outside the Parker Palm Springs Hotel—which opened in 1959 as a Holiday Inn before being acquired by Gene Autry and then Merv Griffin—Thomas Kingsley viewed the ELR. One of the city’s many weekend residents from Los Angeles, Kingsley had spotted the car on Palm Canyon Drive after having seen it only online. He rolled down the window of his BMW X5 and asked if he could take a closer look. The ELR’s occupants—who included Cadillac’s director of exterior design, Bob Boniface—invited him to follow them to the hotel parking lot. There, Kingsley studied the exterior, then sat behind the wheel and declared, “I think it has panache. I think it’s a little bit avant-garde. It’s out of the norm.” Those attributes make the car a good fit for Palm Springs, where desert modernism, the midcentury-modern architecture that dominates the cityscape, once could have been described similarly but soon became the norm. To underscore the forward-thinking design of the ELR, Cadillac held the test-drives in Palm Springs and even arranged for the auto writers to tour some of the city’s more significant modern houses.

In their book Palm Springs Weekend: The Architecture and Design of a Midcentury Oasis, Alan Hess and Andrew Danish write, “Modernism’s vision proclaimed the heroic ability of modern technology to make the harsh environment livable.” That vision is reflected in the designs of Palm Springs’ midcentury houses, many of which were built for Los Angeles–area industrialists and celebrities who, in the years before and shortly after World War II, adopted the city as a getaway destination and fostered a lifestyle there of leisure and recreation.

Like the desert-modernism architecture, the ELR, which arrived in showrooms in January with a base price of about $76,000, represents the capabilities of its era’s latest technology. Though the ELR is an electric car, an owner can drive it from Los Angeles to Palm Springs and back without experiencing any range anxiety (the fear of being stranded by a depleted battery). The car is equipped with a small gas engine that powers the electric motor when the battery pack runs out. The system extends the vehicle’s single-charge range from 37 miles to more than 300.

The driving experience offered by the ELR should satisfy anyone who slides behind the wheel after a lifetime of conventional cars. The car delivers 295 ft lbs of torque instantly and features a complete array of driver-assist and safety features, a leather-lined interior, and four driving modes: Tour, Sport, Mountain, and Hold, which can save the battery power for when the car is off the open road and traveling in the city.

In describing how the ELR evolved from the Converj, a concept car from 2009, Cadillac’s Boniface pointed to the new coupe’s strategically massed volumes and sophisticated surfacing and noted the “organic, liquid reflections” that they produce. “Proportion is everything,” he said.

Proportion is also key to the desert-modernism houses, one of the first of which was designed by the Swiss native Albert Frey, who adapted Le Corbusier’s Modulor principles after coming to the desert in 1934. Other architects soon followed and offered their own interpretations of the Modulor system. The National Cash Register heiress Julia Carnell, a native of Dayton, Ohio, who wintered in Palm Springs, established the connection that resulted in the arrival of E. Stewart Williams, the scion of a large Dayton architectural firm that had built industrial plants throughout the Midwest. Williams once said, “Albert Frey brought modernism into the desert; I brought the desert into modernism.”

In 1947, Frank Sinatra, wearing a sailor hat and eating an ice-cream cone, walked into Williams’s office and said, “I want a house.” Sinatra’s lot on Via Colusa bordered the Movie Colony, a neighborhood that had grown around the Hotel Mirador, where Charles Farrell, Ralph Bellamy, and other film stars from the 1930s relaxed outside the public eye. For the Sinatra house, Williams drew upon his study of Scandinavian aesthetics and produced a bold, forward-looking design featuring exterior walls of stone and wood. The living area looks upon the swimming pool, which recalls the shape of a piano. Looming nearby are the mountains, as they always are in Palm Springs.

Desert modernism was restricted primarily to custom-built houses for an elite clientele until 1957, when the father-and-son developers George and Robert Alexander teamed with the architects Dan Palmer and William Krisel to mass-produce houses of this style. The residences they built became known as Alexanders. Eventually they would build more than 2,000 houses in Palm Springs, but initially they developed the Twin Palms Estates subdivision, which included 39 air-conditioned, 1,600-square-foot houses on large lots. The houses’ winged rooflines alternate between downward and upward strokes. Each interior opens up toward the pool, as Sinatra’s house did, inviting residents and guests to good times.

Chris Menrad—the president of the Palm Springs Modern Committee, an organization dedicated to the appreciation and preservation of desert-modern architecture—​had his 1962 Cadillac parked at the curb when visitors came to his Alexander on Apache Road. He said he first saw the house during a 1999 visit to Palm Springs and recalled how the shapes of some of the residences reminded him of Cadillac fins. “That’s what drew me into the neighborhood,” he said.

The architect Donald Wexler, who eventually designed two extravagant Palm Springs getaways for Dinah Shore in the early 1960s, sketched a more modest structure for his family’s residence in 1955. He conceived the home’s simple, rectangular shape in the attempt “to bring the outside in, to show as little of the house as possible,” said Michael Stern, a writer who leads tours of houses in Palm Springs. The glass walls seemingly allow the interior to expand and incorporate the patio and pool. The design remains impeccably fresh.

A year earlier, in 1954, Williams had turned his eye toward a minimal, organic design that emphasized livability and integration into the desert landscape, creating the Edris house. The rugged stone walls and floor-to-ceiling windows of this single-level structure appear to rise from the ground, as opposed to some of Frey’s buildings that look as though they fell from the sky. Since 2000, the Edris house has been owned by J. R. Roberts, an architect who is the vice president of the Palm Springs Modern Committee. He was quick to respond when asked about commonalities in postwar architecture and automotive design. “There’s no question automotive design was affected by architecture,” he said. “You see it in details: lines, shapes, hardware. Even the lighting in cars mimicked architectural lighting.”

And perhaps automotive design has had some influence on architecture. In addition to tail fins, the 1950s brought gullwing doors to automobiles—specifically the Mercedes-Benz 300SL—and gullwing roofs to Palm Springs. Known as butterfly roofs, they became a common motif.

In 1947, around the time Sinatra hired Williams to build his house, the famed industrial designer Raymond Loewy commissioned a villa from Frey that features an outdoor swimming pool extending into the living room. Contextualizing the Loewy home, Stern said, “It was a period of resurgence where people wanted to make a statement.”

The Coca-Cola bottle and the Shell Oil logo are among the designs credited to Loewy, who has been called the Father of Industrial Design. He also is credited with designing the Studebaker Starliner of 1953, a car with a then-novel slanted windshield. The Museum of Modern Art later called the Starliner a “work of art.” In 1972, designers from GM, Ford, and Chrysler were asked to select their favorite car. Automotive News wrote, “The 1953 Studebaker, a long-nosed coupe, with little trim and an air of motion about it, was acclaimed the top car of all time.” Eight years later, working under a 40-day deadline, Loewy huddled with a team of designers in a rented apartment in Palm Springs and created the Avanti, another Studebaker classic, which is distinguished by its lack of a grille. Loewy was determined to create a fuel-efficient vehicle, and so his mantra while working on the Avanti design was “Weight is the enemy.” He said, “In this age of fuel shortages you must eliminate weight. Who needs grilles? Grilles I always associate with sewers.”

Loewy, who died in 1986 at age 92, could not have imagined the ELR’s synchronized fascinations under the hood, though he surely would have enjoyed the results. He also would have appreciated the car’s simple but bold lines, a design statement in the spirit of his work and that of desert modernism. If he were around today to see an ELR, maybe he would even ask the driver to pull over so he could take a closer look.