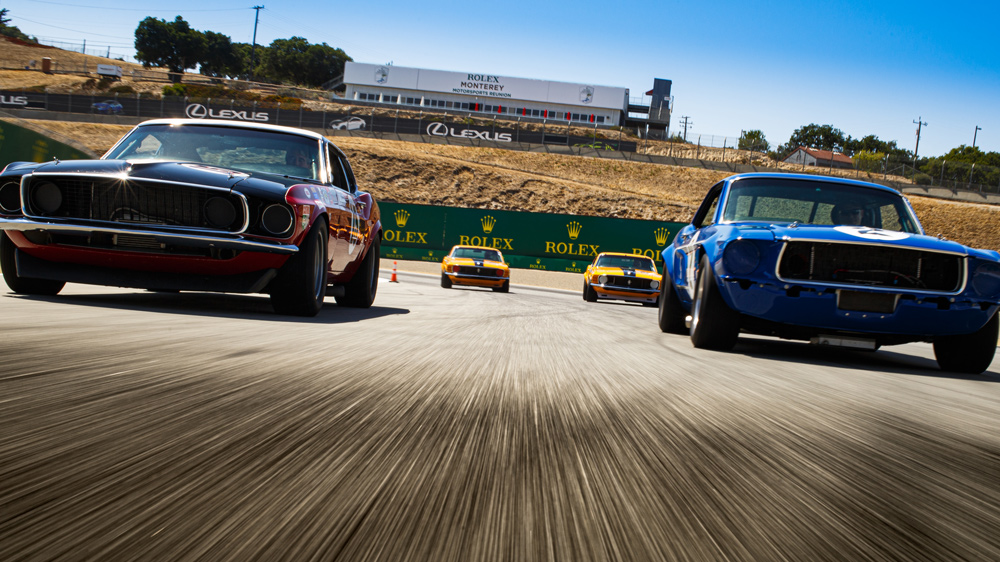 If the adage “absence makes the heart grow fonder” was ever in question, all doubt was removed over the course of about 10 days this month—for motoring enthusiasts, at least. After the automotive world’s premier expo, Monterey Car Week, in Northern California, was garaged last year, the industry’s glitterati, collectors and admirers of every age seemed determined that the 2021 edition of Monterey Car Week would not only see the light of day, but shine more brightly than ever.

The show, which now includes a series of exhibitions, historics racing, auctions and a few concours, started as a single-day car exhibition scheduled to complement the Pebble Beach Road Race in 1950. Although the latter went idle after 1956, the Pebble Beach Concours d’Elegance continued strong and, like a sun drawing celestial bodies into orbit, began gathering related automotive events.

A crowd gathers to catch a glimpse of the awards ceremony at the 2021 Pebble Beach Concours d’Elegance.  Photo by Tom O'Neal, courtesy of Rolex.

This year’s “week” ran from August 5 through 15, starting with a party the evening before the Concours Pasadera on August 6. Located on the grounds of Club Pasadera, a private golf and residential community, the show commemorated the 50th anniversary of Porsche’s victories at the 24 Hours of Le Mans and the 24 hours of Daytona in 1971—a feat the marque repeated at both contests the following year. On the four-wheel front, a 1959 Ferrari 250 TR59 took Best of Show, while a 1939 Rudge Special 500 earned top motorcycle honors.

The subsequent attractions during the preliminary days included a select display of vintage race cars and a meet-and-greet with drivers prior to their competing at WeatheTech Raceway Laguna Seca; the Concours on the Avenue, a presentation of classics and supercars along Carmel’s Ocean Avenue on August 10; and McCall’s Motorworks Revival at the Monterey Jet Center, where the viewing of exotic flying machines and automobiles paired nicely with regional wines.

A 1973 Porsche 917/30 Can-Am Spyder winds along the coast during the Pebble Beach Tour d’Elegance.  Photo by Tom O'Neal, courtesy of Rolex.

For most attendees, Monterey Car Week didn’t really get in gear until the final four days, starting with the Pebble Beach Tour d’Elegance by Rolex on Thursday, August 12. The tony rally featured approximately 150 of the same vehicles that would end up on Pebble’s concours lawn on Sunday. The 70-mile course, which begins and ends at the Lodge at Pebble Beach, includes famed 17-mile Drive and the stunning vistas along Highway 1 to Big Sur. But it’s not all about the beautiful drive: should two classic vehicles wind up in a draw at the Concours, a car which completed the course will be given the win over one that did not.

A convoy of classics on the 2021 Pebble Beach Tour d’Elegance.  Photo by Tom O'Neal, courtesy of Rolex.

The Quail, A Motorsports Gathering

One exhibition fast becoming an attendee favorite is the Quail, A Motorsports Gathering hosted by the Quail Lodge & Golf Club in Carmel Valley on the Friday before the main weekend—a most auspicious day (despite this year falling on Friday the 13th) for top-tier automakers and coachbuilders showcasing their latest masterworks. The participation of major modern automakers showcasing new machines is a major differentiator between the Quail and Pebble, with the former attracting a heavy field of prospective, qualified buyers. It’s why Automobili Lamborghini chose the venue to debut its $2.64 million Countach LPI 800-4, commemorating the 50th anniversary of the Countach. Rimac Automobili brought its 1,914 hp all-electric projectile, the Nevera, while SSC North America shared its SSC Tuatara, the same car that set a production-car speed record of 282.9 mph back on January 17.

The Lamborghini Countach LPI 800-4 (right), unveiled at the Quail, A Motorsports Gathering.  Photo by Tom O'Neal, courtesy of Rolex.

“It’s a proud moment for us to be able to have it here, open everything up and let everybody see the attention to detail,” said Jarod Shelby, founder of SSC North America. Of the Quail Motorsports Gathering, in particular, he said he was “blown away by the level of vehicles and the level of buyers that are here; it’s been really impressive.”

Rumored to have had far fewer tickets available compared to 2019, the contest and exhibition fostered even more of the casual ambiance and sense of community that it’s become known for. But while attendees were relaxed, the competition between the more than 200 collector cars was intense, culminating with a 1938 Mercedes-Benz 540K Special Roadster being crowned Best of Show.

The 1938 Mercedes-Benz 540K Special Roadster that won 2021 Best of Show at the Quail, A Motorsports Gathering.  Photo by Tom O'Neal, courtesy of Rolex.

Bookended by the Quail and Pebble contests, Concorso Italiano is where those who gravitate to the machines of il bel paese migrated to on Saturday, August 14. On the fairways of Bayonet and Black Horse Golf Course, in neighboring Seaside, over 560 examples of mobile Italian artistry vied for attention.

Director Tom McDowell describes this particular concours as “the celebration and enjoyment of all things Italian, starting with automotive excellence,” and seemed genuinely surprised by this year’s response. “I was getting bombarded with appreciation for bringing back Concorso this year. Normally I don’t get these comments from people. It felt kind of good.”

Aside from Italy’s Motor Valley mainstays like Ferrari and Maserati, marques such as Bizzarrini, Iso Grifo and De Tomaso were also well represented. But it was the town of Modena that garnered bragging rights at the finale when judges selected George and Bobbie Andreini’s 1965 Maserati Mistral Spider for the day’s ultimate honor.

Although rare and rich with provenance, many of the collector cars at Monterey Car Week are far more than museum pieces, and some proved it across four days of hard racing at the Rolex Monterey Motorsport Reunion, which ran from August 12 through 15, at WetherTech Raceway Laguna Seca. The field comprised 12 groups determined by age and classification, from 1920’s race cars to historic Formula 1 machines to endurance cars from this millennium. Testing their mettle was the 2.2-mile track’s 11 turns, including the infamous set known as the Corkscrew.

Another day at the races, all part of the 2021 Rolex Monterey Motorsports Reunion.  Photo by Stephan Cooper, courtesy of Rolex.

Special this year was a tribute to the Sports Car Club of America’s (SSCA) Trans-Am Series, specifically the 55th anniversary of Ford winning the inaugural 1966 season’s championship. Ken Adams paid tribute by besting the rest of the 1966-1985 Trans-Am pack in his 1969 Ford Mustang Boss 302 4949.

Big on the Block

Action wasn’t limited to the circuit, though, as serious collectors found heated head-to-head competition at the numerous car auctions. The cadre of auction included the power trio of RM Sotheby’s, Bonhams and Gooding & Company.

It quickly became clear that people were not only back, but ready to spend. Spread over three evenings, the RM Sotheby’s auction fetched a total of $148.5 million; that figure includes the sale of a 1962 Aston Martin DB4GT Zagato for $9.25 million and a 1962 Ferrari 268 SP by Fantuzzi for more than $7.7 million.

“We achieved a sale total that ranks in the top three best Monterey auctions of all time,” says Gord Duff, the company’s global head of auctions. “This week has demonstrated that the market is as strong today as it has ever been, with collector-grade cars finding willing new buyers from all over the globe.”

This 1928 Mercedes-Benz 26/120/180 S-Type Supercharged Sports Tourer crossed the block for over $5.39 million through Bonhams.  Photo: Courtesy of Bonhams.

Bonhams saw close to $37 million in sales, highlighted by a 1928 Mercedes-Benz 26/120/180 S-Type Supercharged Sports Tourer that sold for over $5.39 million. But the lot that grabbed the most headlines was offered through Gooding & Company: a 1995 McLaren F1 that went under the hammer for $20.46 million. That result not only marks the top price ever received for a McLaren F1 at auction, but the most expensive car sold at any auction in 2021.

And yet it was another car that captured the imagination of David Brynan, Gooding & Company senior specialist. “The F40 that we sold from the Donald Weber Collection stood out to me, as it shows the power of provenance,” says Brynan. “A one-owner, low-mileage US F40 brought a tremendous premium over two similar cars offered during the weekend,” he said. “The result is also nearly double what good US cars were bringing at Pebble Beach in 2019.” In all, Gooding ended up amassing $107.04 million from Monterey sales.

The entire raison d’être for Monterey Car Week, the Pebble Beach Concours d’Elegance held its 70th running on Sunday, August 15, as the grand finale to the multi-day motor fest. The rarified assortment of 230 show cars, considered the finest in the world, took their fairway positions at the Pebble Beach Golf Links, separated into 27 classes. Just by appearing on the lawn, each example received a boost in provenance and, therefore, value. And to complement the stunning metal on display, most attendees—and in some cases their pets—were dressed in their Sunday best and then some.

Adding to the celebratory ambiance were a few new and noteworthy collections, including 38 past Pebble Beach Best of Show winners, an exclusive category for the Porsche 917, and one honoring the 50th anniversary of the Lamborghini Countach. The latter two were won, respectively, by a 1969 Porsche 917K Coupe belonging to Chris MacAllister of Indiana, and a 1981 Lamborghini Countach LP400S Series III Bertone Berlinetta owned by Robert Bishop of Florida.

A collection of Porsche 917s at the 2021 edition of the Pebble Beach Concours d’Elegance.  Photo by Tom O'Neal, courtesy of Rolex.

Yet of all the marques, Mercedes-Benz ended up the big winner, with its 1938 Mercedes-Benz 540K Autobahn Kurier—the only example in the world—being awarded the Best of Show trophy . . . a bit of déjà vu, considering another 1938 Mercedes 540K variant earned the same title, two days prior, at the Quail.

The 1938 Mercedes-Benz 540K Autobahn Kurier was named Best of Show at the 2021 Pebble Beach Concours d’Elegance.  Photo by Tom O'Neal, courtesy of Rolex.

Although to a far lesser degree than at the Quail, there are new examples from automakers on hand at Pebble, shown on the Concept Lawn and a few surrounding pavilions. Such was the case with Aston Martin and its Valkyrie Spider, Ford’s presentation of its GT Heritage Edition, and Bugatti’s track-only Bolide. As for how Pebble still fits in the Monterey Car Week hierarchy, Bugatti’s COO of the Americas, Cedric Davey, was unequivocal, calling it “very important for us. This was the main one.”