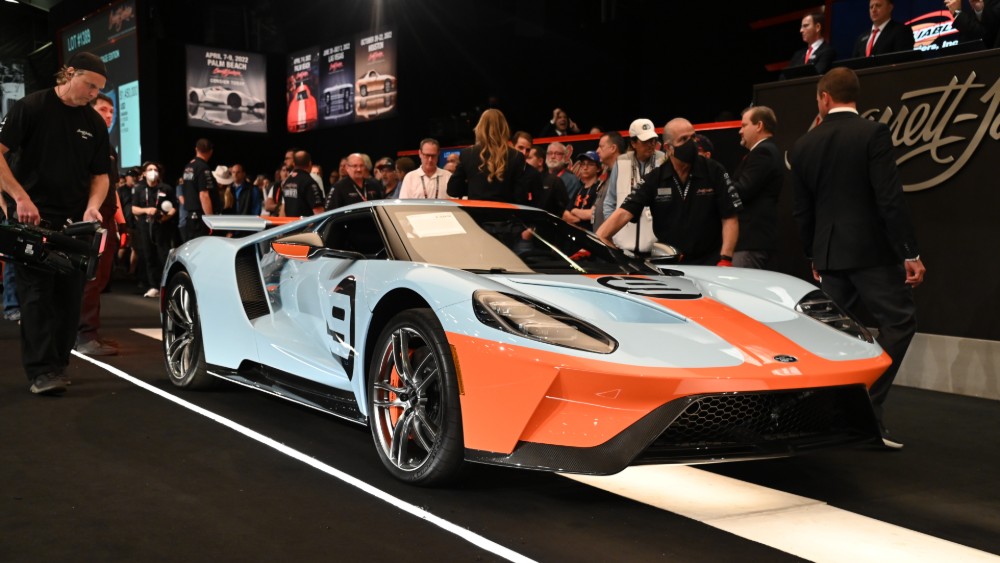 Barrett-Jackson just had a January it won’t soon forget.

The automotive auction house brought in a record $203.2 million at its recent nine-day Scottsdale sale. All told, 1,857 vehicles hammered down for over $195.9 million, while 1,153 pieces of automobilia earned an additional $7.3 million. Even better, the auction raised $8.8 million for charity with proceeds from 10 select cars going to Operation Homefront, a non-profit that seeks to provide support for military and veteran families. Among the cars earmarked for the charity auction was the first example of the new Chevrolet Corvette Z06, which sold for $3.6 million—40 times more than the new model’s sticker price.

Of course, the non-charity portion of the auction offered its share of head-turning four-wheelers, from vintage rides to contemporary sports cars. Below are the top five lots from what Barrett-Jackson is calling the most successful car collector auction in its 50-year history.

The 2004 Porsche Carrera GT is a snazzy 6-speed in GT silver metallic. Equipped with removable roof panels, the interior comes decked out in dark gray leather with racing-style seats with carbon fiber and Kevlar shells. It’s powered by a 5.7-liter quad-cam V-10 engine coupled with a 6-speed manual transmission, pumping out 650 hp and 435 ft lbs of torque.

This fire-engine red Mercedes-Benz 300SL Gullwing, one of just 855 made in 1955, once belonged to professional race car driver Santiago “Chaquito” Gonzalez, who drove it to first place at the 1957 Havana Gran Pix National Race. The gorgeous model features its original incline-6 engine with Bosch mechanical direct fuel injection and dry-sump lubrication. The exterior did receive restoration in the 1990s, including a new interior and rebuilt engine, transmission and brakes.

This 2015 Porsche 918 Spyder is one of only 918 hybrid hypercars produced by the marque. Its sleek all-white body is complemented by red leather interior. Under the hood, there’s a brawny 4.6-liter V-8 paired with a 7-speed PDK dual-clutch transmission that churns out 608 hp at 8,700 rpm. Combined with two electric motors located on the front and rear axles, the 918 can top out at 887 hp and 944 ft lbs of torque. It’s logged just 377 miles, according to Barrett-Jackson.

The 2014 McLaren P1, which sold for $1.7 million, is coated in “F1 Liquid Silver” that looks like something out of Terminator 3. Meanwhile, the 3.8-liter twin-turbo V-8 engine features 644 ft lbs of torque and a brake steering system taken from Formula 1. The PL can reach a top speed of 217 mph, and rocket from zero to 62 mph in just 2.8 seconds. Liquid silver indeed.

For those wanting a genuine track monster, the 2019 Ford GT Heritage filled the bill. The Heritage Edition model, which celebrates four consecutive victories at Le Mans by Ford, pays homage to the famous Gulf Oil blue and orange paint scheme, with a big No. 9 graphics displayed on the hood and doors. The GT comes with a 647 hp turbocharged 3.5-liter EcoBoost V6 engine and a 7-speed dual-clutch automatic transmission. This limited-edition model has less than 20 miles registered, so it’s basically brand new.