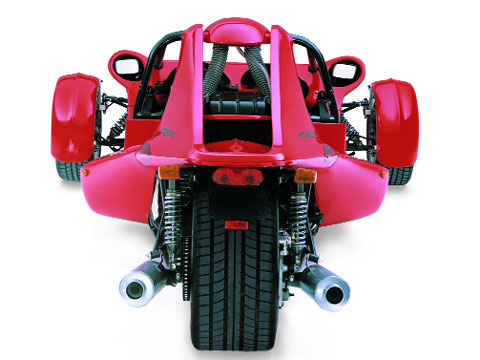 In 1989, the Campagna T-Rex made a dubious debut. A driver took the three-wheeled machine for test laps around a Canadian racetrack, and 10 minutes into the ride, he ran the vehicle off the course and destroyed it. It seemed as if the T-Rex was on a fast path toward extinction.

However, T-Rex inventor Daniel Campagna was not so easily deterred. His follow-up performed so smoothly that it became the platform for the current model, which I recently had the opportunity to drive—or ride. The T-Rex is a baffling machine: It possesses the name of a prehistoric creature, the shape of a futuristic transport module, and an amorphous quality that promotes car-or-motorcycle, drive-or-ride queries.

Even more puzzling, however, is the question of how to climb into the vehicle. “Sit on the side panel there, grab hold of the roll bar, swing your left leg in, and brace your heel against that cross member,” instructs Alain Fortier, Campagna’s factory representative. “Then pivot on your butt, swing your other leg in, and drop down into the seat.”

I follow Fortier’s instructions and take a seat beside him in the cockpit as he secures the removable steering wheel onto the column and ignites the engine. The 11-inch-wide rear tire spins, propelling the T-Rex onto the streets of Florida’s Delray Beach. Once we reach open road, we are neither driving nor riding—we are flying.

After several miles in the passenger seat, I take the wheel from Fortier.

I tighten my helmet strap, adjust the frame-mounted headrest, and punch the gas to thrust the T-Rex forward. The low-slung machine’s wide track hugs the road, enabling the race-tuned chassis to twist effortlessly into tight turns, and the rear-mounted engine powers the T-Rex out of the curves and onto the straight stretches.

The T-Rex is licensed as a motorcycle and powered by a 152-hp 1,200cc Kawasaki engine, but it handles more like a racecar than a sportbike. The machine is the brainchild of Campagna, a French-Canadian engineer who worked on Formula One Ferraris in the late 1970s as a member of Gilles Villeneuve’s pit crew. Having mined his F/1 experience to design and build a four-wheeled off-road racecar and a twin-track performance-oriented snowmobile, Campagna next set his sights on bringing similar driving excitement to a street-legal vehicle.

The 900-pound T-Rex rockets from zero to 60 mph in 4.1 seconds—slightly slower than the Moto Guzzi Le Mans and a shade faster than the Mercedes-Benz SL55—and boasts a top speed of 140 mph. It features a Carrera race suspension, mammoth four-piston disc brakes, and Z1-rated tires, similar to those on a Dodge Viper. The T-Rex can hold the road through two g’s, making the four-point safety harness a welcome addition to its deep, form-fitting bucket seats.

Paul Deutschman, the Canadian designer who has styled machines for Corvette and Porsche, sculpted the current-model T-Rex. He calls it the wildest vehicle he has ever designed. It might be the wildest ride that you can take.