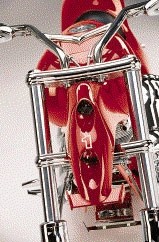 Formula One fans are used to seeing Michael Schumacher, Ferrari’s championship driver, zooming through turns and blasting down straightaways in a fluidly sculpted, bright red F/1 race car. So you might expect Schumacher, who rides motorcycles away from the racetrack, to pilot a similarly sleek Italian sportbike.

When Andre Laube, Signs 21 project manager, approached Willi Weber, a Pole Position Marketing executive, with the idea of designing and building the motorcycle, Weber consulted with Schumacher and the company’s managing director, and approved the project within two weeks. Signs 21 and Wing Wyoming, a German designer, then teamed on the design of the MS1. Schumacher added his input as well, requesting changes to the bike’s nose before agreeing to the final design. The bikes were constructed at Bike-Farm, a Melle, Germany– based custom motorcycle builder, and Pole Position Marketing introduced the MS1 in Frankfurt last September.

Its centerpiece is a highly modified 1,600cc Harley-Davidson twin-cam V-twin engine, with custom pistons, cylinders, cams, ignition, and carburetion. The engine’s original heads were altered to produce higher compression. The motor delivers 100 rear-wheel horsepower, nearly twice the output of the original powerplant. “We wanted to do this project in cooperation with Harley-Davidson Germany, but for our special bike, we needed a very extreme custom frame and much more horsepower than an original Harley-Davidson engine could offer,” says Laube. “So it was not possible to name the MS1 an official Harley product.”

The MS1 is unlike anything in the Motor Company’s lineup of cruisers, as the bike’s design is more Formula One machine than Easy Rider. The motorcycle’s Ferrari-red monocoque tank and tailpiece are made of strong, lightweight carbon fiber, like the bodywork on Schumacher’s F/1 racer. The aggressive styling of the long, low-slung, Austrian-made frame says dragster all over it, as do ultrawide 18-inch polished aluminum spoke wheels with an MS logo milled into each spoke.

The MS1 sells for approximately $84,000, including shipping for U.S. buyers, and delivery takes three months after you place an order. But if the bikes sell out, root for Schumacher to keep on winning—Pole Position Marketing and Signs 21 will build additional MS1 motorcycles for each Schumacher victory.