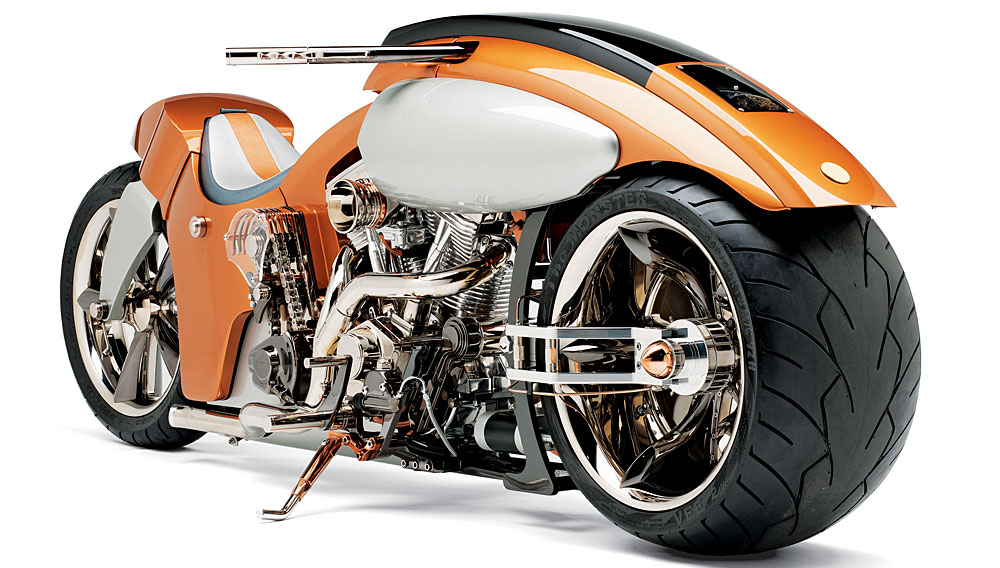 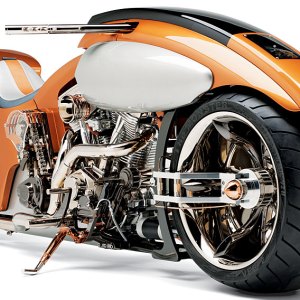 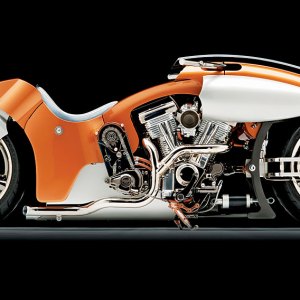 Quantum Leap is less a motorcycle than a proclamation from its creator, Eddie Meeks. His message is clear: Do not count me out, because I can still blow your mind. “When I decided to reverse everything, that was my moment,” says Meeks. “The point was to step outside the box and outside the rut that motorcycling had gotten into.”

In reversing everything, Meeks built Quantum Leap—by himself, at his EAM Studios in Greensboro, N.C.—so that the 13-inch-wide front wheel, which has a fixed position, receives the engine power, and the much thinner rear wheel handles the steering. Because the front wheel does not turn, he was able to extend the seductive bodywork, which rides atop the tubular frame housing a Patrick Racing V-Twin and all manner of gleaming handmade components, including a kickstand sculpted from copper-plated steel.

“It runs,” says Simon Solomon, Meeks’ longtime financial partner and owner of the $250,000 Quantum Leap, “but in the same way concept cars do.” That is to say, one should run it with caution. “In the four years it took to make,” adds Solomon, “it quickly crossed over from functional motorcycle to a work of art.”

“When I rode it, I guess it was a bit like snowboarding for the first time,” says the 43-year-old Meeks, who is a native of Greensboro. “You try it, and maybe you fall down. But you get back up and get used to it real fast.”

Meeks began constructing Quantum Leap in 2006, after quitting the bike-building business two years earlier, he says, because of boredom. While concurrently working on a number of architecture projects, he logged about 2,100 hours on Quantum Leap, developing a hydraulic steering system for the rear wheel and incorporating other distinctive touches such as front and rear air shocks and nickel and copper body plating—no chrome. Meeks made more than 500 of the bike’s components.

Meeks says he will build some of the other designs on his drawing board if buyers commission them, but he will not build another Quantum Leap. “I don’t like doing the same thing twice,” says Meeks. “I have some great designs yet to come, and, of course, the main thing is getting into industrial design from here on out.” Quantum Leap is intended to signal the beginning of his career as an industrial designer in the mold of Philippe Starck, who has applied his pen to everything from cutlery to superyachts. “Quantum Leap showcases my ability to create something from nothing,” he says.

Entirely self-taught, Meeks has spent nearly three decades honing his design and fabricating skills in genres that include, in addition to motorcycles and architecture, metal sculpture, jewelry, and guitars. His talent for painting guitars first earned him steady work at age 18, after he brought his instrument to a neighborhood shop to be repaired. “I’d taken the guitar apart in order to paint it, and as a result it got out of tune,” recalls Meeks. “The guy [shop owner Keith Roscoe of Roscoe Guitars] took one look and said he could fix it, but then asked, ‘Who did the paint job on this guitar?’ And that was sort of it.”

Meeks spent the next few years painting guitars that Roscoe made at the shop. During that period, Meeks learned how to build acoustic guitars, a craft he continues to practice. His guitar-painting skills soon garnered notice from Harley-Davidson owners, who hired him to paint their bikes. That business proved quite lucrative, prompting him to give up guitar painting and turn his attention entirely to motorcycles in the mid-1990s.

For the rest of that decade he thrived in the custom-bike industry, initially painting and then fully fabricating machines for the company that he and Solomon created, Hardly Civilized. A number of his creations were distinct enough to be featured on the covers of motorcycle magazines.

Meanwhile, Meeks used his spare time to develop his sculpting skills, hammering silver and copper into the shape of nude torsos. “I love the female form, so it seemed natural to concentrate on that when it came to my art,” he says.

After growing bored with the motorcycling scene around 2004, Meeks became more focused on art and later on architecture. Although he is not a licensed architect, he received his first commission in 2005, to design an estate near Greensboro. “I provided the vision for the entire compound, from where the house and equestrian center sat on the land to the way things looked inside,” says Meeks. “Those plans got handed over to an architect for the technical drawings.”

With his architecture business blossoming, Meeks thought he was finished with motorcycles for good. But when custom-cycle fabricators such as Jesse James in Southern California and the gang at Orange County Choppers in New York became TV stars, he felt compelled to deliver a message reminding people of his talents. “Suddenly feeling invisible in the bike scene bugged me, so I knew I had to fix the problem,” Meeks says with a laugh. “I wanted to build something so radical that people just couldn’t ignore it.”