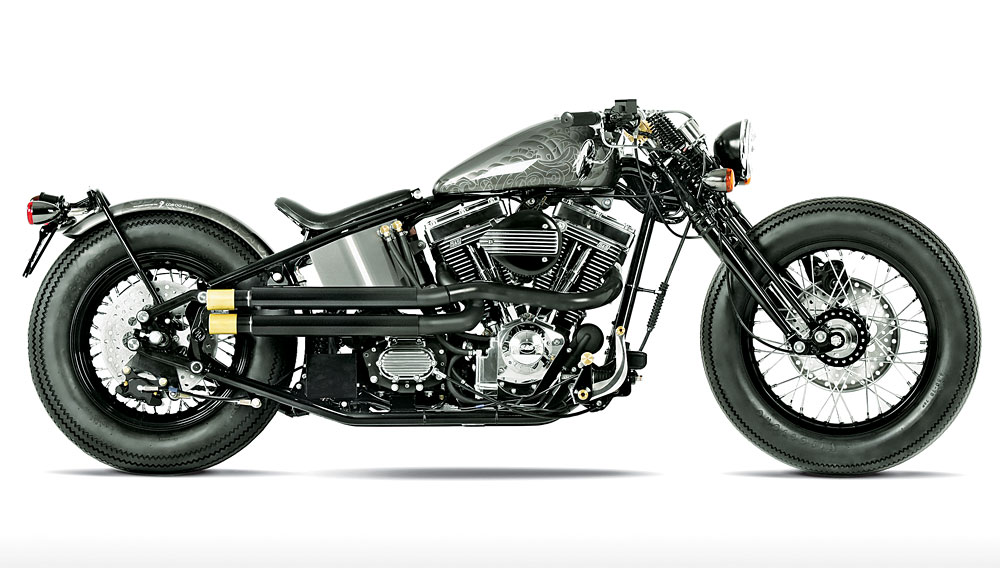 Long, low, and a little rough around the edges, the Zero Engineering Type 9 soft tail is a stirring antidote to mass-produced motorcycles. Its design combines traditional bobber and chopper elements with discreet modern components.

Zero Engineering, a boutique Japanese manufacturer and custom builder that has been operating for two decades, constructs the bike’s frames and forks in Japan and then ships them to Las Vegas, where final assembly with the domestic-built engines and transmissions takes place at the company’s U.S. headquarters. Zero Engineering offers a variety of engines, will adjust the handlebars and the exhaust configuration as requested by the buyer, and will customize the bike’s color scheme. With a custom paint job, the Type 9 starts at about $39,500 ($38,000 base price). The company, which introduced the Type 9 last fall, plans to build about 50 examples annually for the American market and two or three times that many for riders in Europe, Japan, Australia, China, and Thailand.

Resting only 25 inches above the pavement, the bike’s scooped saddle is a cinch to mount, but its sharp backward tilt proved painful on long rides. (Equipped with a 2.6-gallon fuel tank, the Type 9 has a range of more than 100 miles.) Zero Engineering is said to be working on a more comfortable alternative saddle. On the test bike, the reach to the handlebars was surprisingly short, considering the Type 9’s rakish 11.5-foot-long silhouette. The test bike was powered by a carbureted and air-cooled 96 cu in S&S Evo motor that crackled like an M-80 when ignited. The choice of V-twins ranges from that 96 cu in engine to a 113 cu in (1,852 cc) engine.

The bike includes an exposed belt drive that is directly and dangerously adjacent to the rider’s left boot (the test bike had an optional enclosed setup), and the rudimentary Springer-style front end offers no concessions to modern telescopic-fork technology. The rear end appears to be rigidly mounted, but actually a single shock is concealed in front of the wheel. During test rides, the shock dampened at least some of the roads’ roughness and enabled the 573-pound bike’s tail end to remain glued to the ground. The brakes—Harley stoppers up front and Wilwood units at the rear—required some forethought, but they tended to do as they were told.

The Type 9 offers a refreshingly real riding experience that includes a slight wobble of the old-school, bias-ply Firestones when the bike is at speed. The acceleration shoots you ahead with the slim dual exhausts roaring angrily and routing piping hot gases just past your right thigh. On the test ride, those gases were toasty enough to melt a spot on a pair of textile riding pants, proving that denim is the best fit—functionally and fashionably—for this motorcycle.