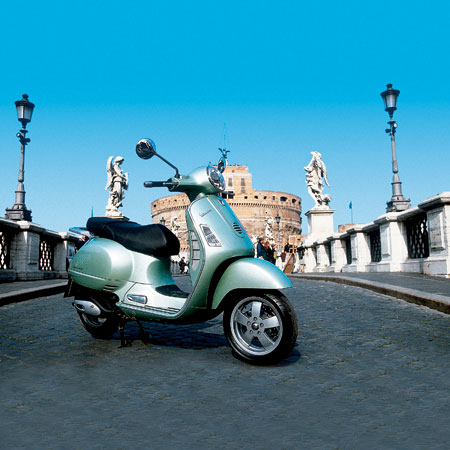 For many, the indelible image of the Vespa involves a shapely ingenue, her tresses flowing in the spring air, zipping through the roundabouts of a European capital aboard the charming two-wheeler. This perception contradicts the reality of the latest Vespa: the $4,900 Granturismo, the first new Vespa since 1996 and the largest, fastest, and most powerful model ever built by Piaggio, the parent company of the Italian manufacturer.

The Granturismo represents Piaggio’s push to convince Americans to forget Roman Holiday and consider a machine that would be more appropriate for Mission: Impossible 3. “The Granturismo is bigger, more powerful, and more American,” says Costantino Sambuy, president and CEO of Piaggio USA. “The ownership of our other scooters is about 40 percent female. We expect ownership of the Granturismo to be about 90 percent male.”

The Granturismo’s 12-inch wheels can transport a rider and passenger to a top speed of 70 mph.

The fortissimo Granturismo, which is also available in Europe, features a 200cc engine, 25 percent larger than the block that propels the 150cc ET4, currently the most powerful Vespa running Stateside. The single-cylinder powerplant, which gives the Granturismo a maximum speed of 70 mph, is Vespa’s first 4-stroke, 4-valve, liquid-cooled engine. Approximately 1,000 Granturismos will be available for sale in the United States in 2004.

Even with 20 horses galloping under its pressed steel shell, the ride of the 308-pound Granturismo can best be described as buttery. A jaunt along the cobblestone lanes of Manhattan’s SoHo proves that the Vespa’s 12-inch aluminum alloy wheels (the ET4 and the 50cc ET2, the two other American models, sport 10-inch wheels) provide a plush ride. The Granturismo, battling New York potholes that could swallow taxis whole, handles the bumps with aplomb. Three hydraulic shock absorbers, one up front and two in the rear, give the Vespa suspension capabilities similar to those of a high-end mountain bike, providing riders enough comfort to enjoy daily commutes.

Available in black, gray, and green, the Granturismo exhibits heady acceleration with a slight twist of the throttle—not enough to convince a rider to abandon his Harley-Davidson V-Rod, but plenty of power to lead your backseat passenger to dig fingers into your hips. Vespa’s newly designed dual 220mm hydraulic disc brakes make stopping sure and crisp. Even with its larger engine, the Granturismo rides two-tenths of an inch lower than its American cousins, lessening the top-heavy sensation common on many scooters when cornering.

The Granturismo, which was launched in February, will be sold through company-owned boutiques across the country. While Vespas have traditionally been ideal for casual weekend motoring or short trips down windy roads, the Granturismo’s power and comfort may convince some enthusiasts to use the scooters as their daily commuters. “These vehicles are status symbols,” says Sambuy, “not novelties or toys.”