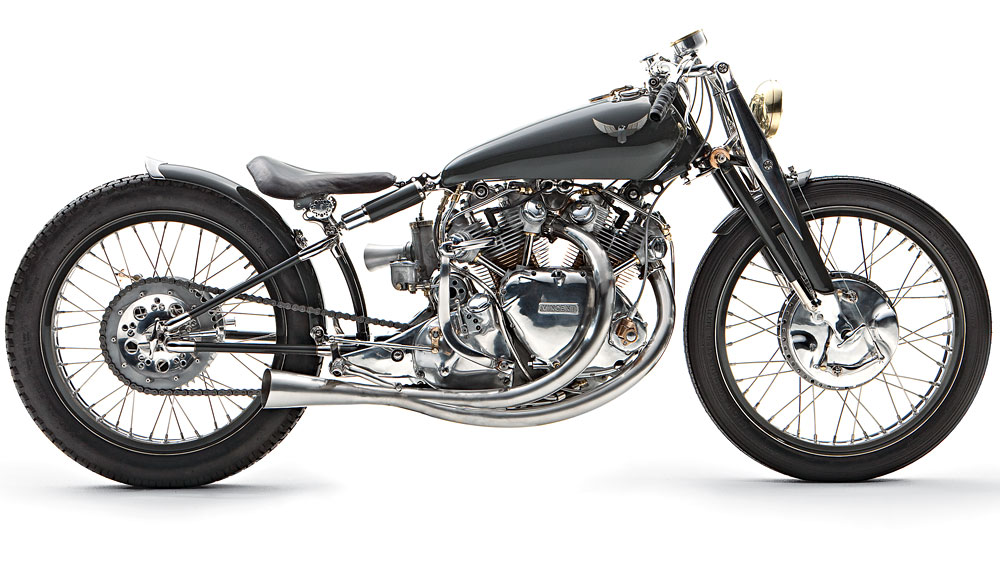 Even if he never builds another of his Concept Ten motorcycles—one-off designs created around engines from classic British bikes with racing pedigrees—Ian Barry still will possess a Hall of Fame batting average with these machines. Thus far, he and his crew at Falcon Motorcycles in Los Angeles have produced three solid hits in the Bullet from 2008 (best custom award at the 2008 Legend of the Motorcycle International Concours d’Elegance), last year’s Kestrel (best custom award at the 2010 Quail Motorcycle Gathering), and most recently, the Black, a design that began with a Vincent Black Shadow engine.

On deck is the White, which Barry and company will build around a 1967 Velocette Thruxton power plant, or the Vespertine, which will be equipped with a Brough Superior engine. What exactly each ensuing bike in the series will look like, Barry is not yet certain. “I’m always accumulating ideas for all of the bikes as I go, so it’s really a matter of what comes together first in my head,” says Barry, a 38-year-old California native who has been building and engineering bikes for nearly two decades; he formed Falcon Motorcycles with his fiancée, Amaryllis Knight, in 2007. “My bikes look like they’re from the same family, but my aim is to have them be more timeless than sequential.”

Barry and his handful of craftsmen at Falcon take about a year to build each model, making nearly every new part by hand. The Kestrel, which started with a Triumph Bonneville engine, required some 3,000 hours to complete; the Bullet, built around a Triumph Thunderbird engine, took about 1,000 hours. The White, the Vespertine, and the bikes that will follow do not yet have buyers, but each of the first three Concept Ten designs sold before Barry completed it. He declines to disclose the prices of the bikes.

The ability to afford a Concept Ten bike is just one criterion for owning one. “I’d call it a mutual-selection process,” Barry says of his relationships with clients. “I’ve had people say, ‘I don’t care what it costs; tell me when it’s done,’ and that doesn’t work for me. You should care about the bike’s creation. This isn’t about having some eye candy in your garage. It’s about appreciating both the R & D that goes into the machines as well as the joy of riding them.”

Among Falcon’s forthcoming bikes after the White or the Vespertine are models that will pay homage to, and be powered by, vintage engines from Ariel (the Altai), Norton (the Merlin), and BSA (the Grey). Once this run of 10 is complete, Barry might embark on similar tributes to bikes from Italy or France.

“In a sense this project is my childhood meeting my childhood fantasies,” Barry says of the Concept Ten collection. “All the art and math and science I took as a kid is combining with my passion for building things better than they were.”