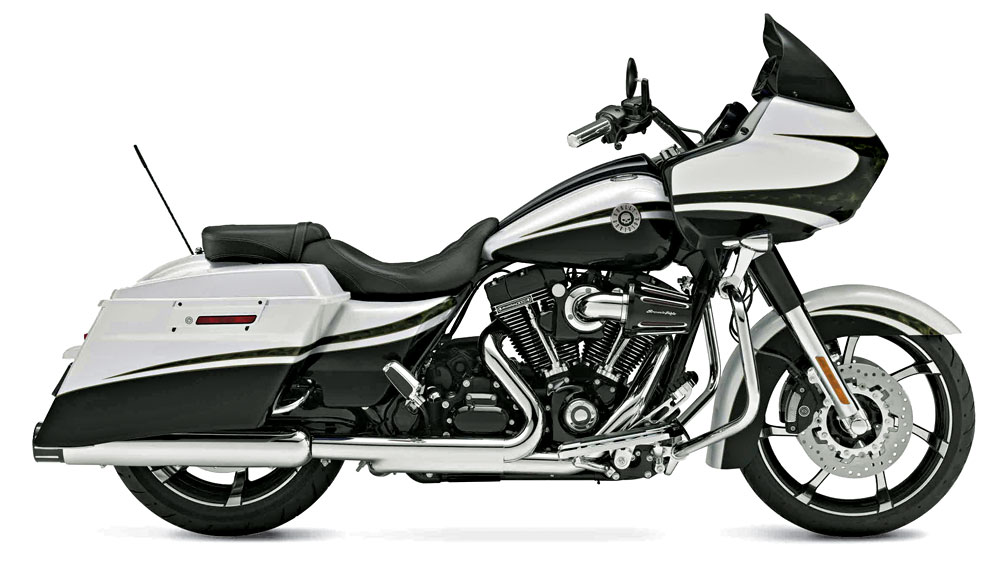 An unadorned hog seems to scream for a few trinkets, and many Harley-Davidson customers respond by spending thousands of extra dollars to add meaner engine components, louder pipes, and chrome accessories to their new bikes.

For owners who want their machines to stand out from the rest but are not inclined to à la carte accessorizing, there is Harley-Davidson’s Custom Vehicles Operations (CVO) division. Each year since 1999, the division has chosen a handful of bikes from the company’s lineup and modified them with a selection of gussied-up parts, distinctive paint schemes, and pumped-up power trains. For the 2012 model year, Harley-Davidson is bringing back three CVO models from last year—the Street Glide, Softail Convertible, and Ultra Classic Electra Glide—and debuting another: the Road Glide Custom.

About a decade ago, says CVO team manager Bob LeRoy, the standard Road Glide Custom—a swoopy touring bike with a massive fairing shaped like a shark’s nose—was “almost given up for dead” because of slow sales. But then custom builders latched on to the bike, lavishing it with ape-hanger handlebars, oversize wheels, and other ornaments and initiating a sales comeback that eventually prompted Harley-Davidson to add the Road Glide Custom to the latest CVO portfolio.

Priced at about $30,700, the CVO Road Glide Custom is powered by a 110 cu in air-cooled mill that produces a rumbling 112 ft lbs of torque at 3,750 rpm. Harley-Davidson offers a choice of three rich paint schemes: candy cobalt and twilight blue, maple metallic and vivid black, and white gold pearl and starfire black. According to LeRoy, the last—a black-and-white color combination—required special care in its design to prevent the CVO Road Glide Custom from resembling a “cop bike.” A subtle shading effect in the paint job creates what Harley-Davidson calls “real smoke graphics.”

The CVO Road Glide Custom’s amusing decorative details include small nickel-brushed skull medallions on the fairing and fuel tank—a design signature of Willie G. Davidson, the company’s chief stylist and the grandson of one of its cofounders.

The bike handles better than it ought to, given its lengthy 63.5-inch wheelbase and hefty weight of 845 pounds. Credit the frame-mounted fairing and recently reworked chassis for the smooth ride. Standard equipment includes cruise control, antilock brakes, and a six-speaker, 100-watt-per-channel Harman Kardon stereo system.

Harley-Davidson will produce only about 2,100 examples of the CVO Road Glide Custom for the 2012 model year, and it is likely that many of them will be further modified; CVO buyers spend more than all other Harley-Davidson customers personalizing their already distinctive bikes.