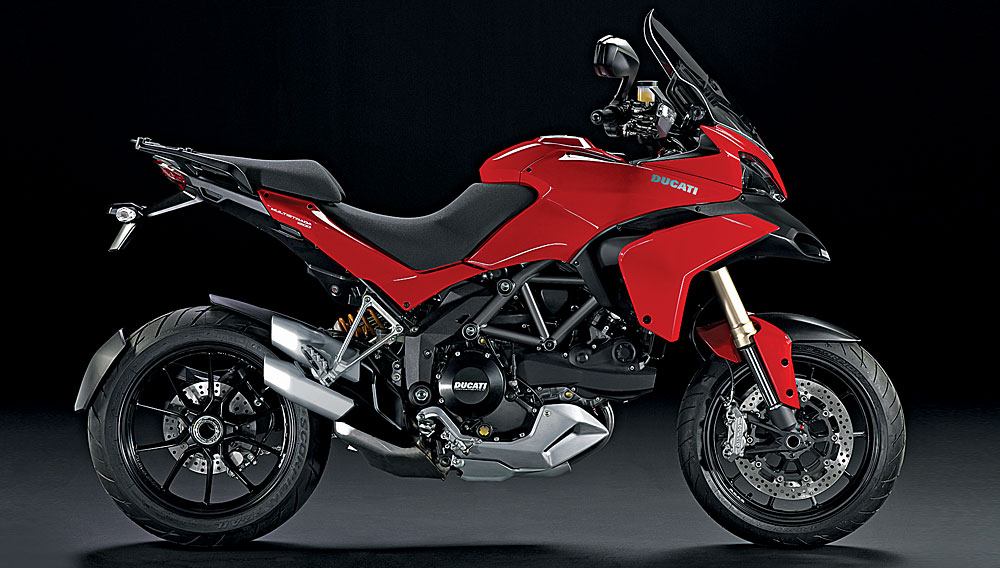 As its name suggests, the Ducati Multistrada was conceived to do much more than simply travel down the highway. Even the bike’s appearance—with its tall riding position, jacked-up front-fender overhang, and rear-wheel splash guard—telegraphed its dual-purpose ambitions. Yet despite these serious aspirations, looks and format were about all that the original Multistrada could offer in support of its all-terrain mission.

With the new Multistrada 1200 S ($19,995), however, Ducati at last brings its own brand of on-road/off-road performance to the motorcycle market. Bearing no resemblance to its air-cooled antecedent, the 1200 S features an engine-control menu that configures power delivery in four modes—Sport, Touring, Urban, and Enduro—enabling the rider to adapt the bike’s handling for any surface.

The Sport and Touring profiles permit the machine to produce its 150 hp maximum, while Urban and Enduro trim the power to 100 hp. Each of the four modes also varies the degree to which the eight-level Ducati Traction Control (DTC) system intervenes. In Urban mode, for example, level six reduces the danger of spinning out; in Enduro mode, the DTC system assumes that the bike is on gravel roads and sets the level to two, which allows more slip.

The top-of-the-line Multistrada 1200 S also incorporates electronically variable Öhlins suspension components that adjust compression and rebound-damping values to suit whichever operating mode the rider selects. In fact, along with the four basic operating profiles, the bike presents a choice of settings for four different weight distributions: solo rider, rider with luggage, rider with passenger, and rider with passenger and luggage. Because the new Multistrada is powered by the liquid-cooled Testastretta 11°, which is based on the engine in Ducati’s muscular Superbikes, the 1200 S possesses plenty of power for any of these combinations.

By retuning the Testastretta 11°’s valve timing to an 11-degree valve overlap (the overlap in the Superbikes’ engine is 41 degrees), engineers have optimized the big 1199 cc L-twin’s torque characteristics. Ducati has also added a new valve-seat material to lengthen service intervals and reduce the high maintenance costs of its famous Desmodromic valve-train system.

The result of these refinements is an amazingly versatile motorcycle that can attack a winding road with the agility and response of a sportbike, undertake a long trip with a passenger aboard, and hack up a fire road like a dual-sport machine. Ducati offers a non-S version of the 1200 that lacks the electronic suspension and traction control systems, but we wonder why anyone would forgo the versatility and verve of the Multistrada 1200 S. After all, with the S model you are essentially getting four bikes for the price of one.