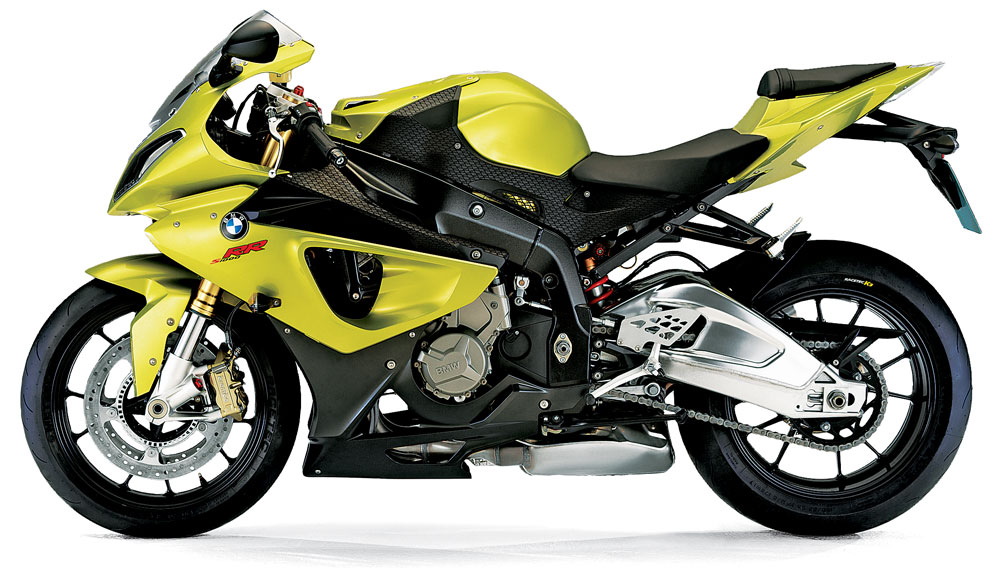 For more than 85 years, BMW has built well-engineered and eminently reliable motorcycles that have earned the company a reputation in some circles as the gentleman’s brand. In still other circles, these bikes have been rather unflatteringly dubbed “the pipe and slipper brigade.” This year, however, the Munich-based manufacturer intends to quash its polite persona with the introduction of its first superbike, the S 1000 RR.

The new model is a super bike, indeed. Entering the market as the most powerful one-liter production machine available, the S 1000 RR is equipped with a fuel-injected, inline four-cylinder engine that produces an astonishing 193 hp. In true BMW fashion, all of this irascible muscle is managed by the Dynamic Traction Control (DTC), which employs wheel sensors and sophisticated electronics to monitor and manage throttle application, engine rpm, and front- and rear-wheel speeds, ensuring the rear wheel does not spin up and send the bike and its rider into a dreaded high-side. In addition, an under-seat gyro calculates lean angle against rear-wheel slippage; if traction is lost, the electronics seamlessly cut fuel to the engine for an imperceptible millisecond to help prevent the bike’s back end from stepping out. Advanced Race antilock brakes work in conjunction with a front-to-back linked system, which automatically builds light pressure on the rear-wheel brake when the front lever is depressed, to provide superlative braking performance.

The dynamic, asymmetrical lines that divide the right- and left-hand sides of the bike down the center are most dramatically manifested in the front fairing, where the contrasting shapes of the low- and high-beam headlamps create a striking signature look. While those details are more an aesthetic statement, the sharklike gills on the right side are designed to draw air across the plain of the engine, and the fairing cuts on the left side help to cool the engine more efficiently by expelling that air, along with engine exhaust and built-up heat.

The combination of raw, visceral power, advanced electronics, and exquisite handling make the all-new BMW a formidable contender in the highly competitive superbike class—an impressive achievement for a first-model-year motorcycle. The S 1000 RR seems destined not only to shred BMW’s slipper-brigade image, but also to win over a new contingent of serious two-wheel sport enthusiasts who would never otherwise consider parking one of the German manufacturer’s mounts in their garage.