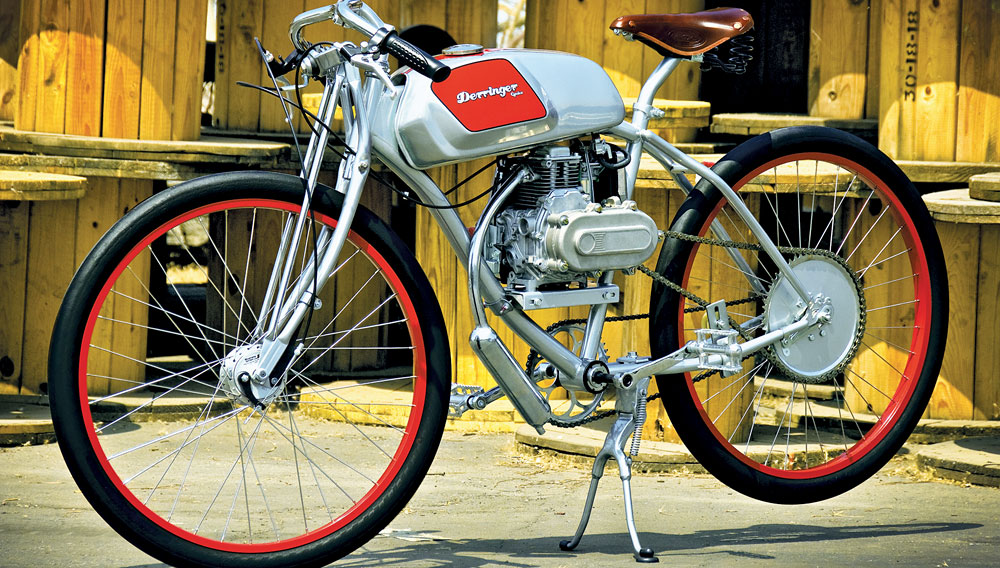 It is a tasty two-wheeled confection, a delicate retro-style moped inspired by board-track racers—those primitive motorcycles that in the early 20th century perilously rocketed around banked ovals made of wooden planks. Finished in custom colors and accented with pinstripes and machined-metal details, a Derringer looks like something that might have been ridden to the Five and Dime. But take a spin on one of these cycles—a motorcycle license is not required—and you will understand why they are named after a diminutive yet dangerous firearm. When a Derringer reaches its maximum velocity of about 40 mph, the speed feels breakneck.

The price for a Derringer starts at $3,500 and can escalate well beyond that figure when custom elements or elaborate finishes are added. Customers have requested inventive ornamentation, from 19th-century carbide headlamps to flask holders and even leather holsters, for the cycle’s namesake.

One buyer was so enamored with the race livery of a Porsche 911 GT3 that he had it re-created on his Derringer. Such customization might seem like a stretch for what is essentially a bicycle propelled by a lawnmower engine, but Adrian Van Anz, the industrial designer who founded Derringer Cycles five years ago in Los Angeles, is working on a one-off for which the Porsche paint scheme might be well suited: The cycle will be powered by a small jet engine.

A more practical version of the Derringer will offer smooth, silent, and emissions-free propulsion. It will be equipped with a battery-powered 750-watt electric motor, instead of the current version’s 180-mpg gasoline engine, and will achieve a top speed of 25 mph. Battery options for the engine will range from 9 to 20 ampere-hours.

The electric Derringer will feature a horseshoe-shaped frame similar to those of the board-track racers. The battery will sit low in the frame, in the bottom of the horseshoe’s U. The motor will be positioned in the rear hub, behind a mock fuel tank made of aluminum and carbon fiber. Van Anz will construct the frame out of either aluminum or steel—he has not yet decided—and he plans to offer a limited-edition titanium-frame model.

The similarities between a Der­ringer and a bicycle are numerous and include lightweight construction, pedal-assisted power, and a leather saddle. The current model’s pull-start 49 cc Honda engine fires up with a subdued hum that recalls a minibike. Twist the throttle, and you are on your way. A little pedal power will enhance the cycle’s pace off the starting line, especially for a Derringer built with the optional taller gearset.

When the cycle is at speed, the downturned handlebars yield surprisingly fast steering, and the skinny front tire digs in and changes direction rather suddenly. Riding a vehicle this slight so fast is an exercise in cognitive dissonance: It seems reckless, but it is irresistible. When prudence intercedes or necessity dictates, you activate the rear brake by pedaling in reverse, just as you would to bring a beach cruiser to a halt.

Van Anz says he did not initially think much of his design for the Derringer, and then he rode an early version of the cycle on a visit to Los Angeles clothier Fred Segal. “The people there went [wild],” he recalls. “Something about the design really connects with people.”