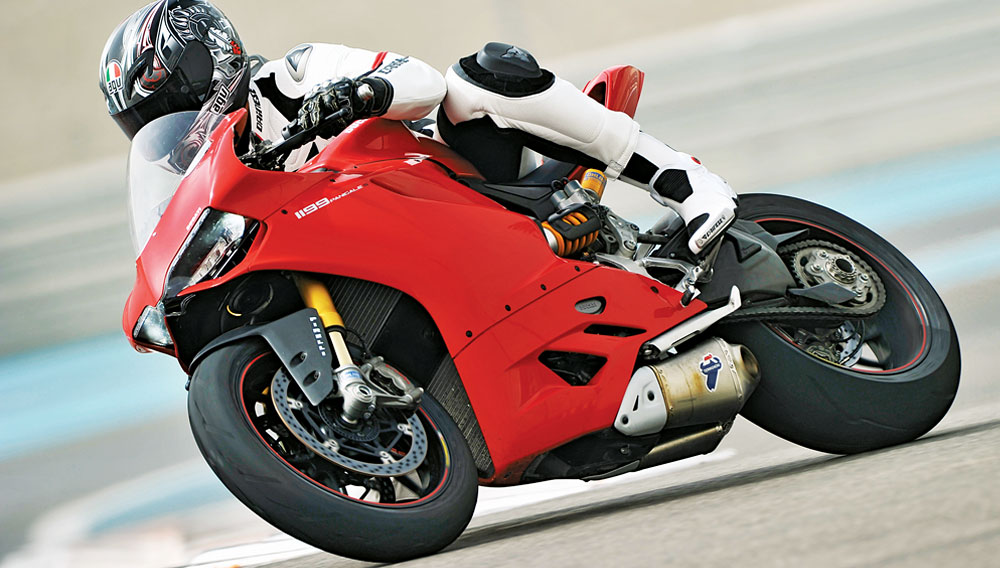 During a test-ride earlier this year on Abu Dhabi’s Yas Marina Circuit, the Ducati 1199 Panigale demonstrated its ferocity by reaching 170 mph on the straightaway, and showed its agility in the 3.4-mile track’s 21 turns. Even when a sandstorm covered the tarmac with enough desert debris for the Panigale to produce a small rooster tail, the bike continued to urge and enable steep lean angles and high speeds.

The 195 hp, 414.5-pound Panigale, Ducati’s first all-new superbike in more than two decades, has a power-to-weight ratio that is the highest of any production bike; it is close to that of a Formula 1 car. But just as significant, the bike offers a sense of command that encourages you to exploit that high-power–low-weight combination. Once committed to a lean, the Panigale embraces the turn and uses its dual-compound Pirelli tires to dig in crisply. The bike’s stopping capabilities are breathtaking, thanks to new Brembo monobloc brakes that, during the Abu Dhabi test-ride, produced gut-wrenching g forces as they repeatedly scrubbed off the high speeds.

Compared with its predecessor, the 1198, the Panigale has undergone dramatic mechanical changes. By replacing the 1198’s traditional trellis frame with a 9.2-pound aluminum monocoque, Ducati has peeled away 22 pounds. And by equipping the bike with a completely revised Superquadro 1,198cc L-twin, the company has added 25 units of horsepower. The engine boasts the broadest cylinder diameter of any sportbike powerplant and an oversquare (superquadro in Italian) bore-to-stroke ratio so extreme that, like the bike’s power-to-weight ratio, it approaches F/1 proportions. As a result, peak power arrives at 10,750 rpm.

All three versions of the Panigale—base ($18,000), S ($23,000), and Tricolore ($28,000)—are equipped with the same 195 hp engine. It is governed by an eight-setting traction-control system, a three-way engine-braking setup, and a quick-shift mechanism that enables clutchless gear changes. Antilock brakes are optional on the base and S models and standard on the Tricolore, which also features a data-acquisition system that measures the bike’s performance on the track to help improve lap times. All three versions of the Panigale feature a high-contrast TFT dashboard through which you can select one of the preset driving modes—Race, Sport, and Wet—or personalize the traction control, suspension, shifting configurations, engine mapping, and other settings.

In addition to the aforementioned upgrades, the Panigale—named for Borgo Panigale, the region of Bologna where the Ducati factory is located—has a repositioned saddle and handlebars. These changes not only relieve pressure on your back and wrists, but also lend a sense of control that will encourage high speeds on the corners of world-class race circuits or favorite back roads.