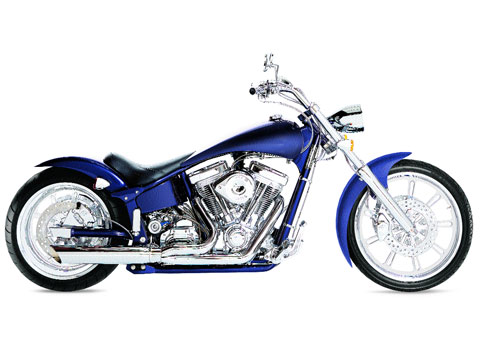 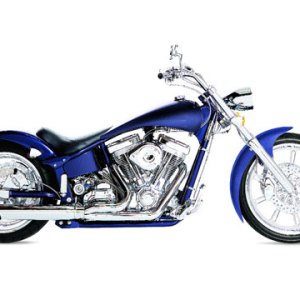 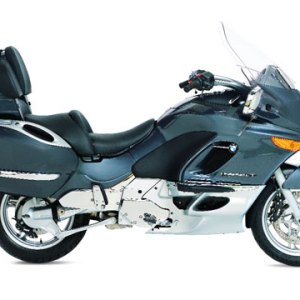 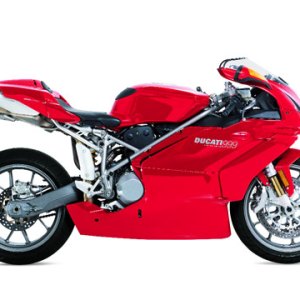 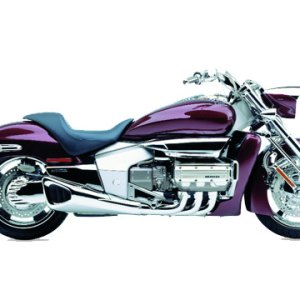 Brash and brutish, the American IronHorse Slammer, with its flaming paint job, stretched tank, and brilliant chrome accents, excels in catching eyes and stealing breath. One feature, however, stands out from the rest: the rear tire. The plump 240mm Metzler secures the back of the bike firmly to the ground, seemingly driving the machine forward with its massive girth.

As if to demonstrate that you can never have too much of a good thing, American IronHorse is considering an even wider 270mm tire for a future motorcycle, though in terms of performance, fatter is definitely not better. “It’s all about cosmetics and personal appeal with the big tire,” says company cofounder Tim Edmondson. “It will not make the bike go faster and will not let it go into a turn any faster. Actually, the bigger it gets, the more it may hinder the bike.”

Edmondson says that once owners get past the Slammer’s aesthetics, they soon discover that the motorcycle is much more than automotive artwork. The Slammer comes with an optional 5-speed right-side-drive transmission, which compensates for the rear tire’s size and distributes the weight of the machine closer to the center of the motorcycle. “It’s not just for show. It’s for show and go,” Edmondson says of the Slammer. “What surprises a lot of people is that it’s a damn good product.”

You can customize the $33,900 Slammer with your ideal paint job. For those who have not settled on a signature look for their bikes, the company’s six-person graphics department can lend assistance. “If there’s something in the back of your mind but you can’t get it out, these guys can read your mind,” Edmondson says. “If you want something different, you open up a world for these guys to have a ball.” —f.s.

To call BMW’s K1200LT the two-wheeled equivalent of the company’s four-wheeled 7 Series would be an accurate comparison. In addition to having a wide taillight and BMW’s trademark kidney grille, the LT (luxury touring) also swathes you in comfort and surrounds you with technology. You are cosseted with heated seats, cruise control, and a CD changer.

The LT’s Telelever fork and Paralever driveshaft eliminate dive-under braking and cushion the ride so efficiently that even with a passenger on board and full saddlebags and trunk, the 834-pound LT easily rolls through a twisty road. The liquid-cooled, fuel-injected, in-line 4-cylinder engine delivers plenty of pull, while the crisp 5-speed transmission shifts seamlessly to match the 1,171cc block’s power output. And if the LT begins to rumble faster than desired, triple-disc servo-assisted brakes bring the bike to a seamless stop, while the ABS serves as extra insurance. An upright riding position reduces fatigue, the electrically adjustable windscreen staves off offending gusts, and the supple yet taut suspension reduces vibration to acceptable levels.

For all of the luxuries that the 7 Series shares with the LT, the top-of-the-line $115,000 760Li cannot provide the pure, visceral, open-air exhilaration experienced by twisting the throttle on the $22,500 Exodus model of the LT line and leaning into a corner. That sensation is priceless. —Bill Stermer

The tao of the Ducati 999 is easy to achieve. Simply lean forward and grab the throttle, and you will feel as though you are one with the bike. For providing this sensation alone, the big red machine is worth its $17,695 price tag.

However, the 999 offers much more than ergonomic ecstasy; it is also easy on the eyes. When viewed from above, its silhouette, with the tank’s pinched waist and the flared seat, exudes sex appeal as only an Italian design can. The bold, white-faced tachometer set in the middle of the dash smugly proclaims the highest of revs, and the delicate wheels give the 999 a chic and stealthy appearance. “This is the most beautiful bike Ducati has ever built in its factory,” says former Ducati CEO Carlo Di Biagio. “It is faster, lighter, and more aerodynamic than any other bike produced by Ducati. It is the bike for the next decade.”

Ducati’s primary goal with the 999 was to create a user-friendly machine suitable for day cruising as well as track blasting. The 124-hp Testastretta engine turns out even more torque than its 998 predecessor. The power delivery is strong and seamless throughout the rev range, and the engine enters full song above 7,000 rpm. At three-digit speeds, the 999 is fast but not frightening, holding its line perfectly and eliminating any chatter over bumpy terrain. Andrea Forni, the head of Ducati’s testing department, credits the 999’s smooth ride to its double-sided swingarm, which increases static load on the front of the bike and keeps the machine planted on the pavement. “You can accelerate harder from a lower gear without being prone to wheelies,” Forni explains.

In other words, for all of its high style and performance capabilities, the elegant 999 remains firmly grounded. —f.s.

Why would Honda, a company known for mass-producing motorcycles, build the exclusive Valkyrie Rune? Honda Senior Manager Gary Christopher answers the question with a confident smile and a simple explanation. “We don’t want to sound cocky,” says Christopher, “but the real answer is because we can. And we’re probably the only company that truly can make something so intricate into a production machine.”

Amend Christopher’s statement to read extremely-limited-production machine; the company will most likely build from 1,000 to 2,000 Runes, although Honda will not confirm its specific plans.

The Rune began as an over-the-top dream—essentially, a concept vehicle that powered past the usual roadblocks of lawyers, marketers, and bean counters and onto the assembly line in Marysville, Ohio, next to Honda’s mainstream cruisers and touring bikes. Earlier this year, a number of buyers placed orders for the first Runes, which are expected to cost from $20,000 to $30,000, without ever seeing the bike in person.

The heart of the Rune is its massive fuel-injected engine, but its hot-rod body is the Rune’s highlight. Stylish details from its concept forerunner—the T2, a one-off show bike that Honda designed and constructed in 2000—have been incorporated into the Rune’s long, low, and finely sculpted chassis, giving it an appearance reminiscent of a custom bike builder’s one-of-a-kind masterpiece. The bike also features a rear suspension from the team’s world champion GP racer, and the largest brakes that the company has ever fitted to one of its machines.

Why design the Rune with such large brakes? Because, as Christopher says, Honda can. More important, because of its 1,832cc 6-cylinder engine, the Rune needs them. —Bill Heald