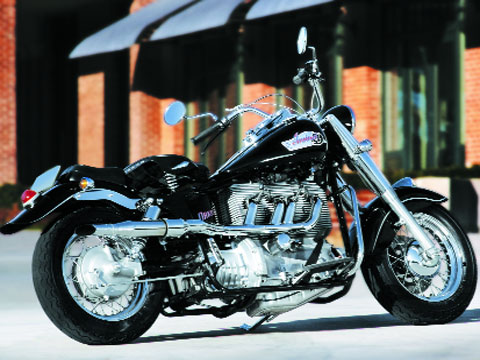 Wind-chapped cheeks and the occasional skinned knee only enhance the essence of motorcycling. It is the state of being one with the elements that invokes our passion for the pastime. Even better, the machines we ride today—and the best of those from past eras—boast aesthetic and technological wizardry that heighten the two-wheeled experience. ENJOY THE RIDE.

It looks like an Indian, sounds like an Indian, and is known as an Indian—except in the United States. Indian Motorcycles Ltd. (+44.131.557.5807) is a Scotland-based builder of heavyweight cruisers reminiscent of the vintage Indians that rumbled to life in Springfield, Mass., in 1901, a year before the birth of Harley-Davidson. The Scottish company, however, does not own the American trademark to the Indian name; that belongs to the Indian Motorcycle Corp. of Gilroy, Calif., which recently released the Chief and Scout models in the United States.

The Scottish Indian builds the $29,600 Indian Dakota Classic, a base-model cruiser, along with the Dakota Highway (which includes a windscreen and a double seat) and the $36,000 Dakota 4si (sport injection). The bikes feature 112-cu-in in-line 4-cylinder engines instead of the 100-cu-in Powerplus V-twin engines that propel their American counterparts. “We have a big, fat power band that delivers a high degree of torque,” says Indian Motorcycles Ltd. CEO Alan Forbes. “It’s ideal for highway cruising and holiday riding. We’ve got a machine that’s made for serious use instead of just screeching up and down the strip.” —f.s.

Two events in Italy this summer will offer riders some spectacular scenery—of both the landscape and motorcycle variety. On July 1, the Motogiro d’Italia, the preeminent road race of the 1950s, will commence for the third time since its revival in 2001.The five-day ride, which begins and ends in Bologna and winds through northern Italy, is open to vintage and modern models of any marque.

Later this summer (the August dates have not been finalized), the inaugural five-day Centopassi will lead riders over 100 mountain passes in the Italian Alps and across nearly 1,000 miles of roads. Riders from Ducati’s race team will complete the course and set a benchmark time, which other riders can attempt to beat on their own motorcycles. Anyone who bests the professional Ducati racers will be awarded a Multistrada, Ducati’s new enduro/sportbike hybrid.

For more information on either event, contact Dream Engine

Confederate Motorcycles, builder of the rugged Hellcat G2 cruiser, recently relocated its headquarters from Abita Springs, La., to the heart of New Orleans near the French Quarter. Confederate is welcoming prospective customers to its new location, where you can visit with company president Matt Chambers, take a tour of the facility, and test the Hellcat in the French Quarter and the New Orleans Northshore region. If you place a down payment on a Hellcat after your trip, Confederate will pick up the cost of your accommodations (for two days) and airfare.

Anyone who has already ordered a bike from the company has an open invitation to visit Confederate (504.561.9122, www.confederate.com) and watch the company’s craftsmen build his $52,000 Hellcat. —f.s.

If you are looking to expand your motorcycling adventures beyond the United States, the Alps—a crossroads of history, scenery, and shopping—offer some of the world’s most enticing riding opportunities. Last fall, with the guidance of Edelweiss Bike Travel, I took a six-day tour that included the Stelvio in Italy, which features nearly 100 switchbacks, and the single-lane Mendelpass, which rises 8,500 feet into the clouds and curves between Alpine lakes.

In addition to the winding roads, riding in the Alps can include confrontations with heavy traffic and occasional nasty weather. Needless to say, novices should look elsewhere. With Edelweiss, however, English-speaking guides will accompany your group and steer you toward the best roads and hotels. Rent a lighter, agile motorcycle such as a BMW R1150R or a Ducati ST4 to master the tight Alpine roads, and wear versatile riding gear in case of bad weather.

When MV Agusta (www.mvagustausa.com) declared bankruptcy and halted production last October, owners who had ordered new bikes held their collective breath until January, when Banca Intesa, a Milan-based bank, bailed the Italian marque out of bankruptcy and enabled production to restart. “Once we made a public official statement, there was a giant sigh of relief that went out across the country—reverberating first from here,” says Matt Stutzman, general manager of Cagiva USA, MV Agusta’s American distributor.

The SPR is MV’s premier racer. The F4 Ago, MV’s top-of-the-line motorcycle, may be better tuned for street performance, but it will be even more exclusive than the SPR: Fewer than 100 units will be delivered to the United States. “There were a lot of skeptics out there who thought this was the end,” Stutzman says of the bankruptcy. “But there’s no doubt whatsoever that it was always a matter of when, and not if, the bikes would be ready.” —f.s.

The lobster is back. Laverda (www.laverda.com), the Italian company that built the dominating 750 SFC racers of the 1970s, is returning to production. When the bike is released in September, the 1000 SFC, a 133-hp machine, will sport the quirky lobster-orange paint job that branded the marque in its heyday.

The 1000 SFC features a 60-degree, dohc V-twin engine based on the RSV Mille R built by Aprilia, which purchased Laverda two years ago. The single-seat Laverda, which has a top speed of 173 mph, is primarily a racer; its 77 ft lbs of torque at 7,500 rpm provides enough pulling power to whiz past competitors on track days, while front and rear Brembos bring the bike to a rapid stop.

The SFC is just as capable in more docile environments. The wheels are made of forged aluminum, reducing the weight of the Laverda and making it a graceful grand tourer for back roads and city streets. While the company has not released the price of the bike, Laverda has confirmed that it plans to build fewer than 1,000 SFCs. —f.s.