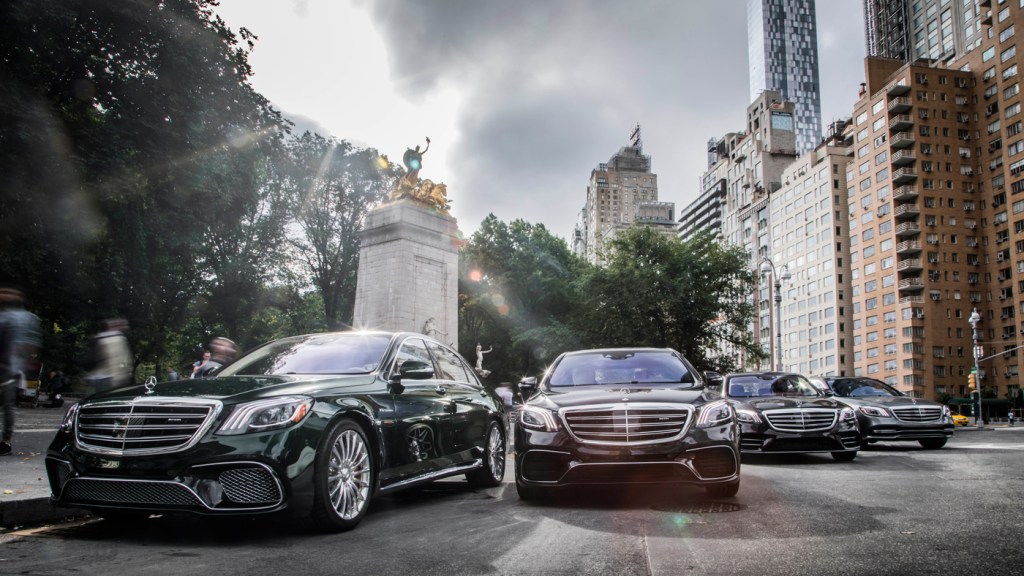 Kindly move out of the way, you belching garbage trucks and swerving yellow taxis: Royalty this way comes. It is the $230,000 Mercedes-AMG S65, the king of the Big Black Cars. The Mercedes-Benz S-Class is still one of the seminal executive carriers— one that, with its upright star emblem, seems like it’s been around forever.

Few automotive segments are as competitive as the flagship sedan. They have to be solidly luxurious and yet future minded. For the 2018 model year, Mercedes has again moved the goalposts, redesigning the interiors and exteriors; making engines more powerful; and adding the latest in future tech.

The irrepressible thrust of 738 ft lbs of torque was doing me little good on Manhattan’s West Side Highway, an ironically named roadway considering its omnipresent traffic. So I turned to one of the S65’s newfound strengths: Its semi-autonomous driving systems.

Though I moved steadily through those taxis and garbage trucks, my hands were in my lap and my feet tucked away. Mercedes’s latest suite of features comes ever closer to real autonomy. In the slow-moving traffic, I touched neither wheel nor brake for minutes at a time. I’d never been so relaxed driving through this stretch of New York City.

Heading north, past the George Washington Bridge, the traffic dissipated and I picked up speed. I left it to the computer and the car negotiated the sweeping turns just south of the Henry Hudson Bridge by itself. Another trick: Tap the indicator signal and the S-Class will change lanes if it’s safe to do so.

Eventually the system will ask—and then demand—that you at least place your hands on the wheel. It does so most urgently when lane markers are indistinct. But the latest iteration takes into account posted speed limits and even your destination when it is programmed into the navigation system. For instance, the car will automatically slow when you approach your freeway exit. This feels magical—and a bit eerie.

The cabin’s configuration of controls has also been enhanced. The instrument cluster and the infotainment system screens are conjoined into a long sweep of flush glass which extends from the driver’s side to the center of the console. And in a long-delayed victory of sensibility, Mercedes has finally moved its cruise control buttons off the multi-function stalk and onto the face of the steering wheel itself.

I did find some of the features a bit superfluous, like the “wellness” programs which change the interior lighting, put on uplifting or relaxing music, and waft in different scents throughout the car. (One promises a “cool, refreshing breeze [that will] whisk you away to the seaside.” Er, not so much.)

If you like to drive, you’ll love the steering, the linear power, and the sharp bite of the available carbon-ceramic brakes—a $9,000 option. If you prefer to just ride, the right-seat passenger is afforded options such as a reclining leather seat, table, and a mini-fridge. The Mercedes-Maybach models add an additional eight inches to the rear, allowing the left-rear passengers to also recline.

The interior of a 2018 Mercedes-Benz S-Class sedan from the pilot’s point of view.  Photo: Courtesy Mercedes-Benz.

The V-12 is satisfying, even if the engine hasn’t changed much since 2003. In contrast, the V-8 models are revolutionized. They lose displacement (4-liters, down from 5.5), but gain power. This is the result of a new design in which the turbochargers are placed inside the “V” of the engine. It’s a more efficient placement and limits turbo lag. And, in the S63, it produces miracles. In conjunction with a wet-clutch transmission (in lieu of the regular 9-speed torque converter), the S63 effectively dumps the clutch. Zero to 60 mph comes into the supercar territory of 3.4 seconds. Your noggin snaps back and lands in the ultra-soft head cushion.

That mix of coddling and power—and helpful technology—is why the S-Class remains an eternal contender for those shopping for a Big Black Car. After all, when you’re stuck in traffic, you just want to get away from it all.