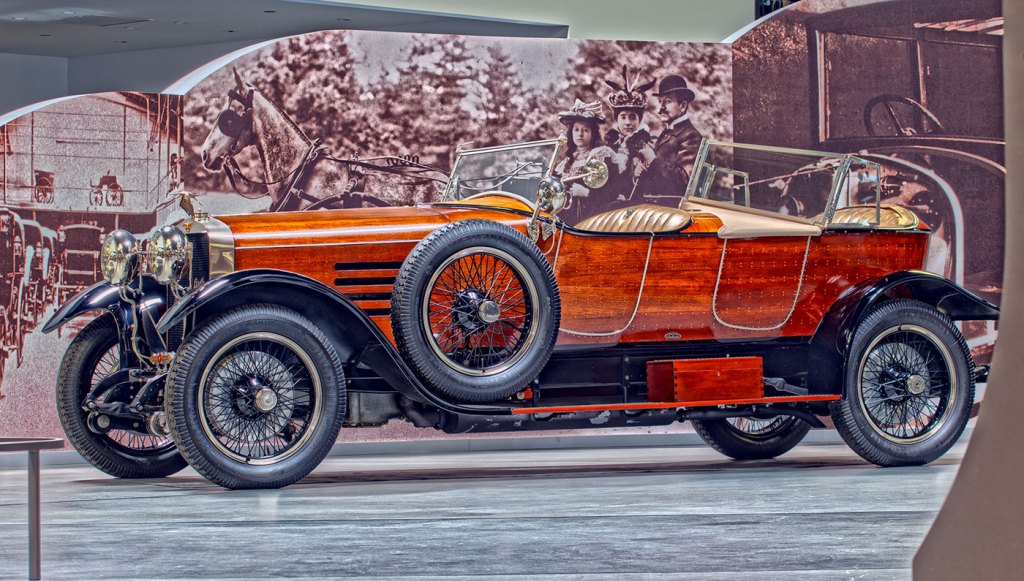 Opened on April 9, the Cars and Carriages exhibit at the Mullin Automotive Museum in Oxnard, Calif., distinctively documents the transition from horse to horsepower during Europe’s belle epoque, which took place between the late 1800s and the outbreak of World War I. Focused on the French, the collection comprises eight hand-built carriages from leading carrosseries of the day including Labourdette, Kellner, and L’Renault, as well as nine vintage vehicles from Bugatti, Panhard et Levassor, Darracq, and Hispano-Suiza, among others.

“It was a remarkable period of craftsmanship,” says Peter Mullin, renowned car collector and founder of the museum. “It was not unusual to have these exquisite carriages and cars being made side-by-side using the same tools and techniques.”

Among the restored rarities is a 19th-century Labourdette “Dog Cart” carriage created by blacksmith Jean-Baptiste Labourdette. Often used as a horse-drawn conveyance for hunting, it includes a compartment underneath for canine retrievers. Nearby sits a stunning example of a four-wheeled Phaeton by Million-Guiet from the same time. The open carriage derives its name from the mythic figure Phaethon, who set the earth ablaze when he lost control of his father Helios’ chariot of the sun. And a legend in its own right, a carriage built in 1930 by Ettore Bugatti and used by him on the family estate is also on hand to give insight into the marque’s equestrian connection.

Early mechanized marvels include a 1902 Panhard et Levassor Type B1 Rear-Entrance Tonneau. An engineering breakthrough, the car is one of the first to feature a front-mounted engine, a Daimler four-cylinder inline beast. Other innovations onboard are sliding gears and a chain-based final drive to the back axle. Artisanship and attention to detail are also exemplified in the 1922 Hispano-Suiza H6B Skiff Torpedo—inspired by classic wooden-boat design—and a 1922 Renault Type JV Phaeton Landaulet with coachwork by Kellner. The latter is a 19-foot-long convertible with 40 hp and patented power-assisted brakes.

“The equine influence on the early auto industry is unmistakable,” says Mullin. “These pieces of rolling sculpture wonderfully illustrate the progression.”

Complementing the Cars and Carriages presentation are Mullins’ assemblage of classic Le Mans racecars, as well as automobile-inspired fine art. In addition, an exhibition showcasing the works of select California artists will run through the end of the year. The museum is open to the public on the second and fourth Saturday of each month, and tickets ($15 for adults) must be purchased in advance. (mullinautomotivemuseum.com)