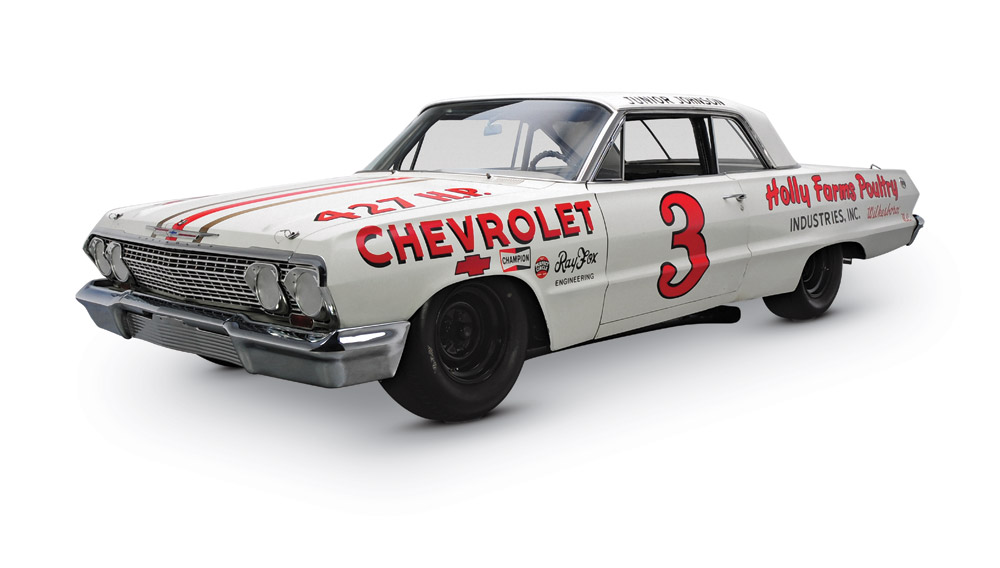 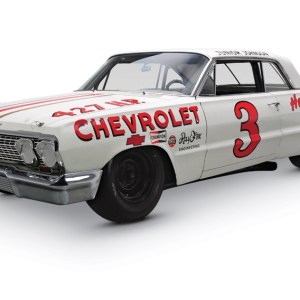 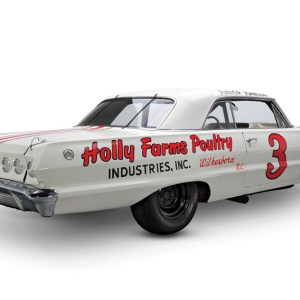 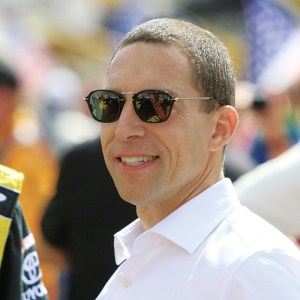 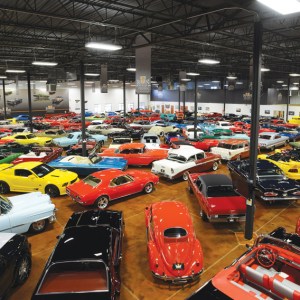 Rob Kauffman opens the door into his automotive showroom, and it is hard to know what to drool over first. Corvettes, Mustangs, Camaros, Firebirds—250 or so of the greatest expressions of speed, power, and ingenuity Detroit ever produced—glow as if they just rolled off the production line. Some of these cars are in Kauffman’s personal collection; the rest belong to RK Motors, his vintage car dealership in Charlotte, N.C. As Kauffman cuts left and walks toward his personal cars, the first one that commands attention is a black 1977 Pontiac Trans Am with a golden Firebird emblem emblazoned on the hood, wings spread wide, ready to hug the world at 100 miles per hour. All that is missing is Burt Reynolds leaning across the center console to kiss Sally Field.

A few cars behind the Firebird sits a 1963 Chevy Impala SS with a red “3” painted on each door and “Holly Farms Poultry” on the rear quarter panels. Kauffman points out the steering wheel, still wrapped in black electrical tape wound just so more than 50 years ago to precisely fit the meaty grip of NASCAR Hall of Famer Junior Johnson. The car remains almost unchanged from 1963, when Johnson won seven NASCAR races driving it, powered by a “mystery motor” that was soon outlawed. Kauffman plans to take this muscle-car-on-steroids to the Goodwood Festival of Speed, held every summer at the estate of Lord Charles March in England. “It’s an irreplaceable motor, so I’m not going to try to set the land-speed record with it,” he says. “I’m going to start it up and let people hear it run.”

The fact that Kauffman, a racecar driver and NASCAR team owner, eagerly anticipates cruising slowly up a driveway partly explains why he collects cars: He wants to share the rolling thunder escaping from under the hood. An equal opportunity car fanatic, Kauffman is as apt to wax poetic about his 1928 Bentley as he is about his Bandit Firebird. But he has always had a particular affection for American cars, especially muscle and pony cars—no surprise, considering his first two cars were 1967 Firebirds. When he talks about those cars, the word he uses most often is “fun.” He loves them for the glorious sound of their V-8s, for the way speed translates to the driver’s seat, and for the way driving one transports him to that era.

Take, for example, the 1970 Camaro that he races in the Historic Trans Am series. “What’s fun about it is you’re driving this beast with bias-ply tires and crappy brakes,” he says. “This is how Mark Donohue [the late and legendary driver] and those guys did it. Those guys were studs.”

His dealership, car collection, and NASCAR team do not completely overlap in a business sense, but they all spring from the same passion for loud things that go fast. He likes the NASCAR world because he likes the sport of racing, the camaraderie with like-minded individuals, and the thrilling but frustrating pursuit of trophies, which are given only to the most perfect combination of car and driver on each race day.

Kauffman’s obsession with cars dates back as long as he can remember—and even longer than that. “The story that I’ve been told, my first word was ‘mom,’ and my second was ‘car.’ That’s according to my mom,” he says. “Somehow, I came out of the factory that way.”

When he turned 13, his parents gave him those 1967 Firebirds from a junkyard, put them on blocks in their Mahopac, N.Y., backyard, and told him to build a car that worked out of parts from the two wrecks. “I froze my butt off for a winter trying to unfreeze rusted bolts,” he says. “At one point the lightbulb came on: They had paid $70 for the two cars. I sold the taillight of one for $20. I was like, Hmm, I still have a lot of stuff left. So I promptly changed my business plan to selling parts off of cars. I took that money and bought another one, and so on. That began my trading career.”

A few years later, when Kauffman had a job as a mechanic, his dad gave him advice that still resonates with him: If you go to college, maybe you could hire people to work on your own cars, rather than the other way around.

Kauffman, who is now 50, graduated from Northeastern University and launched a career in finance. He cofounded Fortress Investment Group in 1998. He sold his stake in the company to his cofounders in late 2012 in part so he could devote more time to his car passion, which had blossomed into several car and racing businesses. “You’ve heard that saying, ‘a mile wide and an inch deep?’” he says. “My wife says I’m an inch wide and a mile deep. I like cars, and I know about finance. Everything else kind of fades out.”

He bought cars here and there over the years and eventually decided he needed a place to store them. He chose Charlotte for its proximity to the East Coast, nice weather, and windy roads. It also helps that the city teems with car nuts, home as it is to almost every NASCAR team, including the one Kauffman co-owns, Michael Waltrip Racing.

Once Kauffman’s cars were in one place together, he proved his dad a prophet: He hired people to work on them. In 2010, he opened RK Motors, along with Joe Carroll, founder of Best Show Automotive. RK Motors buys and sells primarily classic American cars. Kauffman says he made “almost every mistake in the book” in the first few years of RK Motors, but the company sold 400 cars for roughly $35 million last year and is thriving now. Kauffman also owns a web site—www.myclassicgarage.com—that allows car collectors to catalog what they own. His personal account features 27 vehicles—all those muscle cars, as well as Ferraris, a Bentley, a Duesenberg, and more.

The tour of RK Motors over, Kauffman exits into a glorious spring day, 80 degrees, not a cloud in the sky. He opens the door to his 1963 split-window Corvette, arguably the most visually striking of that line of iconic Chevys and the car from his collection that he drives on his frequent trips to Charlotte. It is silver blue, the color of the ocean meeting the sky, and looks fast just sitting there. “Enough jibber-jabber,” he says. “Let’s drive a car.”

While some collectors stockpile cars but never drive them, Kauffman does the opposite. He sees little point in owning a car and never driving it. He buys cars to let them take him places, whether it’s to the drugstore or back in time. His 1960 Willys wagon, a forerunner to SUVs and Suburbans that he drives when he’s at home in Greenwich, Conn., does both. “Anyone can go to CVS in a Lexus,” Kauffman says. “But that thing? Top speed is 62 miles per hour, you’re grinding gears. It’s totally fun. When I bought it, the guy had done a total restoration—interior, headliner, inside, the wood on the inside, mechanical stuff. We paid a sum total of $27,000 for it. When I told the guy I was going to drive it, a tear almost came to his eye.”

He climbs into the ’63 Corvette. The numbers on the gauges pop like someone stenciled them in this morning. The interior is well kept but lived-in, with a guide to wineries, a duffel bag full of tools, and a fire extinguisher (a nonnegotiable requirement in all of his cars) scattered in the back. As Kauffman’s left foot pushes the clutch, his right foot feathers the gas, his right hand twists the key, and he brings the engine to life. It plays music to his carbureted soul, a roaring V-8 staccato beat that transcends all language barriers. “People say, ‘Rob, I can’t believe you drive it.’ I say, ‘I can’t believe other people don’t,’” he says.

He drives like a normal person, maybe even slower—usually, at least—partly because he fears other drivers and partly because he drives racecars 180 miles per hour, so going fast down the highway does not have the same effect on his heart rate.

Which is not to say he always follows all traffic laws. He owns another Corvette, a 1967 convertible, the Corvette of Corvettes, a car so cool that “Ode to Joy” should play whenever someone opens the door. A 427 cu in engine graces the engine compartment and creates 435 hp. He drove it recently from Charlotte to Martinsville, Va., and back to attend a NASCAR race. That is more than 250 miles round-trip, mostly on two-lane highways crisscrossing northern North Carolina and southern Virginia—beautiful, albeit blurry, countryside, the way he blitzed through it. “I can tell you that at 4,000 rpm in fourth gear the speedometer reads 110, and on the GPS it’s 98,” he says.

He likes Corvettes because the speed feels so much faster, especially relative to how speed feels in a supercar. Indeed, 100 miles per hour in the passenger seat of the 1963 Corvette feels every bit that fast and more. (Just kidding, officer.)

At a stoplight, a guy in a truck eyes the ’Vette with lust in his heart. Other drivers and men working on the side of the road honk, wave, and flash thumbs up. Kauffman waves back. Even the Willys wagon, which makes a school bus look sleek, draws similar reactions, he says. When Kauffman drives his 1958 convertible Eldorado, a cruise ship atop four wheels, old men tell him stories of their own Eldos. Kids often ask to sit in Kauffman’s cars, and he always obliges them, his way of paying his good fortune forward. “They’ll want a picture,” he says. “Sometimes the dads do too.”

None of the old men’s stories, none of the smiles, none of the pictures would happen if Kauffman kept his cars locked in a warehouse all day, as quiet and useless as an unskinned drum.“I’m lucky enough to have all this stuff, “ he says, “so I like to share it with people.”

Rob Kauffman buys what he loves—and uses it. Here is how he describes his philosophy on car collecting.

On buying: “It’s not a pie-eating contest. It’s not a matter of who has the most. Where I am right now, I have a decent number of cars. Each one I’ve got is to do something specifically that I couldn’t do with something else.”

On curating: “No matter how much money you have, no matter how much time you have, the one constraint you’re always going to come up against is you can only drive one at a time. I have a ’58 Eldorado Biarritz convertible. Big, boat, totally fun. When I bought that, I had a ’57 Bel Air convertible. From my standpoint, the occasion I would want to drive the Bel Air is the exact same I’d want to drive the Eldo. So I sold the Bel Air and got the Eldo.”

On his wish list: “Right now I don’t have any brass-era cars [pre–World War I cars with brass detailing], and I like them a lot. So I’m just kind of quietly keeping track of what’s at the auctions, what’s trading. Something will come up at some point that seems like it makes sense, the right thing at the right time. If it’s not this year, it could be 10 years from now. I plan on being around for a while, so it’s not a rush.”  —M.C.