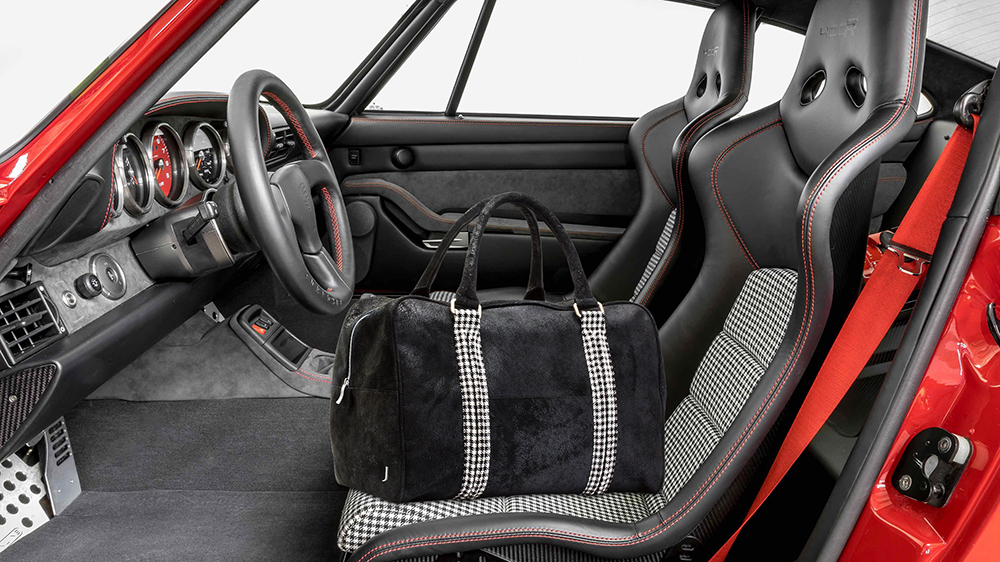 While most exotic automobiles are a canvas for personalization, the luggage brought along for the ride is typically anything but—which gave Nancy Gale an idea. The designer, who founded her Jamah handbag brand in 2000 and quickly developed an A-list client base—Brad Pitt and Channing Tatum have both been spotted toting her wares—has recently begun creating bespoke carryalls that perfectly complement exceptional vehicles, from contemporary supercars to sought-after classics. For Gale, it was the intersection of two childhood passions. “Living in Detroit as a young girl, I was always obsessed with cars and fascinated that we had this incredible vision for design in the Motor City,” she says.

A chance encounter with Peter Nam, the man behind Gunther Werks and its reimagined Porsche 911s, was the impetus for Jamah’s new Motorcar Collection of commissioned pieces, priced between $7,500 and $50,000, depending on the specifics. “Peter commented on the bag I was carrying, found out who I was, then immediately pulled me over to his Porsche, opened the frunk and said, ‘I need a bag for this,’ ” Gale recalls.

After that, automotive collector Bill H. Lyon asked her to create a purse for his wife in the same two-tone livery as his 1965 Alfa Romeo Giulia TZ2 racer. While that bag was made from anaconda—a nod to the Visconti serpent found on the marque’s badge—other available materials include Italian lambskin, crocodile and ostrich. Every piece is crafted in Los Angeles and features a philanthropic component, with a portion of Jamah’s proceeds going to Gale’s nonprofit charity, Ambition, which provides disadvantaged high school students with tools, training and connections to help foster entrepreneurism and includes all Jamah employees as volunteers.

Having showcased the Motorcar Collection at the Quail, a Motorsports Gathering, in August, Gale is presently collaborating with EV manufacturer Faraday Future. Of the growing demand for her work in elite automotive circles, she says, “It’s ironic, as I currently don’t own a car.”