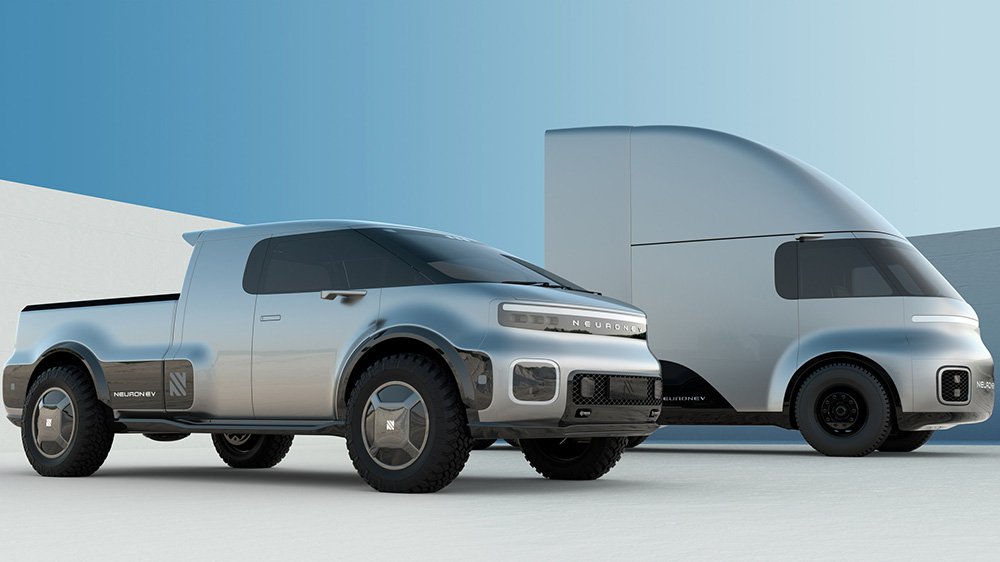 Weeks before the potential unveiling of the Elon Musk’s eagerly anticipated electric pickup truck, the California-based startup Neuron EV has beaten the tech mogul’s company to the punch.

The startup, which is located in Irvine, debuted two new truck concepts at the Shanghai Import Expo in China last week. Both vehicles, the T/One and Torq, make clear that Neuron has Tesla and its future lineup of electric trucks in its sights.

Like the company’s previous concepts, the MET and the STAR, both the T/One and and Torque are modular vehicles. Each has a basic cabin and chassis with interchangeable body components that can change each vehicle’s appearance and functionality.

Neuron has described the sleek T/One as an all-in-one electric utility vehicle meant for both personal and commercial use, and renderings show how it can be turned into either a pickup, SUV or camper. It sports a sleek, futuristic look with a windshield that blends seamlessly into the driver- and passenger-side windows and a full-width LED headlight. The commercial-only Torque commercial semi has a much more generic design that bears more than a passing similarity Tesla’s own Semi.

As with most concepts, Neuron’s unveiling was scant on hard technical details. The company did reveal that both vehicles feature a central, one-person driving position, are fully controlled via a single touch-screen panel and will have a battery pack that can be swapped out to extend the vehicle’s range. The T/One’s truck bed cover will also have a solar panel to help power the vehicle.

While Neuron wasn’t forthcoming about when either vehicle will go into production, we do at least know what the vehicles will look like, which is more than we can say for Tesla’s “Cybertruck.” While the company unveiled the Semi two years ago, it’s still unclear what its pickup will look like. The vehicle, which Musk has called “the coolest car I’ve ever seen,” was supposed to debut this summer before having its unveiling pushed back to October and then to later this month.