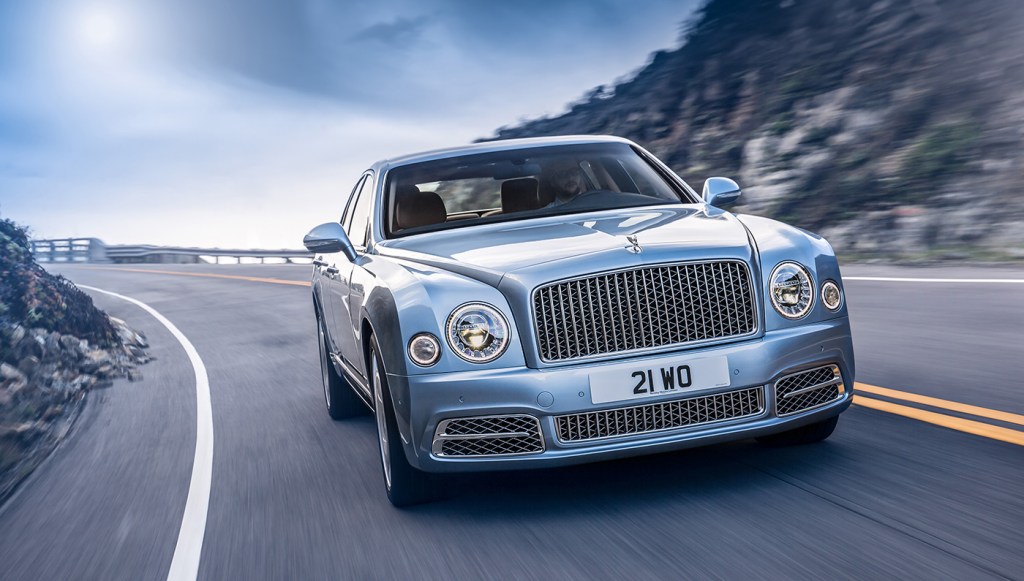 The suave sedan distinguishes itself from previous editions in both performance and appearance. Completely new chassis components (including active engine mounts and suspension bushes) and an air suspension system with Continuous Damping Control (which adjusts based on speed to maximize stability) provide a ride experience unequalled by predecessors. Comfort does not come at the cost of power, however, as the Bentley boasts a 512 hp, 6.75-liter V-8 engine (with 752 ft lbs of torque) managed by an 8-speed ZF automatic transmission. With a top speed of 184 mph, the fashionable four-door can dash from zero to 60 mph in 5.1 seconds.

Boosting performance even further, the Bentley Mulsanne Speed edition packs another 25 ponies of power (and an additional 59 ft lbs of torque) for a top speed of 190 mph and the ability to accelerate from zero to 60 mph in 4.9 seconds. A new Sport mode improves response by stiffening the suspension and dialing-in the steering dynamics for enhanced handling. Adding to the Speed’s refined athletic appearance are 21-inch, hand-finished alloy wheels; rifled sports exhausts; and specialized badging. Inside, the marque’s dapper Mulliner Driving Specification (with diamond-quilted seats, knurled gear lever, and drilled-alloy sport pedals) comes as standard dress.

Where the Mulsanne Speed has been developed to delight the driver, the new Mulsanne Extended Wheelbase version pampers the passenger. This is achieved with a wheelbase that has been elongated by almost 10 inches, adding more space for the backseats where electronically activated, airline-style leg rests lend additional comfort. Privacy is provided by electric curtains, but a rear-cabin sunroof lets a bit of the outside world in as desired. Business on the move is made more manageable with a rear center console equipped with USB ports, pen and cup holders, and storage space. Individual folding tables also are available as an ergonomically efficient add-on.

All three Mulsanne editions benefit from a reenvisioned front end that features newly designed components such as the vertical-vane, stainless-steel grille (measuring 3 inches wider than before) and the one-piece bumper, radiator shell, and hood—all serving to broaden the optical opulence. The added scope also carries over to the back bumper, which has been expanded by one inch in the lower corners. Improved LED headlights adapt to conditions and provide increased visibility, while B-themed taillights serve to further illuminate the brand.

Elegance already intrinsic to Bentley interiors has been enhanced with lavish use of either fluted or quilted leather for seats and door trim (available in 24 colors), a choice of 13 veneers for the 40 cabin pieces, and brilliantly detailed brightwork. Both driver and passengers are treated to a new touchscreen infotainment system with 60 gigabytes of media memory. Those in the back also have access to 10.2-inch Android tablets (inset in the seats facing them) that easily connect to the inboard 4G Wi-Fi system. And the option to install a Naim OEM audio system (developed specifically for Bentley) that harmoniously integrates a 2,200-watt amplifier with super tweeters and 20 speakers will be music to any new owner’s ears.

The Bentley Mulsanne model range will be unveiled at the Geneva International Motor Show now through March 13. (bentleymotors.com)