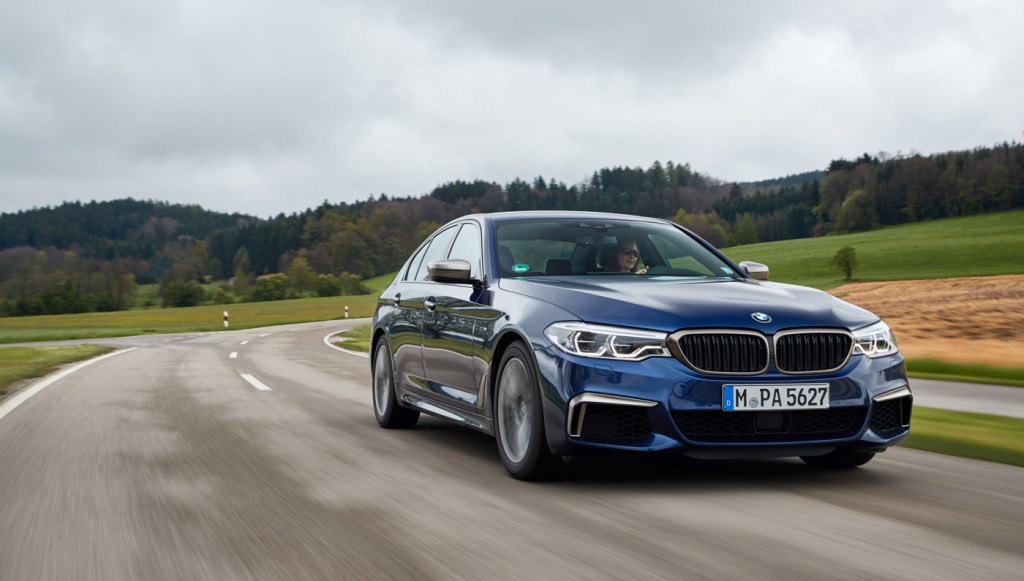 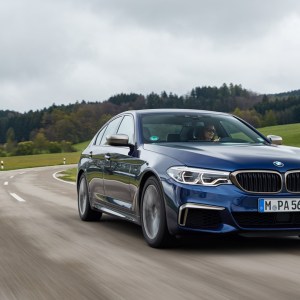 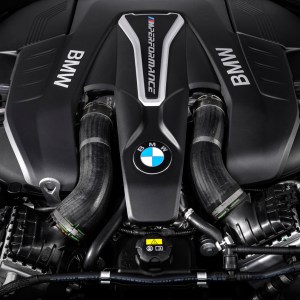 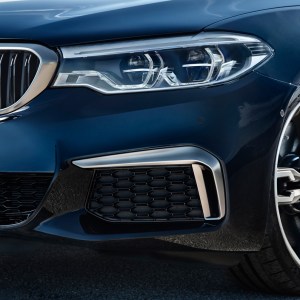 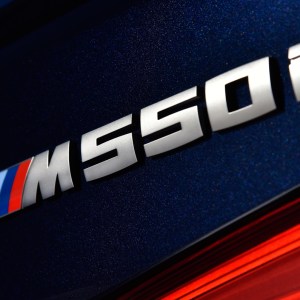 It’s been more than three decades since BMW first put an M badge on its midsize 5 Series sedan. The initial M5, known to enthusiasts as the E28, made 280 hp from a 3.5-liter inline 6-cylinder engine. With less than 2,200 examples produced, it is considered one of the rarest production cars in BMW’s portfolio.

Five generations later, the marque has fitted a beefy V-8 engine under the hood of the newest BMW 5 Series, added a sport suspension, bigger brakes, and all-wheel-drive, and dubbed its creation the M550i. Although it’s not a full-blown M5 (that’s expected later this year), the M550i is the quickest and most powerful 5 Series to date. It makes 456 hp and does the zero-to-60 mph dash in less than 4 seconds—faster than the outgoing M5.

Peter Quintus, vice president of sales and marketing for BMW M, tells us, “We have business customers who want something sporty—but not a full track car.” Like the BMW M760i that came before it, the M550i xDrive is part of BMW’s new “M Performance” series. Comparable to the Mercedes-AMG 43 lineup and Audi’s S line, M Performance splits the difference between the standard series cars and official M cars. On an unseasonably cold week in Germany, we drove the M550i through snow, ice, and rain from the Alpine town of Berchtesgaden to Garching, the home of BMW’s M offices north of Munich. Although the standard 19-inch summer sport tires had been replaced with 18-inch winter tires for safety purposes, we were still able to wring plenty of fun out of the car.

Winding our way down through the mountains, the M550i remained poised due to the precise steering and rigid chassis for which BMW’s M division is known. The M550i sits 10 mm lower than the standard 5 Series and, as with purebred M cars, comes standard with an adaptive sport suspension, customizable settings for steering, throttle response, and shift points. As a ’tweener car, engineers have done a superb job finding the balance between comfort and performance. In Sport and Sport plus modes, the 8-speed Steptronic transmission holds gears longer to make the most of the M550i’s 480 ft lbs of torque, but it doesn’t feel twitchy or overly aggressive (there are also paddle shifters for manual gear changes). At its firmest settings, the suspension holds the car to the pavement but isn’t teeth-shattering. The exhaust note is not as burly as that of an M5, but is pleasant and satisfying, not overly whiny or obtrusive.

On narrow backcountry roads, we pass fields dotted with melting snow atop emerald grass, whizzing by freshly shorn sheep who sorely miss their coats. Cows perk up their ears and follow us with their eyes as we brake hard and take the corners. Unlike the rear-wheel-drive M5, the M550i uses xDrive, BMW’s intelligent all-wheel-drive system, for added traction on slippery roads. Optional rear-axle steering, which we weren’t able to sample on our test cars, makes for even more grip—and more speed—around corners. Subtle exterior tweaks that distinguish the M550i from the standard series cars include an aero kit with rear spoiler and a gray metallic trim on the front grille, exterior mirror caps, and side air breathers. Optional 20-inch wheels are painted in a matching matte gray finish. Inside, the M550i gets leather sport seats, a thick M sport steering wheel, and a unique instrument cluster. As with the standard 5 Series, the M550i’s interior is fitted with BMW’s usual navigation and connectivity functions, though when compared with the wide panoramic displays and breathtaking interior design of the Mercedes E-Class, the BMW looks relatively spartan.

On the autobahn, the vehicle’s power band proved smooth and seamless. Tiny European cars scrambled out of the way as our ringed LED headlights bore down behind them. In areas with no speed limit, and even in the wet, we effortlessly ratcheted the 4.4-liter V-8 (equipped with dual twin-scroll turbochargers) up to a cruising speed of about 140 mph (the top speed is electronically limited at 155 mph).

As with the new 5 Series sedan, the M550i is available with a package of advanced safety features such as forward collision warning, lane keep assist, and adaptive cruise control, but these aren’t as sophisticated as the suite of semi-autonomous features found on the current Mercedes-Benz E-Class. However, with the M550i’s capable, driver-oriented dynamics, you won’t want to relinquish control for a single moment. (bmwusa.com)