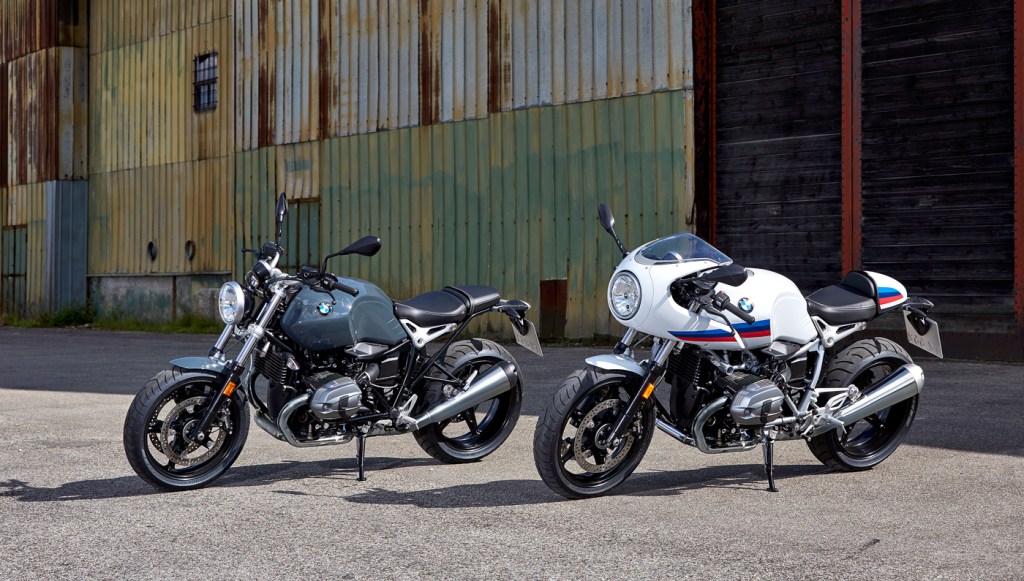 Henry David Thoreau’s words “simplify, simplify” are aptly aligned with the “café racer” culture that has captured the fancy of a good many motorcycle enthusiasts. The movement is vested in a yearning to recapture

the pure, uncomplicated essence of riding, with roots in a simpler time when motorcycles were unencumbered by the plethora of technical gadgetry inherent in modern machines. In 2013 BMW helped usher the retro category to new heights with its immensely popular R nineT Roadster.

For 2017, BMW broadens the scope of its retro-inspired “heritage” lineup, creating two new models for the Roadster’s stable: the BMW R nineT Racer and the R nineT Pure. Preserving the essential theme, both bikes use the R nineT as a base platform, sharing a frame and the stalwart Boxer Twin engine. From there, however, the two have distinctly diverse characters.

The 483-pound Pure is a well-balanced amalgamation of straightforward style and function, with a comfortable upright seating position. Presented as a bare-bones motorcycle, it is intended as an open canvas for personalization with the help of an impressive offering of BMW factory performance parts and accessories exclusive to the R nineT line.

The 485-pound Racer is a focused canyon carver, with clip-on handlebars that put the rider into a racing tuck behind an old-school bubble fairing. Deriving its design cues and aggressive riding position from superbikes of the ’70s, the Racer has a sleek profile and flowing lines that carry through from the half fairing to the tail hump, augmented with a dynamic white racing livery.

At the heart of both machines is the air-cooled 1170cc, DOHC Boxer powerplant, which delivers 110 horsepower and 86 ft lbs of torque, imbuing the light machines with an impressive, visceral punch. The superlative performance of the Boxer engine gets to the pavement via a 6-speed transmission and shaft drive. And stainless-steel two-into-one exhaust pipes deliver the Boxer’s signature growl.

For versatility, the frame on both bikes has a removable sub section, providing easy transformation from a two-up riding configuration to a single seat with tailpiece—sans passenger pegs—for a clean, uncluttered look. Telescopic forks (an upside down version on the Racer) and BMW’s proven Paralever rear suspension system grace the Pure and the Racer with a compliant, smooth ride.