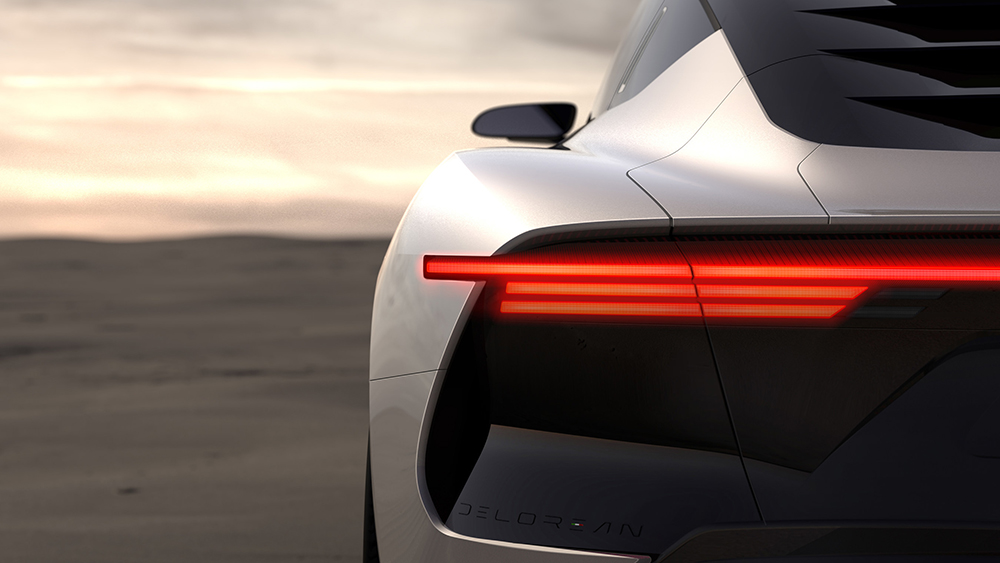 In February, DeLorean Motor Company confirmed the DMC-12 sport car would be making an electrifying comeback as an EV. Now the marque has divulged a few more concrete details about the reborn ‘80s icon.

As previously reported, the battery-powered ride will make its official debut on the prestigious awards ramp at the Pebble Beach Concours d’Elegance on Thursday, August 18.

“Excitement is rising like the doors of our iconic sports car, and we are revealing the next generation prototype three days earlier than planned on the most prestigious stage at Pebble Beach,” Troy Beetz, CMO of DeLorean Motor Company, said in a statement.

The first teaser of the battery-powered DeLorean was released in February.  DeLorean Motor Company

DMC adds there will be a series of activations and events showcasing the long-awaited concept car, during which the official name will be finally revealed.

In addition, the automaker shared the first official image of the next-gen four-wheeler. The new teaser, which is a little better than the simple silhouette shared in February, showcases the left shoulder and back tail light of the successor.

Penned by Italdesign, the modernized DeLorean takes cues from the retro DMC-12 that famously appeared as a two-door time machine in 1985’s Back to the Future. Like Marty McFly’s wedge-shaped vehicle of choice, the new EV features the original’s trademark gullwing doors and louvers. It also appears to sport the original model’s silver hue.

The iconic original DeLorean from the ’80s.  DeLorean Motor Company

There are certainly differences between the two, which the detail photo makes clear. The image reveals a car with a sleek, arched roofline and far more curves than its angular ‘80s counterpart. It’s also equipped with contemporary taillights that appear to wrap around the sides of the body.

Of course, the biggest change is the new edition’s all-electric powertrain, which will be reportedly sourced from another company. CEO Joost de Vries previously shared that the setup will result in a solid 300-mile range. We suspect it’s also likely to deliver more grunt than the original’s 2.85 liter V-6, which produced a rather modest 130 hp and 160 ft lbs of torque. The new motor will also be whisper-quiet and produce zero carbon emissions.