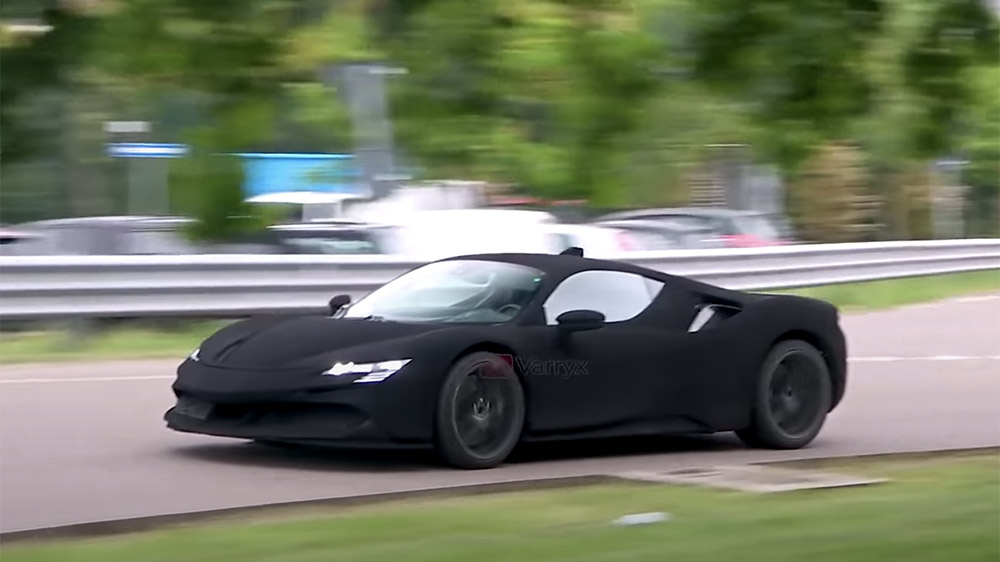 Late last week, a mysterious supercar was spotted zipping around the streets surrounding the Italian marque’s Maranello factory. This wasn’t just any digi-camo-covered test car, either. Instead it’s finished in a striking Vantablack-like hue and emits a distinct warble that has enthusiasts wondering if it’s the brand’s next hybrid.

Automakers cover test cars in garish camouflage so that their design, aside from the general shape, is hard to make out. But Ferrari has taken things a step further with its latest prototype. It’s unclear if the car is actually covered in Vantablack, a pigment developed by Surrey NanoSystems that absorbs 99.965 percent of light, but the vehicle’s matte hue is so black that it’s all but impossible to perceive any of details. The eagle-eyed enthusiast who captured the footage also said that the color made it hard for the camera to even focus on the moving vehicle.

Based on shape alone, though, the car’s body looks to be quite similar to that of the SF90 Stradale, Ferrari’s first hybrid. Interestingly, the prototype was captured in two videos last week, both of which were posted to YouTube on Friday. In the first, the car is finished in just the Vantablack-like color; in the second, silver stickers have been added to the body and lights. It’s possible the videos may show two different test cars, but the shape and flat black base suggests they’re at the very least of the same model.

The clips feature another tantalizing clue of what’s to come: engine sound. In both videos, but especially in the second, you can hear the prototype’s engine purr loud and clear. That mill produces a warble distinctly like that of a V-6, Motor1.com points out, suggesting that the prototype might be the marque’s long-rumored V-6 hybrid supercar.

In February, reports circulated that that car would have a hybrid powertrain composed of a twin-turbocharged 3.0-liter V-6 and a smaller electric motor that would produce a combined 700 hp. The vehicle, if it goes into production, would slot in under the 986 hp SF90 Stradale and possibly replace the F8 Tributo.

Ferrari did not immediately respond to a request for comment about the test car.

The fact that a new supercar is being tested on the streets of Maranello does suggest that more details should follow soon. While some purists may shake their heads at the thought of a V-6-powered Ferrari, let alone a hybrid, we fall into a different camp: Any new offering from the Prancing Horse is a reason for excitement.