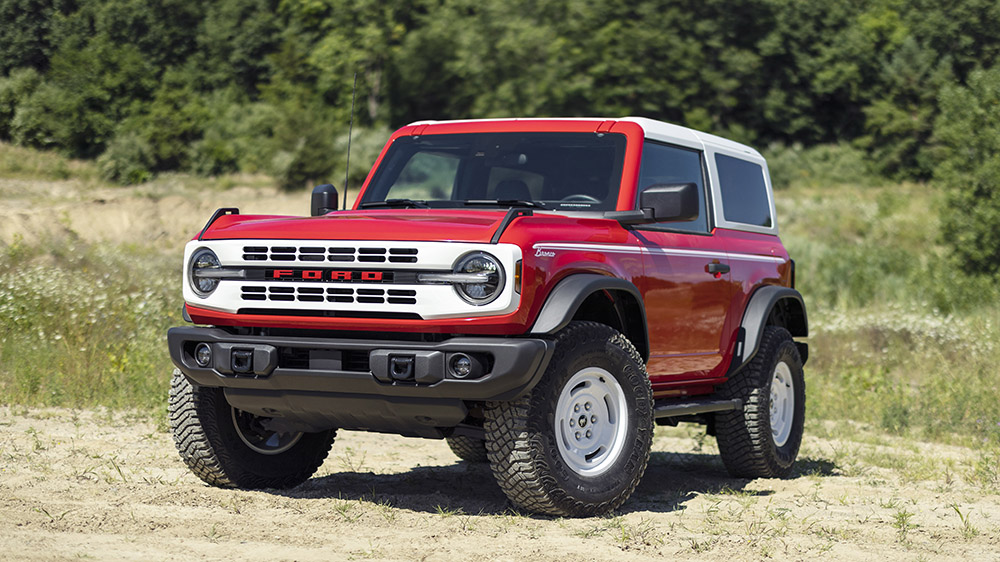 Ford is using the new Bronco to turn back the clock.

The Detroit auto giant unveiled a series of Heritage Edition variants of its ultra-popular SUV on Thursday. The exclusive models all feature designs inspired by the first Bronco from 1966.

Just like the GT before it, the Bronco Heritage Editions are meant to pay tribute to the nameplate’s rich history. And what better way to do this than by going back to the 1966 model that helped kick off America’s love affair with the ultra-capable 4×4. The entire Bronco family—including the two-door, four-door and Sports models—will be available in either the Heritage or Heritage Limited trim packages. Only 1,966 units of each version will be built, to commemorate the year of the Bronco’s debut.

Both the two- and four-door Bronco are available in either of the special trim packages. Heritage units get a two-tone paint job that includes an Oxford white hard top, grille, wheels and graphics. These Broncos are based on the Big Bend trim and come with a 2.3-liter EcoBoost inline-four that can produce 300 hp and 325 ft lbs of twist and is mated to either a 10-speed automatic or seven-speed manual transmission. The Heritage Limited Bronco, meanwhile, is based on the Badlands trim and features special badging inside and out. Under its hood, you’ll find a 2.7-liter EcoBoost V-6 that pumps out 330 horses and 415 ft lbs of twist. It will only be available in one color at launch, Robin’s Egg Blue, but a second, Yellowstone Metallic, will be available in late 2023. Both versions have 17-inch wheels wrapped in 35-inch Goodyear mud tires.

The more compact Bronco Sport crossover may not have made its debut until 2020, but that’s not stopping the Blue Oval from giving it the Heritage Edition treatment as well. Heritage units feature lots of white accents and are again based on the Big Bend trim. They’re powered by a 1.5-liter EcoBoost that produces 181 hp and 190 ft lbs of torque. The Heritage Limited, on the other hand, is also based on the Badland trim and packs a 2.0-liter EcoBoost inline-four that generates 250 horses and 277 ft lbs of twist. Unlike its bigger sibling, it’s available in three colors: Robin’s Egg Blue, Yellowstone Metallic and Peak Blue.

Click here to see all of the photos of the new Ford Bronco Heritage Editions.