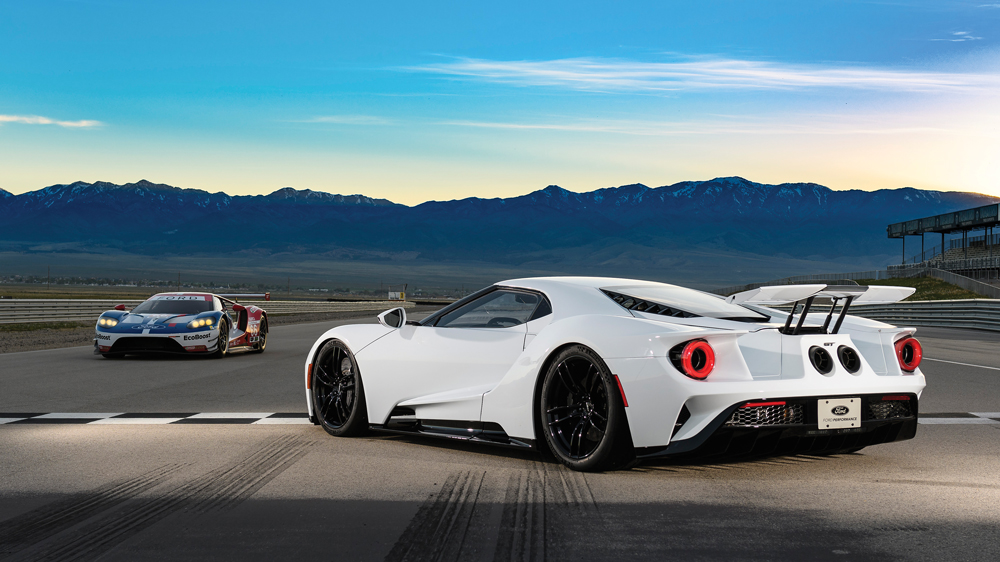 Original Ford GT40s are the most legendary competition cars in the marque’s history. Today, they are coveted treasures whose value and significance are reflected not just in their beauty and performance but also in the pivotal role they played in the company’s domination of motorsports during what is arguably racing’s most exciting period. After a failed Le Mans effort in 1964, Henry Ford II had Carroll Shelby work out the kinks in the newfangled mid-engine GT40 and turn it into a Ferrari-beater—which it did, taking 1-2-3 victories at Daytona, Sebring, and ultimately Le Mans in 1966. Despite the split-second politics that deprived Ken Miles (who would die shortly afterward during development testing on the track) of his rightful first-place finish among the three cars, the en masse domination over its Italian competitor proved the mettle of Ford’s GT40.

The GT40 (the number is the car’s height in inches; measure it out and imagine driving something that low) became the Blue Oval’s halo for decades to follow. Between 2004 and 2006, the company briefly resuscitated its icon as the Ford GT, building 4,038 examples. The rather self-conscious and deliberately retro design was larger than the original and was Ford’s first true supercar in the modern sense, though its lifespan was short and—unlike with its forebear—the factory had no intention of racing it. A 10-year dry spell followed with no worthy heir to rub shoulders with fancy foreign rolling stock, on the track or on the street. Now, with the 2017 Ford GT, they can rub shoulders—or just stomp to death.

That happened in 2016 at Le Mans, when Ford’s new GT took the victory podium as overall winner in the GTE Class, exactly 50 years after the GT40’s hat trick in 1966. The winner was No. 68, the Floyd Chip Ganassi Racing Ford GT driven by Sébastien Bourdais, Joey Hand, and Dirk Müller. Ford’s No. 69 scored third place, with Nos. 66 and 67 finishing fourth and ninth, respectively. What’s remarkable is that Ford’s return to Le Mans happened with a car that had turned a wheel in competition for the first time only a little more than a year prior. The development program that began in 2013, code-named Project Phoenix, had a broader aim—creating not just a world-class race car but one that would be a laboratory for new technologies and advanced materials, innovations that would eventually trickle down to everyday Ford production vehicles. With the GT, engineers focused on the engine and aerodynamics, underpinned with new applications of lightweight carbon fiber, to prove the endurance and efficiency of the design—for both the 24-hour race and use on the highway.

Development work on the GT was done by Ford Performance, an amalgamation of formerly independent divisions within the company—Ford SVT, Team RS, Ford Racing, and performance vehicle parts—brought together to enhance collaboration and efficiency. The GT’s manufacturing takes place in Toronto at Multimatic, Ford’s build partner specializing in complex systems for road and race applications.

That the core of the GT is a carbon-fiber monocoque is no surprise. Incorporating a built-in roll cage, the lightweight tub is the core around which the entire car is “hung.” Impressive machined-aluminum castings are bonded to each corner of the tub, with suspension and steering subsystems attached. The chassis features a keel design that positions inboard suspension attachment points near the centerline of the car to exploit the benefits of the F/1-style pushrod design. This hydraulic suspension system changes the ride height with a turn of a knob, adjusting drive modes that change spring rates and lower the car from 4.7 inches on the street to a ground-​skimming 2.7 inches in track mode. At the rear, a patented wing automatically deploys at speed. Like other supercars whose real-world use is compromised by speed bumps and driveways, a front-lift system raises the GT when activated by the driver and lowers it when the car reaches a speed of 25 mph.

Reduced weight, lots of power, and aerodynamic efficiency compose the trifecta that makes the GT such a successful design. Weighing just 3,054 pounds, the GT has a slippery shape—the work of Ford design director Christopher Svensson—that is radical for a road car and is clearly aimed at achieving one task: winning races. Each body panel is fabricated from carbon fiber, necessary to achieve complex forms like the aerodynamic flying buttresses at the rear—shapes impossible to realize in aluminum. Indeed, every surface is optimized to make the GT as aerodynamic as possible, including movable flaps around and under the body that reduce drag and increase downforce to enhance road-holding capabilities, braking, and, of course, acceleration, which the GT does very quickly.

Its mid-mounted engine is a radical departure from the expected, and it shines a light on Ford’s EcoBoost technology in a compact 3.5-liter aluminum V-6. Developed in tandem with the F-150 Raptor—Ford’s high-performance off-road pickup truck—the engine makes 647 hp at 6,250 rpm in street trim, with 550 ft lbs of torque at 5,900 rpm. The “truck engine that won Le Mans” achieves horsepower and torque on par with higher displacement, normally aspirated engines by combining anti-lag turbocharging with direct fuel injection. The 30 percent improvement in fuel efficiency and 15 percent lower greenhouse-​gas emissions are collateral benefits. Paddle shifts or automatic gear changes happen through a Getrag 7-speed dual-clutch transaxle to achieve a top speed of 216 mph. The estimated time from standstill to 60 mph is under 3 seconds. Importantly, transmission ratios are so flexible that most of our hard-charging track session was accomplished in third gear—all the better for this middling driver to concentrate on negotiating the circuit without the added distraction of shifting.

That track session was held last year at the Utah Motorsports Campus in Tooele, about 30 miles from Salt Lake City. Home to the Ford Performance Racing School, the circuit was chosen as the venue for the international launch, where a row of gleaming GTs were prepared for takeoff like fighter jets on a carrier deck.

Instead of a canopy, the GT’s large doors open out and up. Complex in design (the hinges are engineering art), they reveal an interior with wide sills and narrow, nonadjustable bucket seats
that one rolls into backside first. Seats are separated by a very narrow center console. The digital instrument panel, flat-bottomed steering wheel (its hub is home to myriad functions), and pedal cluster all adjust together—up and down, in and out—keeping the dash at more than arm’s length. Stab the console-​mounted start button, and the V-6 barks like a kennel of foaming, rabid hellhounds.

The Backstory: Journalist Matt DeBord was with us during the GT launch in Utah, and we talked about his new book, Return to Glory: The Story of Ford’s Revival and Victory at the Toughest Race in the World. Consider this engaging book a palliative, perhaps, for those not able to acquire the car itself.  Photo: Courtesy Shutterstock/Picsfive

Leaving the pits, the GT accelerates brutally and reaches third gear by the time the car is into the first turn. The car is wide, low, and unfazed by camber changes or bump strips. Hydraulic—not electric—steering is lightning quick and communicates every nuance of the road’s surface. Brakes allow the best drivers to wait until the last nanosecond before entering a turn yet confer a sense of well-being on the rest of us, for whom the Ford GT is designed to be a long-suffering supercar. However, it is one that responds best to an authoritative and accomplished hand.

While Ford hopes to see many GTs piloted on the track by new owners, the car acquits itself just fine on public roads—and the more curves, the better. We took a 3-hour drive through Utah’s beautiful countryside and up into the mountains, savoring manual paddle shifts and the crescendo toward the V-6’s 7,000 rpm redline. The turbo’s exhilarating whoosh adds character to the ripping exhaust, but for longer drives—especially on the highway—the GT’s soundtrack and spartan interior can become a bit tedious.

Inevitable comparisons will be drawn to mid-engine Audis and Ferraris as well as Lamborghinis, McLarens, and the most powerful Porsche 911s—all of which are, apart from Lamborghini’s Aventador, priced south of the Ford’s $453,750 MSRP. The GT is not just costlier and rarer; it is also a decidedly more single-purpose machine. There is no luxury here. It makes no concession to fad or fashion and doesn’t care what you think about its paucity of pistons, lack of all-wheel drive, hoarse engine timbre, or parsimonious luggage capacity. While “racecar for the street” is frequently misapplied, it’s a particularly apposite descriptor for this remarkable car.

All the more remarkable is the fact that those desiring to acquire one probably won’t have the chance. With Ford’s commitment to build just 1,000 examples over 4 years, GT ownership will remain a largely theoretical proposition for most. And there’s nothing democratic about the process of allocation. After Ford executives and VIPs get theirs, the video résumés, racing accomplishments, and even social-​media standing of other applicants will be reviewed, with only a fortunate few likely to be pronounced worthy. With demand far outstripping supply, the Ford GT is a competition car in more ways than one.