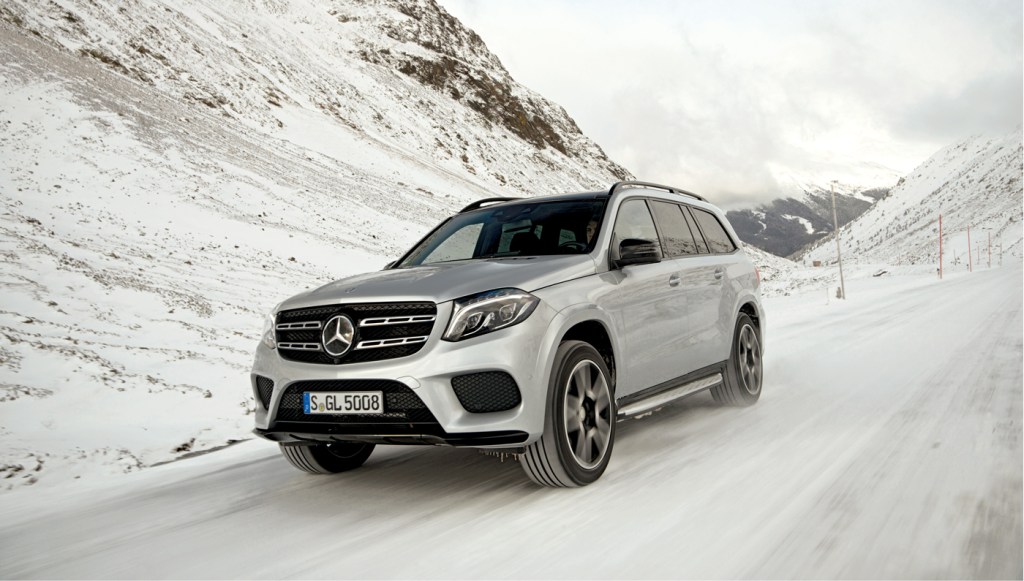 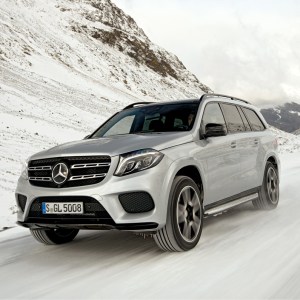 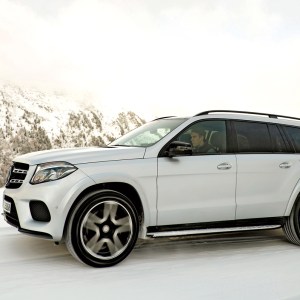 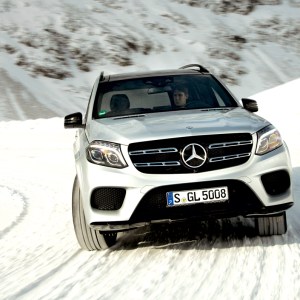 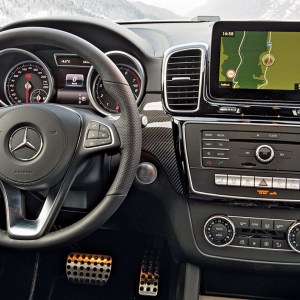 In a drive through the Austrian Alps, the Mercedes-Benz GLS550 4Matic provides high levels of comfort and performance.

A light freezing rain throughout the night had left slippery conditions in the morning. Nevertheless, we were going to resume the drive that had brought us here to the Austrian ski resort of Hochgurgl in a 2017 Mercedes-Benz GLS550 4Matic, a variant of the seven-passenger SUV that is replacing the brand’s GL model.

Powered by a 449 hp V-8, the GLS550 had effortlessly ferried my passenger, me, and our luggage the previous day from Innsbruck, the winter-sports center whose most visible landmark is the Bergisel Ski Jump that looms over the city. The route from Hochgurgl included an especially serpentine stretch that, we learned, served as the location for a chase scene in the most recent James Bond film, Spectre. Though the road was covered with a light dusting of snow, the GLS550 equipped with Mercedes-Benz’s 4Matic all-wheel drive had plenty of traction in Sport mode, one of five standard settings that also include Slippery and Comfort. (Our vehicle was also equipped with snow tires.)

Cornering was stable with the help of the optional Active Curve System, which reduces body roll. Still, the GLS550 is not a sports car, and we felt more cocooned than connected to the road, in part because of the standard air suspension, which helped us sail over ruts and icy bumps.

As with all the 2017 Mercedes-Benz SUV models, the GL in the GLS550’s moniker indicates that it is an SUV. The third letter in the brand’s new naming system refers to the vehicle’s car counterpart. The GLS series, then, is the S-Class of SUVs, endowed with the G-Wagen’s ruggedness as well as the flagship sedan’s elegance and luxury features—including seats equipped with a massage feature that can relieve the stress of winter driving in the Alps.

The GLS is available in four variants. In addition to the 550, Mercedes-Benz offers the diesel-powered 255 hp GLS350d, the 362 hp GLS450, and the top-of-the-line AMG GLS63, which is powered by a 5.5-liter biturbo V-8 tuned to produce 577 hp and 561 ft lbs of torque. All GLS models have a new 9-speed automatic transmission except for the AMG variant, which is equipped with the 7-speed gearbox from the GL. Each model has a tow rating of 7,500 pounds. Mercedes-Benz had yet to announce prices when Robb Report went to press, but the starting prices for the model-year 2016 GL series range from $65,500 to $122,000.

The sun was shining when our caravan of SUVs left Hochgurgl, but it was not warm enough to melt the ice on the roads leading to the Tim-melsjoch, an Alpine pass on the border with Italy. A short ride from the hotel, we stopped for breakfast at the recently opened Top Mountain Crosspoint. In addition to a restaurant with a panoramic view of the mountains, the facility houses a motorcycle museum displaying more than 170 classic bikes from nearly 70 manufacturers. (During the warm-weather months, the Timmelsjoch is a popular route with motorcyclists.)

From the Crosspoint, we ascended the icy slopes at a healthy clip, intentionally drifting out of the path of the vehicle ahead in search of fresh snow for extra traction. Over the radio, our guide encouraged the drivers to experiment with the GLS’s various drive modes. In Sport, the system sensed the road conditions and reined in the vehicle; but Slippery mode allowed for just the right amount of wheel spin as we glided around the turns.

After reaching the summit, we turned around and retraced our path, driving more slowly down the mountain. I could feel heavy intervention from the antilock brakes when our vehicle crossed black ice and entered hairpin turns. Mercedes-Benz offers an Off-Road Engineering package, which increases the ride height by as much as 12 inches and includes a low-range gearbox and locking center differential. Our GLS550 was not equipped with this option and still proved completely capable of handling the on-road snow and slush.

Compared to that of the GL, the GLS’s interior has cleaner lines across the instrument panel. The large color display that sits atop the central controls is easier to see than the recessed screen in the GL. The GLS’s seats are as substantial and supple as those in the S-Class. Ours were upholstered with optional Designo napa leather, which features diamond-pattern stitching. Mercedes-Benz offers five standard color combinations for the interior’s leather, including black and ginger beige. The leather is paired with rich, matte, open-pore wood trim.

The middle-row seating is spacious enough for most adults, but the third row will be quite a squeeze. With the third row folded down, the GLS offers nearly 50 cubic feet of cargo space. From the front seat, you have a commanding view of the road, and any sight-line hindrances are mitigated by the vehicle’s blind-spot-detection feature, part of a suite of standard safety features that are also standard equipment on the S-Class and other Mercedes-Benz models. The set also includes Collision Prevention Assist Plus, an automated collision-avoidance system, and Attention Assist, which will sound an alarm if the driver starts to doze.

There was no danger of nodding off on the return trip to Innsbruck, not when we were winding past spectac-ular scenery throughout the drive. We concluded with another look at the Bergisel. For nearly a century, the hill has hosted ski-jumping competitions, including the 1964 and 1976 Winter Olympic Games events. The top of the current structure, which was completed in 2002, is about 820 feet above Innsbruck.

When we arrived at the city, sunlight was reflecting off the tower’s windows, causing it to shine like a beacon. From the road below, we could see jumpers practicing. They sped down the Bergisel’s 320-foot track and flew into the air, exhibiting both grit and grace. By this point in the GLS drive, that had become a familiar combination of qualities.