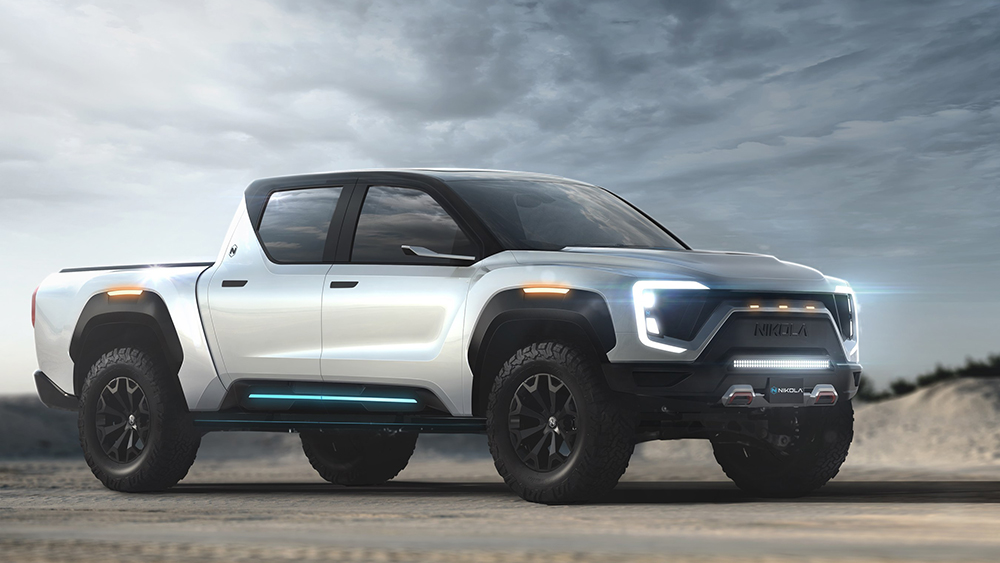 No, that’s not a typo. Nikola’s new electric pickup is touting an incredible 600 miles of range.

Announced on Monday, the truck, dubbed the Badger, has been engineered to outperform “every electric or petrol pickup in its class” and promises 100 more miles than the Cybertruck and 200 more than Rivan’s pickup. Those figures are all the more impressive when taking into account the vehicle’s 906 peak hp (455 continuous hp) and 980 ft lbs of torque.

The secret? Hydrogen. The Badger utilizes a fuel cell system that takes hydrogen from a refillable tank and converts it into enough electricity to power the motors for hours on end. According to the Arizona-based startup, the Badger will also be fitted with an onboard battery pack that will be big enough to power the pickup on its own and offer a more modest 300-mile range. Apparently, drivers will be able to switch between the modes with the touch of a button.

“I have been working on this pickup program for years and believe the market is now ready for something that can handle a full day’s worth of work without running out of energy,” Nikola’s CEO Trevor Milton said in a press release. “This electric truck can be used for work, weekend getaways, towing, off-roading or to hit the ski slopes without performance loss. No other electric pickup can operate in these temperatures and conditions.”

To that end, the Badger will also sport a 15-kilowatt power outlet—perfect for tools, lights and compressors—that can churn out enough power to assist a construction site for around 12 hours without a generator. Plus, it will have a hearty towing capacity of approximately 8,000 lbs.

Looks-wise, the vehicle doesn’t deviate much from the standard pickup script—and that’s the point. Sure, the Badger has a few Tron-style LED lights and some futuristic curves, but overall, it’s designed look and feel like the pickup truck you grew up with (albeit without the carbon dioxide-spewing combustion engine). With a generous five-seat cab and a 5-foot-long bed, the truck also boasts plenty of space.

To further refine the ride, Nikola is partnering with Dave Sparks (a.k.a. Heavy D of Diesel Brothers fame) to design, build and test the Badger in real-world environments.

“Being able to pull back the curtain of a production truck build is a rare opportunity where we can include the everyday truck owner to participate in the final outcome of design, exterior choices and performance specs,” Sparks said.

To help support the pickup, Nikola is also planning to build 700 new hydrogen filling stations in an effort to combat the overall shortage. Nikola says the locations of the first stations have been locked in, with more details to come.

The Nikola Badger will make its first appearance at the marque’s Nikola World 2020 event in Phoenix later this year. You can find more details and register for updates via the Nikola Corporation website.