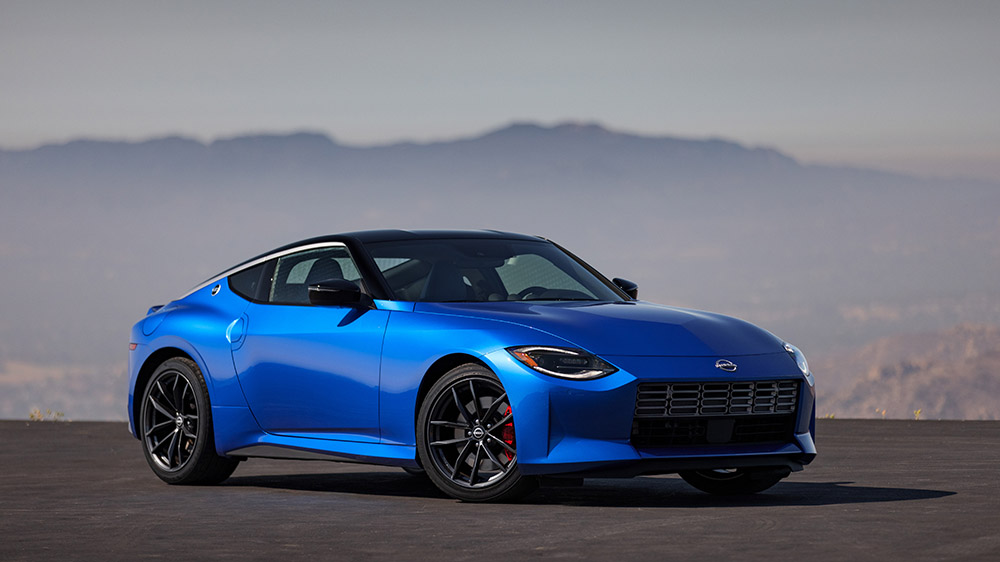 Simply dubbed the Z—not the 400Z, as many had expected—the Japanese automaker’s newest model is a decidedly modern coupé designed to celebrate its most famous nameplate. As we’ve known for months now, the car’s glorious retro-style body features several nods to the past. There’s an extended nose that recalls the original 240Z, while the rear end takes cues from the fourth-generation 300Z. These details shouldn’t all fit together, but they do and pretty seamlessly, resulting in a vehicle that looks even more athletic than its nearest competitor, the Toyota Supra.

Inside the coupé, Nissan has gone for a classic, streamlined look. The fully redesigned cockpit features a GTR-inspired sports steering wheel, a race car driver-designed instrument panel and the Z’s signature triple pod cluster of gauges tilted towards the driver. The center of the dash features a 9.0-inch infotainment screen from which you can navigate, check the weather and select entertainment options. There are also leather-appointed sports seats and an optional eight-speaker Bose audio system.

Inside the new Z  Nissan

Nissan knows that the Z can’t just get by on looks, though. And that why the company has equipped the vehicle with a powertrain sure to please even the most demanding enthusiast. Under its long hood, you’ll find a snappy 3.0-liter twin-turbo V-6, according to a press release. The mill is mated to a six-speed manual transmission standard—yes, standard!—that sends power to the rear axle and can generate up to 400 hp, 350 ft lbs of torque and has a redline of 6,800 rpm. A nine-speed automatic transmission option is also available, but we’re guessing most Z fans will opt for the stick shift. Nissan has yet to release performance numbers, but the automaker said it expects the sports car to be up to 15 percent faster than the outgoing sixth-generation 370Z.

The new Z is equipped with mechanical limited-slip differential that better distributes power to the rear wheels and launch control to help eliminate wheel spin and hop. They’ll help ensure you get off to a better and quick start off the line. Other features include a stiffer chassis, double-wishbone suspension and mono tube shocks, providing better connection to the road. There are also sports brakes, which feature 14-inch front rotors and four-piston calipers, so you’ll be able to stop on a dime.

The Z will be available in three trim levels: Sport, which is the base version, Performance and Proto Spec. Performance includes a retuned suspension, front and rear spoilers, more comfortable seats and forged 19-inch wheels with Bridgestone Potenza S007 tires. Proto Spec, which, as you may have guessed, is based on last year’s prototype, features yellow brake calipers, bronze rims and a number of special interior accents. It will be limited to just 240 examples.

The new Z doesn’t have a firm release date yet, but expect it to be available sometime next spring. As for pricing, Nissan hasn’t said anything other than to stress the car’s “accessible” nature. What that means remains to be seen, but Road & Track suggests it will start around $40,000. Whatever the final cost, lovers of ’80s and ’90s sports cars may have just found a modern model they can love.

Check out more photos of the new Z below: