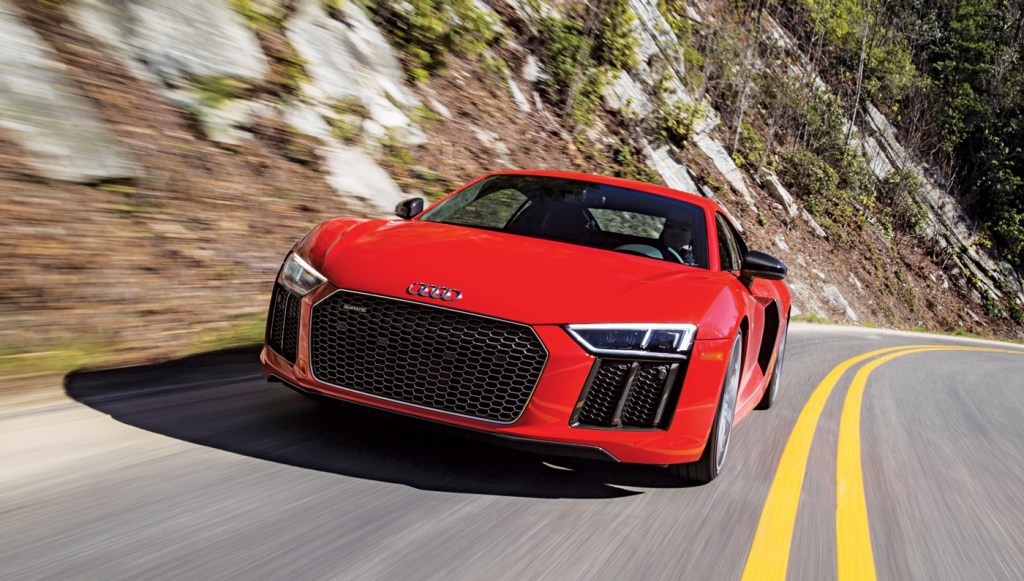 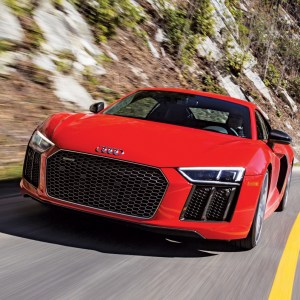 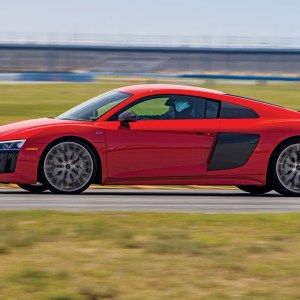 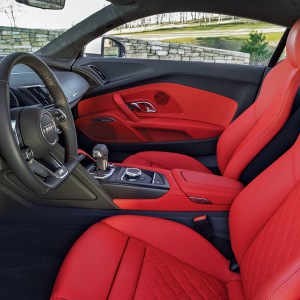 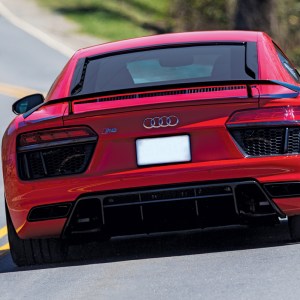 The second-generation Audi R8 V10 Plus strikes the right notes on the Blue Ridge Mountain roads and the Daytona racetrack.

“My heart! My heart!” Vince Neil shrieked as the new Audi R8 V10 Plus moved deeper into the North Carolina countryside, where the serpentine roads and switchback mountain passes of Pisgah National Forest awaited. The song, Mötley Crüe’s “Kickstart My Heart,” was one of several rock and metal classics that Audi’s PR team had loaded into the car’s Bang & Olufsen sound system. Selections from Ozzy Osbourne and Guns N’ Roses were also on the playlist, setting a raucous tone for the daylong 300-mile test-drive through the Blue Ridge Mountains of western North Carolina and southern Virginia.

No need to kick-start my heart, though, not when I was behind the wheel of Audi’s fastest and most powerful production model. When the road became curvy, the Quattro all-wheel drive kept the car glued to the asphalt through the turns, and the S-tronic transmission, which shifts gears in less than a 10th of a second in dynamic mode, enabled assertive downshifting into—and aggressive acceleration out of—the corners. The stiffened steel-spring suspension produced sharp, precise cornering, while the racing-shell seat kept me snug and surprisingly comfortable.

By using carbon fiber for the firewall and some of the external body elements, such as the splitter and rear wing, Audi has made the new V10 Plus as much as 15 percent lighter than the last version. It can sprint from zero to 60 mph in 3.2 seconds, according to Audi, and reach a top speed of 205 mph. In addition, the new car is more rigid than its predecessor, enhancing agility and responsiveness when it’s pushed to its limits.

Audi also made improvements to the cockpit, introducing digital instrument clusters to the dash and placing four control buttons on the steering wheel, including the one for selecting the car’s driving mode and the one for engaging the sport exhaust.

The exterior changes are subtle. “In the old car, there was a hint of an angle here,” said Alwyn Watkins, project manager for Audi’s modular sports-car system, pointing to where the front quarter panels connect to a wider, lower, and more angular grille. “Now it’s nice and sharp; it’s a crisper design.” The V10 Plus is visually distinguished from the base R8 primarily by the fixed rear wing. On the R8, the rear spoiler extends automatically when the car reaches 75 mph.

Watkins was speaking at the Biltmore Estate in Asheville, N.C., where the drive began. It ended at the Primland resort in Meadows of Dan, Va. The road trip was followed by a day of driving at the Daytona International Speedway (see “Closely Related to the Racecar,” page 72).  The idea was to show that the car is equally suited to backcountry roads and banked racetracks.

The early-morning sunlight painted strokes of orange and pink on the limestone facade of Biltmore House, the estate’s 175,000-square-foot mansion, which served as the family home for George and Edith Vanderbilt. It was built over a 6-year period from 1889 to 1895, and its architecture was inspired by the 16th-century châteaux of France’s Loire Valley. Now a tourist attraction, this Gilded Age relic, its surrounding gardens, and the rest of the 8,000-acre estate draw nearly 1.5 million visitors each year. Yet on this brisk spring morning, the center of attention was the group of three red and three white V10 Plus coupes parked in the estate’s courtyard. (The V10 Plus is available only as a coupe, and Audi offers a choice of 11 exterior colors.)

Following a brief overview of the car’s updated features, styling changes, and engineering enhancements, I jumped into the driver’s seat, adjusted the mirrors, activated dynamic sport mode, and turned up the audio system’s volume to hear the first selection on Audi’s playlist: the Rolling Stones’ “Start Me Up.”

Outside Asheville, Interstate 26 plunges into a valley and then climbs uphill. As I approached the valley, the minimal traffic and maximum visibility enticed me to stomp on the throttle. The car immediately sprinted forward with a growl from the V-10. A quick flip of the right paddle shifter freed the engine to produce even more acceleration.

“You have instant throttle response, instant power,” Anthony Garbis—Audi’s product manager for the A4, A5, Q5, and R8—had noted back at the Biltmore. “You don’t wait for any turbos to spool. It’s supersmooth and crazy fast.”

A glance down at the instrument panel indicated—to my surprise—that the car was traveling at a triple-digit speed. It felt more like a trot than a gallop. I eased off the gas and applied the brakes, which quickly and smoothly brought the car back to a legal speed.

In addition to more power, the engine of the V10 Plus delivers more sound than that of the standard R8 because of its sport-exhaust feature and dynamic sport mode, which is one of four engine and transmission settings. “The car just screams,” Garbis said. “It has such a growl. [In dynamic sport mode], when you get off the throttle and it starts crackling and gurgling at you and you hear it popping—it’s exactly what it should do. It sounds like a true racecar.

“It hits all the right notes in the sound department, and sound is such a big deal on a supercar,” he continued. “There are all these cool things that the car does that excite you when you’re driving. But if you want, you can put it back in normal and comfort modes and just cruise along quietly.”

No thanks. I wanted to hear the growl of a sports car that Audi says features 50 percent of the parts—including the same engine—of the R8 LMS racecar that won its class at this year’s Rolex 24 at Daytona. So the V10 Plus remained in dynamic sport mode, and the exhaust continued to pop and crackle all the way to Virginia. Besides, as the Audi-selected playlist suggested, this car, versatile as it may be, really isn’t built for cruising along quietly.