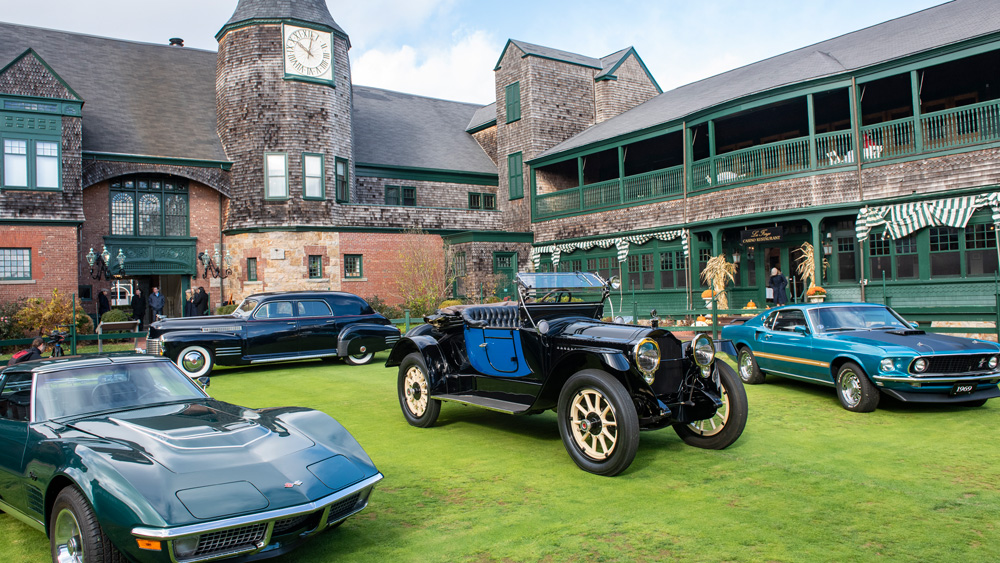 “The theme for the entire motor week is the history of automobiles and sport as it relates to Newport,” says Rick Schad, director of operations for the museum and director of the inaugural event. “Newport was the birthplace of sport in America—the U.S. Open, the America’s Cup, and motor racing.”

Noted collector Jay Leno will serve as event chair, and automotive historian Donald Osborne will serve as concours chair. The Concours d’Elegance will feature about 100 cars arrayed on the back lawn of The Breakers, the summer home of Willie K’s brother, Cornelius Vanderbilt II. All concours entrants will also join the Tour d’Elegance, a driving event that will begin on the Claiborne Pell Newport Bridge and end on Bellevue Avenue, home of the Audrain Automobile Museum and many of Newport’s finest mansions.

The Breakers, one of the Vanderbilt family’s mansions.  Photo: Courtesy of the Audrain Automobile Museum.

The festival will make the most of its elegant backdrop. John Legend will perform at the International Tennis Hall of Fame, which is a few doors down from the museum. Notable marques have planned curated displays at landmark properties around town. Bugatti, and the Bugatti Club, will appear at Belcourt of Newport; McLaren will be at Vernon Court, home of the National Museum of American Illustration; Porsche will take up residence at the Newport Art Museum; and Koenigsegg and Gunnar Racing will station themselves at Rough Point Mansion, which once belonged to Doris Duke.

While plans to stage an event where Vanderbilt held the earliest motor racing event in America did not come together, the festival will honor Willie K’s legacy in other ways. The concours trophy depicts him at the wheel of a Locomobile that he drove in the Vanderbilt Cup races that he staged later on Long Island. His Locomobile will participate in the festival, though it will not race. The Henry Ford Museum loaned it to the Audrain Automotive Museum, allowing attendees to see the inspirational car in person.