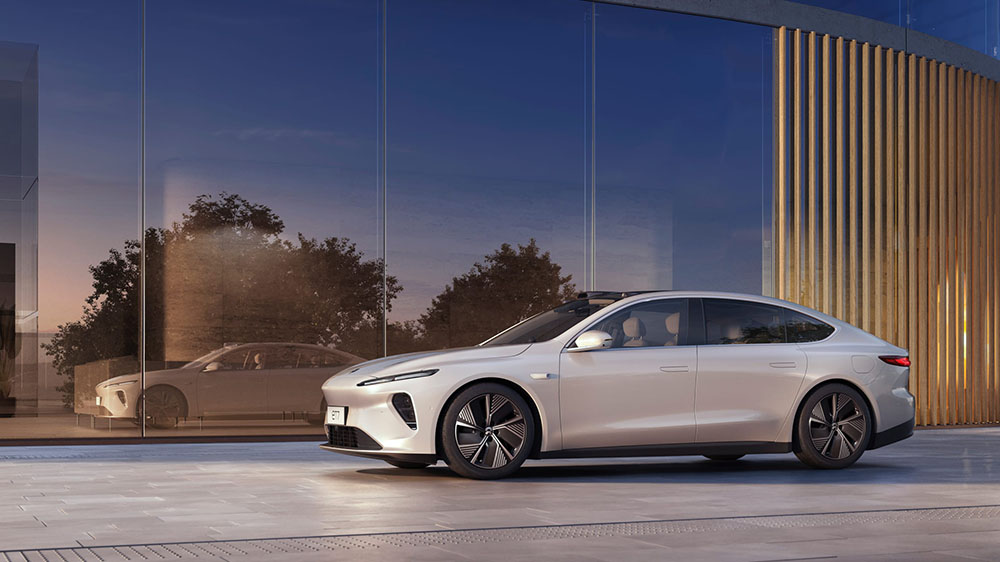 These days, an EV has to do an awful lot to stand out among the raft of battery-powered cars coming to market. A new model by Nio, however, could have what it takes to break through.

Unveiled over the weekend, the Chinese EV maker’s first sedan, the ET7, is taking direct aim at the Tesla Model S, promising a staggering 600-mile range and, as you might expect, self-driving capabilities.

Nio’s fourth production vehicle doesn’t look all that dissimilar from the EV it’s trying to unseat. Like the Model S, it has a smooth and flowing, if somewhat generic, shape. But it’s not just a carbon copy of Tesla’s four-door. The car shows off razor-thin, dual-beam LED lights in both the front and rear, while the front vents are much larger than those on its rival.

The chic, minimalist design carries over to the car’s interior. The spacious cabin is covered in sustainable materials and is decidedly more restrained than that of the Model S or the Porsche Taycan. The dashboard features a sizable digital gauge cluster behind the steering wheel and a 12.8-inch touchscreen infotainment system situated in the center console.

But the ET7’s inoffensive design is far from its main selling point. The battery’s is the thing with this model, and it will be available with three different choices: 70kWh, 100kWh and a solid-state option, according to Car and Driver. The standard 70kWh battery will offer a respectable 310 miles of range, while the mid-range 100kWh battery can reach 435 miles on a single charge, 33 miles more than the Model S Long Range Plus’s industry-leading 402-mile range. But, even more impressively, the solid-state battery, will offer a range of more than 620 miles on a single charge, according to the company. If true, that figure would dwarf the promised 517-mile range of the Lucid Air.

Inside the Nio ET7 sedan  Nio

Nio didn’t disclose charging times for the different battery configurations, but said the car will be compatible with its Battery as a Service subscription plan. This allows owners to swap out their battery for a fully topped-up unit at Chinese service stations, rather than waiting for the battery to recharge. Other performance details remain scarce, but the car will be powered by a dual-motor setup. These will combine to deliver 644 hp and 627 ft lbs of twist. Additionally, the car should offer plenty of pep, as Nio claims it will go from zero to 62 mph in 3.9 seconds.

Like its rival, Nio also promises that the EV will feature a self-driving mode. But that’s as much information as the company has offered. To help it operate autonomously, the vehicle will be outfitted its Aquila Super Sensing system, which includes “ultralong-range high-resolution” Lidar, 11 hi-res cameras, 12 ultra-sonic sensors and five wave radars, among other driver monitoring technology. To date, no automaker has been able to deliver true Level 5 autonomous capabilities, including Tesla. While it’s unlikely that Nio has made an industry changing breakthrough, we won’t know if the car offers next-gen-level autonomy or simply has a glorified driver-assist function until it hits the market.

The limits of autonomy aside, the only thing stopping us from being more excited about the ET7 is that Nio has yet to announce plans to release the EV in the US yet (right now it’s only planned for China and Europe). But the company has been talking about expanding Stateside for a couple years now. If the car does make it to our shores, it’s expected to start at about $58,000, with the fully loaded Premier Edition costing upwards of $81,000. Stay tuned.