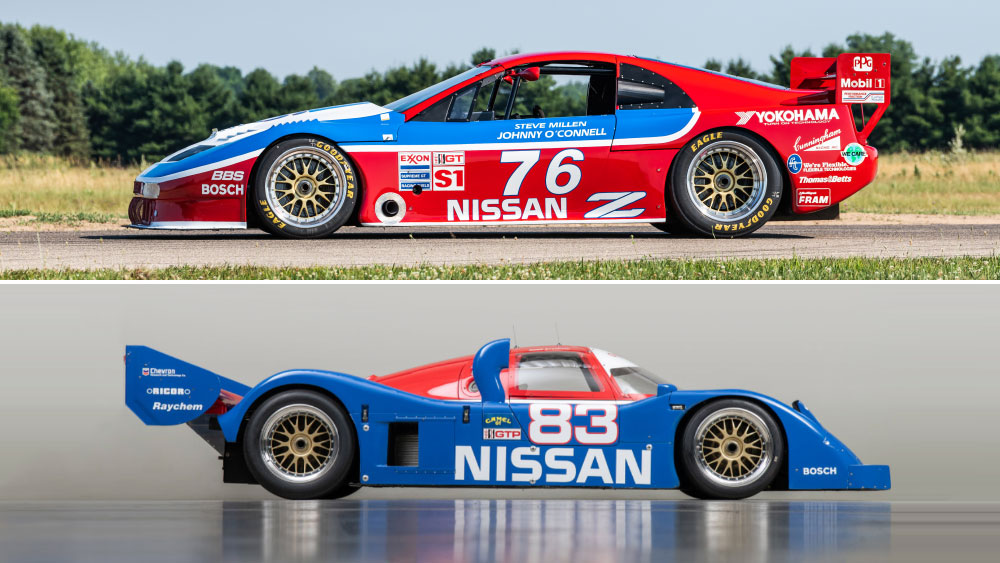 What a difference a day makes. That’s about the time left for collectors to bid on two Nissan race cars from the last decade of the 20th century—an era of notorious innovation in motorsport. The online platform Stratas Auctions is offering a 1990 NPT-90 and a 1989 300ZX Turbo IMSA GTO, cars that competed in different classes but both hail from the Japanese marque’s heyday in the International Motor Sports Association (IMSA) GT series.

From 1988 through 1991, Nissan driver Geoff Brabham dominated IMSA’s Grand Touring Prototype (GTP) division, with the NPT-90 playing an important role. By 1989, Nissan and Electramotive Engineering, working under the combined banner of Nissan Performance Technology Incorporated, relied on self-taught automotive savant Trevor Harris to help lead the chassis design and overall realization of the car. Carrying a 3.0-liter twin-turbo V-6, the first example constructed—chassis No. 90-01—is the vehicle on the virtual auction block.

“It was superior, from a mechanical point of view, to its predecessor from 1988, and it was also superior in aerodynamics,” Harris recently told Robb Report. “But the sensitivity of the car to ride heights and positioning of the bodywork relative to the track was way greater. It was more difficult to get the car set up, but when you got it right, it was really good.” In the NPT-90, Brabham took first in three races, leading Nissan to the overall championship for the 1990 season.

Sharing the digital stage with the NPT-90 is a slightly older sibling from a different category of the IMSA GT series. Campaigned by Clayton Cunningham Racing, the 1989 Nissan 300ZX on offer—chassis No. 002—was one of seven examples made for the team and competed in the GTO field, for cars with more than 2.5 liters of engine displacement. The car’s top finish in ’89 was third place in Ohio, piloted by John Morton. By the time its IMSA days were done, the 300ZX, also powered by a 3.0-liter twin-turbo V-6, had racked up four first-place finishes. Interestingly, during its racing life the car had its wheelbase lengthened, for better stability at full throttle.

“The car at auction is a modified 90-inch-wheelbase car,” Harris says. “The chassis tubes in that were parallel to the centerline, so you could cut the chassis and just put a straight piece of tubing in there. You had to do a few things to make the triangulation to the chassis proper, but it really didn’t take a lot to convert the 90-inch wheelbase to a 96-inch wheelbase.”

Drivers behind the wheel of this 300ZX earned four first-place finishes.  Photo: Courtesy of Stratas Auctions.

Ready to be raced again, the car has undergone more recent modifications that include a spare engine refurbished by Roush Performance. The enhancements have already paid off, with the 300ZX winning the Historic IMSA GTO Challenge race from last year’s Long Beach Grand Prix. Harris says the next owner will be “getting a lot of good history along with the car.”