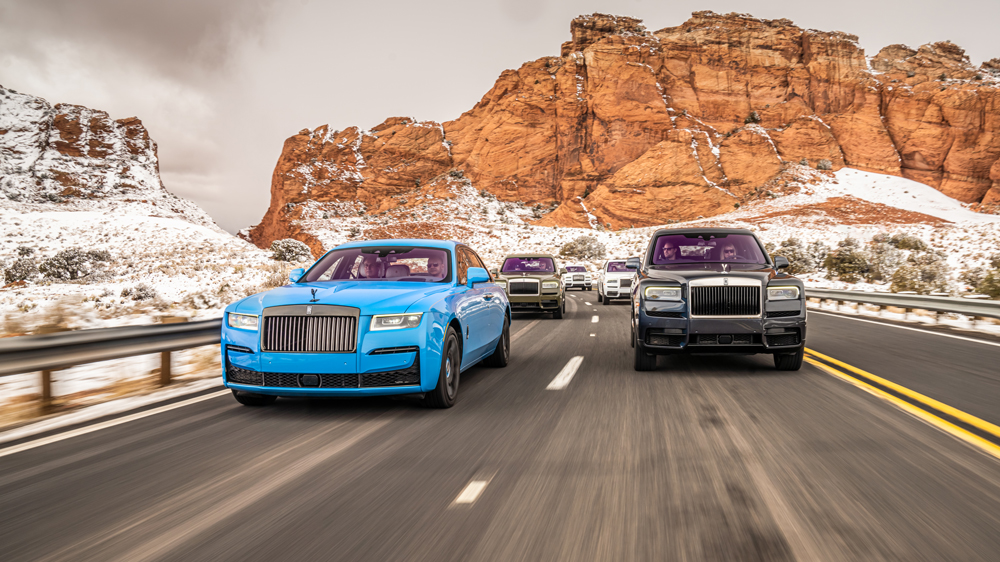 Comprehending the scale of the American West requires a complete recalibration of one’s perception of space and time. The iconic U-shaped Horseshoe Bend is a fragment of the mighty Colorado River that spans 1,450 miles end-to-end; Navajo Nation slot canyons are sculptural planes of golden sandstone draped like cathedrals; the ribbon of highway that bisects Monument Valley appears to ramble into forever.

Taking in this landscape across the bonnet of a Rolls-Royce Black Badge Ghost distorts the perspective through a modern lens, introducing a shock of brash paint hues and a whisper-quiet cabin that defies the distance-shrinking powers of a 662 hp V-12. A fleet of Rollers has been transported to these remote stretches by O’Gara Coach, a Southern California–based car-dealership network whose nameplates also include Bentley, Bugatti, Koenigsegg and McLaren. The four-day “Desert Escape” retreat was conceived as a way to introduce the brand’s posh offerings into these otherworldly surroundings, creating an improbable mashup between mechanical and natural.

“Other places can also sell you the suits and gowns,” company founder Tom O’Gara says, “but we provide the ball to wear them to.” In this case, the venue isn’t an oh-so-trendy metropolitan destination, but rather Amangiri, a rigorously minimalist high-end resort in Canyon Point, Utah. It’s the sort of hideaway that urbanites flock to for escape, where they can feel as distant from teeming masses as possible against the reward of nature’s serene and spacious grandeur. Amangiri occupies a unique niche, a modernist enclave enveloped by a sprawling natural environment nestled by an outdoor pool perpetually heated to 95 degrees. It also features a spa and world-class cuisine—all wrapped around a 175-million-year-old rock formation.

O’Gara is no stranger to curated customer events like Formula 1 races, track days at the Thermal Club in the California desert and attendance at the Indy 500. But in an effort to bolster a sense of community around events more inclusive than motorsports, the Rolls-Royce–themed escape was introduced into this expansive landscape. The experience was inspired by a vacation in Spain that Tom took with his son as well as Paris Mullins, O’Gara’s director of motorsports. During the trip, the trio availed themselves of exclusive outings, organized by White Label, that included driving a variety of McLarens. White Label is intimately entwined with the British marque: founder Ray Bellm rose to prominence when he convinced then-McLaren boss Ron Dennis to form three teams to compete with race-prepped McLaren F1s at the 24 Hours of Le Mans. The relationship led Bellm to compete in the grueling race 10 times, win his class three times and become a five-time world champion along the way. He subsequently went on to lead the 106 Driver’s Club, a group that organizes annual road rallies for McLaren F1 owners.

Applied to O’Gara’s paradigm of automotive getaways, Desert Escape presents a way for Rolls-Royce owners, historical enthusiasts and future prospects to experience the British marque in a travel package that includes optional private-jet transportation from San Diego, meals and spa treatments at the resort and daily driving loops through some of the region’s signature sights.

Upon arrival, the vibe is cinematic: framing Amangiri’s rectilinear architecture is the dwarfing vastness of the region. Earthen hues reflect millennia of wind, sun, erosion and time; in a way, the armada of Rolls-Royces against this background seems less ostentatious than it would in the city, presenting instead a classical status symbol devoid of status by virtue of being entirely free of context. Against these ancient rocks, Goodwood’s vehicular creations merely seem like futurist art—sleek and vault-like against these otherworldly backgrounds.

Our small group ventures into three days’ worth of driving activities, which use a cloverleaf approach of individual journeys that loop back to the Amangiri at the end of the day. Having organized driving events in the area previously, White Label’s team is well-versed in worthwhile attractions—Zion National Park, Horseshoe Bend, Monument Valley and the like, as well as the potential pitfalls—speed traps, inclement weather et al. The team also arranges onsite catering in which fresh, locally sourced meals are prepared in civilized, camp-like settings.

While topics like local history, conservation and ecology are discussed, the tie that binds it all together are the cars. Some have road-tripped in with their personal Rolls-Royces; most have trucked their cars in with the O’Gara group. I’m the beneficiary of a Ghost finished in Galileo Blue, a hue with an audacious streak of cerulean. Inside are more discrete colorways including a primary white, secondary yellow and tertiary grey treatment which reinforce the soothing aspects of the nearly three-ton sedan. Moving through space at a swift pace, the Ghost is eerily nonplussed, serving more as a high-speed sensory deprivation tank whose muted inputs are only counteracted by choices like music from the sound system or the wind noise of rolled-down windows.

Those who spend days with the group taking in this special corner of the United States are treated to a series of sensory contrasts: grand tours that cover long distances, light trail driving which feels well-suited to the off-road-capable Cullinan and a UTV excursion. Back at the luxurious basecamp of Amangiri, days of adventure are contrasted by spa treatments and dips in the pool. The experience provides a new context for these Rolls-Royces (or Bentleys, as executed in a separate trip), leveraging the vehicles as the starring role in a refreshingly different sort of sojourn.

As the Desert Escape offering pushed O’Gara’s scope beyond the motorsports realm, marketing and events director Bryttani Lanteigne reveals that the program is being further expanded. In 2023, an international event will enable a group of enthusiasts and a fleet of McLarens to journey to all three Aman resorts in Japan, offering yet another innovative way to discover singular people, cars and locales.