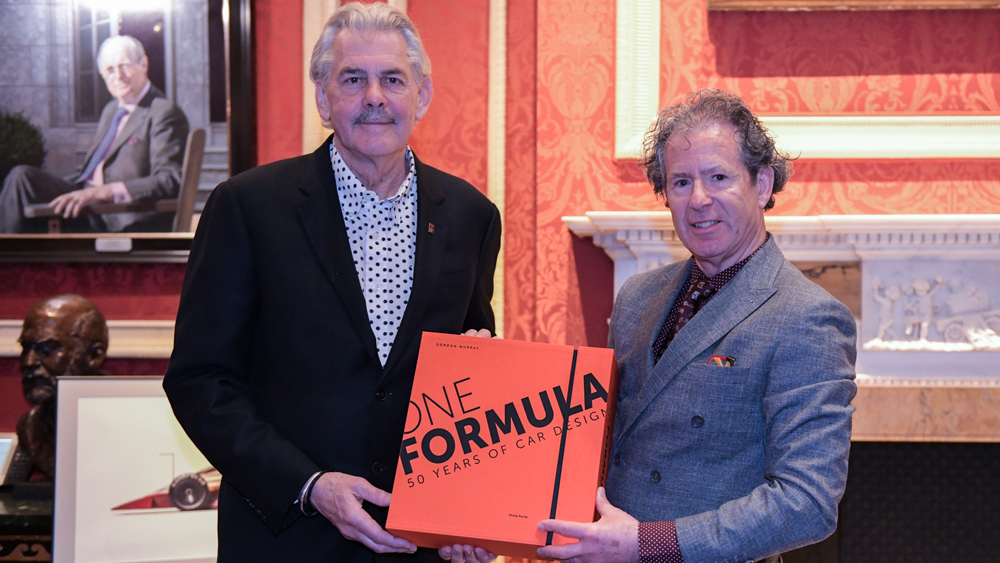 Phillip Porter received an embarrassment of riches after legendary automotive designer Gordon Murray took him up on his suggestion to write a book. When Porter, founder of Porter Press and author of 30 books on cars and automotive history, floated the idea in November 2017, he was unaware that Murray had retained seemingly everything from his five-decade career. “He kept every sketch, every drawing, every letter. It’s mind-boggling the amount he has,” Porter says.

Co-author Porter faced the admittedly pleasant problem of what to leave out while chronicling Murray’s life’s work, which covers more than 70 automotive designs for F1 cars, supercars, and city vehicles. What started as a 270-page book concept evolved into a two-volume, slip-cased behemoth that has 948 pages, 1,200 illustrations and weighs more than 26 pounds.

The Unique Edition of One Formula: 50 Years of Car Design.

One Formula: 50 Years of Car Design comes in three versions: the Classic Edition (£225, or $285), the Limited Edition (£750, or $949), and the Unique Edition (£2,500, or $3,165). This last consists of 25 numbered copies and features extras such as reproduction blueprints, a pair of signed photographic prints, and a 1:43 scale model of the T1, Murray’s first automotive design. As of mid-June, nine of the 25 unique edition copies had sold. Bonhams will offer a 26th during its Goodwood Festival of Speed sale—on July 5—to benefit Race Against Dementia, a charity created by Formula 1 luminary Jackie Stewart.

All three versions of One Formula unfurl the stories behind dozens of spectacular Murray creations, including the McLaren F1 (which Porter says makes for “almost a small book in itself”) and the Brabham BT46B, famous for its clever and then-F1-legal design that included a fan that helped the car stick to the road.

The book contains revelations and corrections to the record. In the McLaren F1 material, Murray discusses his willingness to strap himself into the car for a crash-test that involved launching the car at 30 mph into a concrete block—vivid proof of his confidence in his creation. Skittish insurers nixed the stunt. The ingenious Brabham BT46B fan car was not, in fact, banned from F1 after one race. According to Porter, Brabham team owner Bernie Ecclestone, who had ambitions to lead F1, asked Murray to retire the car.

Murray’s preference for pen and paper over computer-assisted design makes for a more soulful and tactile book. “You live the story with him. You feel more involved,” Porter says. “And I hope it’s utterly fascinating.”