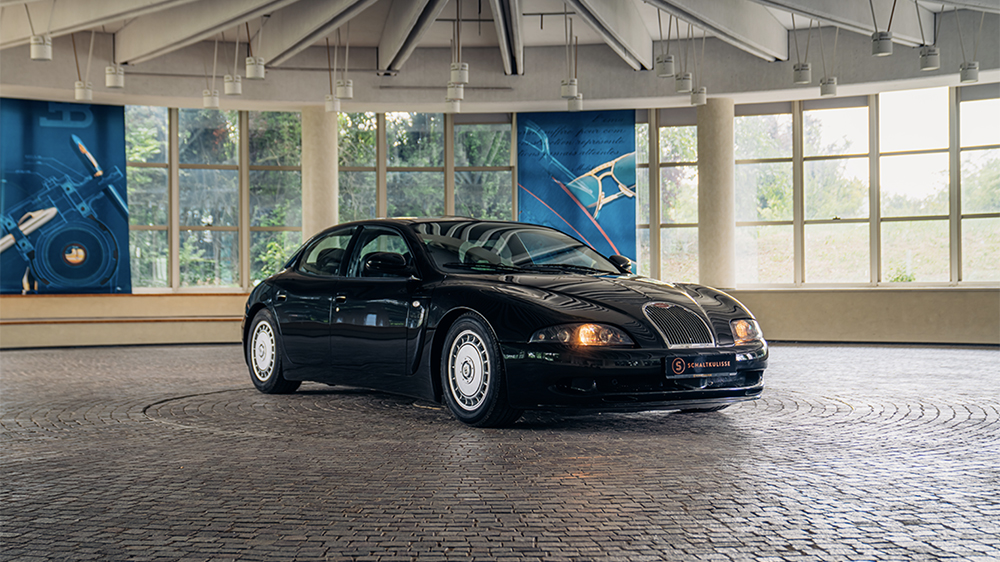 A forgotten relic from Bugatti’s long and winding past has returned to remind collectors that the marque wasn’t always about supercars.

An ultra-rare example of the automaker’s EB 112 sedan (yes, a sedan) from the mid-1990s was just listed for sale by exotic car dealer Schaltkulisse. It is one of only three prototypes ever built by the automaker, making it one of the most exclusive models in its history.

The EB 112 dates back to a very strange period in the marque’s history—after it was revived by Italian business man Roman Artioli in 1987 and before it was acquired by Volkswagen Auto Group (which recently merged it with Rimac) in 1998. With the EB 110 GT already in production, Artioli wanted to add a four-door model to the lineup. So, he commissioned Giorgetto Giugiaro to design a saloon heavily inspired by Bugatti’s rich heritage. The EB 112 would make its debut at the 1993 Geneva Motor Show but would never go into production, with only a trio of prototypes ever seeing the light of day.

This particular example, chassis no. 39002, is the second of those prototypes, and seems to represent a stylistic halfway point between the EB 110 GT and Volkswagen AG’s first Bugatti, the Veyron (which was also designed by Giugiaro). It features a curvaceous shape reminiscent of the Type 57 SC Atlantic with a sporty fastback profile. Up front, you’ll find an earlier iteration of the company’s iconic horseshoe grille.

The interior of the EB 112 looks similar to the one that would eventually feature in the Veyron. A metal plate covers the cockpit’s gauge cluster, as well as the center console, which features climate control and audio systems (the latter has a period-appropriate CD player). The biggest difference, by far, is the rear of the cabin. There you’ll find two large seats with a center divider between. Because the divider pulls up, you can likely fit three in the back comfortably when it’s down. As in the front, the seats are covered in sumptuous black leather.

Inside the EB 112 prototype  Schaltkulisse

If EB 112 looks unique from the outside, a more familiar sight lurks under the hood—a Volkswagen-sourced 6.0-liter V-12. Mated to a five-speed manual transmission which sends power to all four wheels, the mill can produce up to 450 hp, 479 ft lbs of torque and can push the saloon from zero to 60 mph in 4.3 seconds. Not bad for a car that has room for the whole family. This particular example, which was ordered in 1993 but not delivered until 2000, has just 2,423 miles on the odometer and has only been owned by one person, which is why it looks to be in such good shape.

So how much will such a rare Bugatti set you back? Schaltkulisse has conveniently left that info off the sales listing for the car, but you can reach out to the dealer for a quote. Considering the four-door’s rarity and the fact that it would’ve carried a seven-figure sticker price had it gone into production, we’d be willing to guess the German dealership is asking a whole lot.

Check out more photos of the EB 112 prototype below: