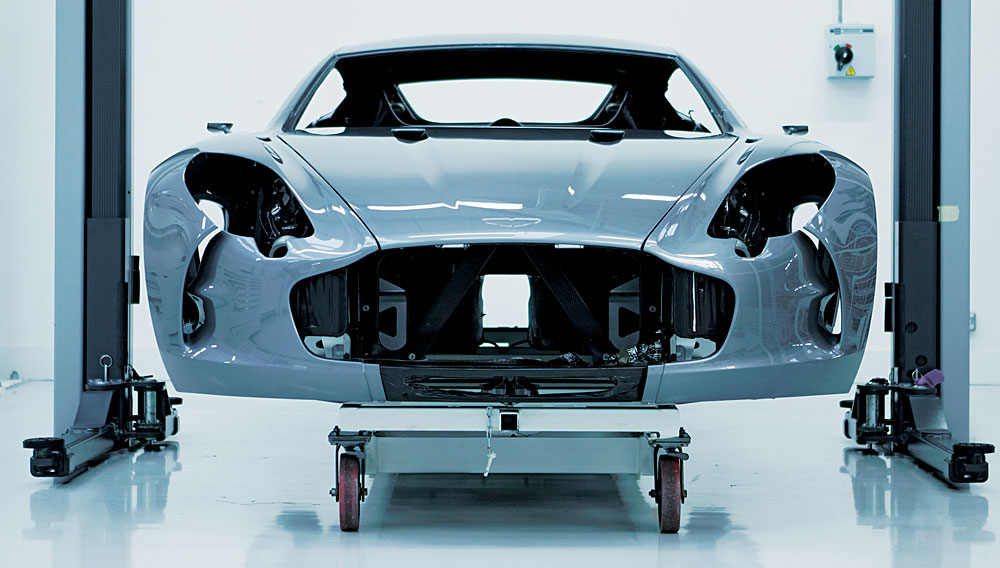 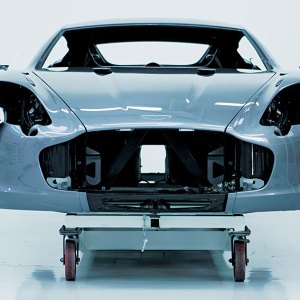 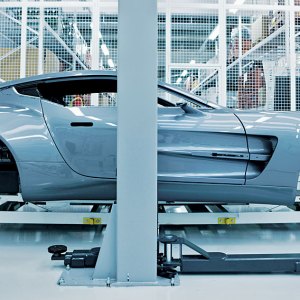 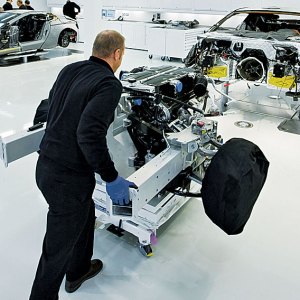 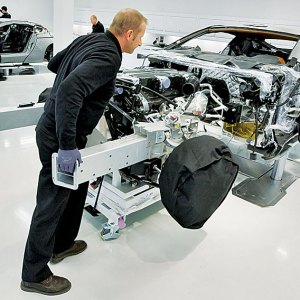 A Bang & Olufsen sound system fills the room with an instrumental composed specifically for the occasion. The cluster of 500 organic LED lights hanging from the ceiling shimmers in concert with the music, illuminating the space, and from the darkness appears a new One-77, Aston Martin’s extremely low-volume, low-slung modern muscle car.

These theatrics come standard for any owner who takes delivery of the nearly $1.8 million One-77 in the VIP customer lounge at the Aston Martin factory in the English village of Gaydon. The presentation ceremony underscores what each of the 60 buyers (as of mid-December) already knows: that the One-77 promises to be a special car, and meeting it for the first time should be a memorable event.

Serial production and interchangeable parts have rendered handmade cars nearly extinct. But even by the standards of Aston Martin, which is one of the few manufacturers that continue to build cars by hand, the process of producing a One-77 is an anachronism—though one involving the most advanced technologies and components.

So different are the building procedures for the One-77 that Aston Martin has established an assembly facility separate from its main factory. Instead of the factory’s assembly-line arrangement in which a car moves from one station to the next, each One-77 remains stationary while the craftsmen and parts come to it.

The build area is stark, with a white-on-white color scheme and an absence of any features that might distract workers as they cut and sew leather for the car’s interior appointments or assemble its intricately detailed wiring components. In one area of the facility, engines rest on rolling platforms, waiting to be moved into place. Nearby are hand-formed aluminum bodies—some still matte black from the e-coating process—that workers will eventually pair with mechanical underpinnings.

Aston Martin builds four One-77s at a time, taking about six weeks to complete them. Two or three workers concurrently labor at each car. Often, half their bodies are hanging out of the car’s shell, which is protected by a tailored vinyl cover, as they route bundles of wiring, solder electrical connections, bolt in various components, or mate the power train to the chassis.

Each One-77 is commissioned by the car’s buyer, who is invited to visit the Aston Martin headquarters in Gaydon and consult with Marek Reichman, the company’s director of design. Reichman can help buyers choose their car’s colors, textures, and finishes, a potentially daunting task because of the number of options. For example, although Aston Martin offers 14 exterior colors unique to the One-77—including whites, bronzes, grays, and different shades of silver metallic—buyers also can have the paint color-matched to a watchband or even nail polish. Headliner choices range from Alcantara to leather bearing various laser-etched patterns. Instead of the more conventional brushed or polished aluminum for the interior trim, buyers can select a precious metal such as ruthenium or rose gold (one of the few options that will increase the car’s base price).

The choices continue after the car is delivered. Aston Martin says that the factory calibrates the One-77’s suspension for 90 percent of driving styles and roads. Nevertheless, the company will send a technician to wherever the car is garaged and tune the suspension according to the owner’s preference, whether it is for a favorite stretch of asphalt or a racetrack.

Anticipation of deliveries has been building for some time. (As of mid-December, deliveries were expected to begin before the year’s end.) The One-77 debuted in fall 2008 at the Paris Motor Show, but it was not completely unveiled; it remained mostly concealed under what Aston Martin referred to as a “Savile Row–tailored” car cover. Its first full presentation took place in March 2009 at the Geneva International Motor Show. That was about a year and a half after Aston Martin CEO Dr. Ulrich Bez approved plans to develop an all-new model that would have a production run limited to 77.

Why 77? In an airy space adjacent to the design studio, design director Reichman, tall and smartly dressed, ruminates that 50 cars seemed too skimpy, 100 was not special enough, and 75 would be “too obvious.” He adds with a chuckle, “We never do anything too obvious at Aston Martin.”

The number seven is rife with connotations for Aston Martin. It could allude to the year of the project’s inception (2007), to Dr. Bez’s birthday (November 7), or, of course, to Aston Martin’s long association with a certain British secret agent. Regardless of the car’s production volume and why Aston Martin chose that sum, the nearly century-old company conceived the One-77 to represent a pivotal period in its history. “We had amassed all this intellect and understanding,” Reichman explains, “and really wanted to show our capabilities to the world.”

As the design team worked on sketches, the project was christened the One-77, suggesting that each vehicle would be an essential component of a 77-piece art object. The designers continued to refine the sketches until the aesthetics conformed to the realities of engineering. Aston Martin had established lofty performance goals: a top speed faster than 200 mph, a zero-to-60-mph time less than four seconds, and horsepower in excess of 700. The car’s high-speed capabilities required the addition of a retractable spoiler—an unprecedented feature on an Aston Martin—but the essential layout did not stray from the brand’s characteristic front-engine, rear-drive setup.

At the core of the One-77 is a carbon-fiber monocoque that is worth roughly one-half the value of the vehicle because of its labor-intensive and time-consuming construction. A Canadian supplier employs a team of six technicians who spend three weeks cutting, laying, curing, autoclaving, and finally lacquering each chassis before shipping it to the United Kingdom. A firm in Coventry, England, spends two weeks hand-forming and e-coating each car’s aluminum body panels before delivering the body to the One-77 assembly facility, where it then receives a nine-layer paint treatment.

To build an engine capable of meeting and ultimately exceeding its output goals, Aston Martin called on longtime collaborator Cosworth, an engineering firm based in Northampton, England, that has been involved in motorsports for more than 50 years. The One-77 engine build begins with a 12-cylinder block from Aston Martin’s DBS model. The crew at Cosworth bores the cylinder walls from 6 liters to 7.3 liters and then plasma-coats them for greater heat dissipation, lower friction, and longer wear. They upgrade the cylinder heads, cranks, rods, pistons, valves, cams, and flywheel, and convert the lubrication system to a dry-sump arrangement, which enables a lower center of gravity.

Aston Martin has equipped previous models with superchargers to boost power, but it chose to leave the One-77 naturally aspirated because the mammoth powerplant already faced the formidable task of maintaining reasonable operating temperatures. To mitigate the heat, Aston Martin added carbon-fiber, ceramic-lined chimney vents above the engine, which still runs hot enough to require a gold-foil heat shield between it and the passenger compartment. In final form, the One-77 produces 750 hp, the most of any naturally aspirated production road car.

In addition to the One-77’s extraordinary performance capabilities, Aston Martin also focused on refining the car’s exhaust note. Stressing the importance of pure orders of tone rather than half orders—the equivalent on a piano of white keys as opposed to black keys—Aston Martin aimed for more of a European-style engine note instead of the crude rumble of a hot-rodded V-8. Equipped with an exhaust valve that activates at approximately 3,500 rpm, the engine produces an irregular, guttural pulse when it idles. But as the car accelerates, the sound becomes a bellowing roar that evokes a late-1990s Formula 1 car.

The One-77’s automatic speed-shift transmission begins as a manual gearbox from a DB9, because that vehicle’s gear ratios are best matched to the supercar’s power, weight, and projected top speed. Power is routed through a prop shaft within a modified torque tube that features magnesium as opposed to aluminum, which is a heavier metal. Hydraulic gearshift actuation and unique gears, finishes, bearings, shift mechanisms, and even lubricants also distinguish the One-77’s transmission from the DB9’s. Enthusiasts might wonder why the One-77 does not employ a dual-clutch, the gearbox du jour for performance cars. Although that type of transmission enables preselection of gears for quick upshifts and downshifts, it is also heavier than the One-77’s gearbox. Additionally, by enhancing transmission technology with which it is already familiar, Aston Martin reduced the risk of delaying completion of the One-77. And besides, Dr. Bez believes twin-clutch transmissions are faddish.

Despite the performance goals that Aston Martin established for the One-77, says chief engineer Chris Porritt, the company was not seeking to create a competitor for the Volkswagen Group’s notorious exercise in four-wheeled excess. “There was never a desire to out-Bugatti Bugatti,” the lanky, bespectacled Brit asserts from a Le Corbusier sofa in the VIP lounge where owners will receive their cars. Yet Porritt also acknowledges that, throughout its development, the One-77 was measured against the Veyron, as well as flagships from Porsche, Pagani, Koenigsegg, and McLaren. But if you are wondering how the Aston Martin would fare in a comparison test against other exotics, you might be missing the point, says Porritt. “It isn’t the quickest to X miles per hour. It isn’t the fastest. It isn’t the most aerodynamic,” he says. “It is a combination of stunning attributes that have come together, while presenting what we believe is the most beautiful car you can buy.”

With a laugh, Porritt adds, “Dr. Bez says [the One-77’s] performance is ‘adequate,’ which is probably a massive understatement.” Porritt would know, having accumulated thousands of miles behind the wheel of the One-77 during its development. None of the One-77 owners sampled the car before buying one, and as of mid-December, no members of the media had test-driven the vehicle. But Porritt subjected prototypes to high-temperature chamber tests, laps at the Nürburgring Nordschleife circuit, and 220 mph speed runs. He also has taken a One-77 on tamer drives. “Around town it’s a very docile, easy-to-drive car,” Porritt says. “You can get really good performance from 50 percent throttle. But when you crack it wide open on the road, it has a huge change of character and feels like a proper supercar.” And when you plant the pedal, says Porritt, “it just keeps going, and then just keeps going, and then just keeps going. You can easily get up to 200 miles per hour. The first time I drove the car, I was giggling like a child.”