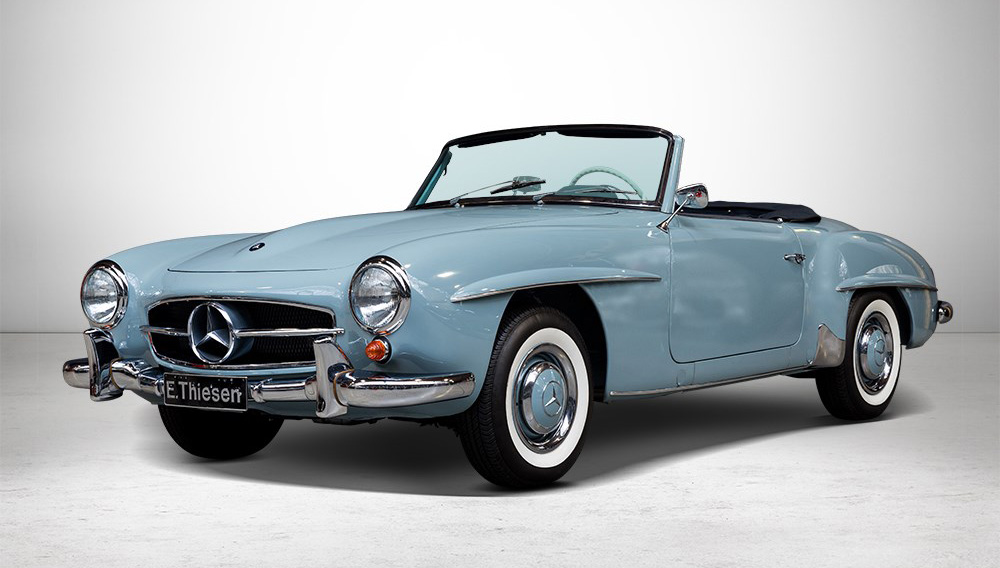 On Tuesday, December 8, 2015 at 6 pm CET, the leading online auction house, Auctionata (www.auctionata.com), will put a total of 28 outstanding automobiles from the world’s oldest automaker under the hammer, in the very first “Mercedes-Benz Only” auction. The list of the offered vehicles draws a fascinating line from the early days of automotive culture to its most recent history. The diversity of car genres range from luxury convertibles and high-performance sports cars, to representative limousines, legendary racecars and exceptionally precious classic utility vehicles. As usual, the auction will be accessible for bidders worldwide, and can be followed live via computer, tablet or the “Auctionata Live” iPhone App.

Highlights of the auction include a 1971 Mercedes-Benz 280SE 3.5 Cabriolet in extensive restored condition, which will enter the auction with a starting price of €410,000. An exceptionally rare vehicle of the auction is the Mercedes 300 SC Coupe with a steel sliding roof from 1956, of which only 98 models were manufactured, and only 12 with a steel sliding roof. The car was fully restored to concourse-condition by a renowned Mercedes specialist in Germany between 1993 and 2000. The starting price of this rare vehicle is €570,000. Undoubtedly, another desirable rarity is a 2007 Mercedes-Benz SLR McLaren 722 Coupe – a super sports car, developed by Mercedes-Benz and McLaren between 2003 and 2009, and produced in England. From mid-2006 onwards, the custom model 722 was available, and limited to 150 vehicles each of the Coupe and Roadster. The edition 722 honors the legendary victory of Sir Stirling Moss and co-driver Dennis Jenkinson of the Mile Miglia in Italy in 1955. He drove the 1,000 miles in a record time of 10:07:48 in a Mercedes-Benz 300SLR. The 722 was his starting number and time. The vehicle is in mint condition and will enter the auction with a starting price of €580,000. Another outstanding model in this auction is the Mercedes-Benz CLK DTM AMG from 2004, and a custom model of the CLK class built for the DTM-season in 2003, in which Mercedes-Benz won 9 out of 10 races. It was produced in a low volume production of 100 vehicles and hand crafted at AMG in Affalterbach. In near mint original condition and with only 16,278 km on the speedometer, this vehicle will go under the hammer with a starting price of €320,000.

Benz 300SEL 6.3 and a 1956 Mercedes-Benz 300SC Coupe will be available for sale. The offer will be further supplemented by younger coupes and convertibles.

The auction will be co-hosted by classic cars expert Johannes Hübner, who will share his expertise throughout the auction. Moreover, the cars will be presented by the former German Formula 1 racing driver Jochen Mass, member of the McLaren Racing Team between 1974 and 1977. As a brand ambassador for Mercedes-Benz, Mass is a regular attendant of many motor sporting events, and also takes part in numerous classics rallies, such as the legendary Mille Miglia and the Goodwood-Festival.

Auctionata brings the world of unique works of art, antiques and luxury collectibles to the internet via its frequent livestream auction broadcasts from locations in Berlin and New York. Users from all over the world bid in Auctionata’s livestream auctions at any time, from any device and from wherever they are located. Auctionata also offers the typical services of a traditional auction house online via its website: Valuation, authentication, curation, auction and all related services including a full authenticity guarantee. Potential sellers benefit from the free and non-binding online valuation, which gives a first quick perspective on potential auction results. Auctionata professionals and its global network of over 300 experts from more than 40 countries ensure a proper assessment and authentication of each object that goes to auction. The spectrum ranges from paintings, prints, sculptures and antiques to furniture, design objects and porcelain, to watches, jewelry, wine and even classic cars. The company was launched by Alexander Zacke (CEO) and Georg Untersalmberger (CTO) in 2012 in a hotel room in Berlin. Today Auctionata is the biggest auction house in Germany and operates globally with offices in New York, London, Zurich, Rome and Madrid. The company recorded total net sales of €31.5 million in 2014, and €35.7 million in the first half of 2015. The investors include Earlybird, HV Holtzbrick Ventures, Hearst Ventures and Groupe Arnault, controlling shareholder of French luxury group LVMH Moët Hennessy Louis Vuitton.