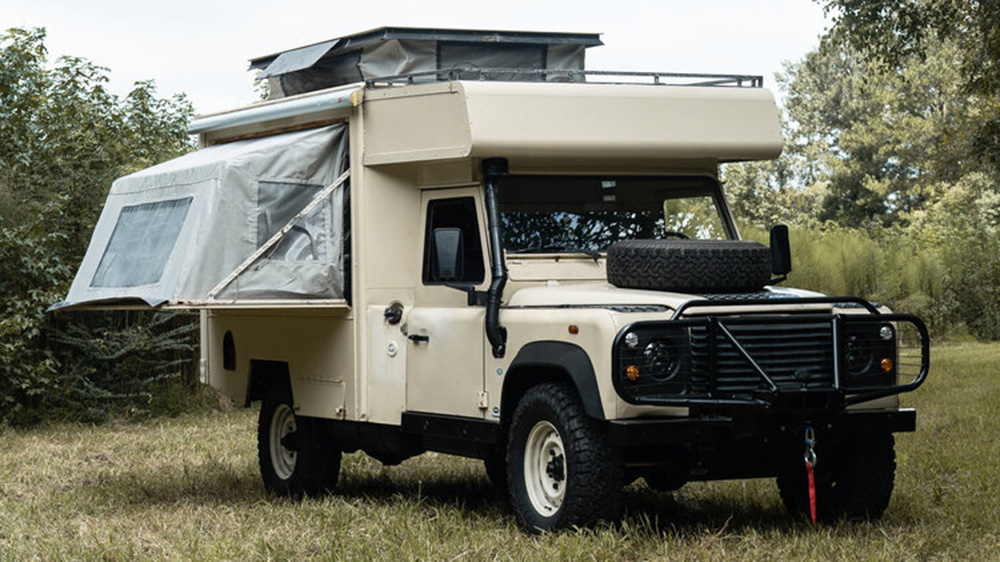 Camper design tends to focus on function over style. But that doesn’t mean there aren’t some cool-looking campers out there. Just look at Osprey Custom Cars’s new Land Rover Defender-based model.

The North Carolina shop, which specializes in Land Rover restorations, has just unveiled its latest project: an overland camper conversion based on the extra-long 1990 Defender 130. Osprey has tweaked the classic expedition truck in all the right ways, resulting in an off-road friendly camper guaranteed to make enthusiasts swoon.

The first thing you’ll notice about the shop’s conversion is its camper shell, which makes the already hulking vehicle even taller and wider. Shells are usually something of an eyesore, but on a boxy beast like the Defender 130 it really works. The entire entire vehicle is finished in a safari-appropriate tan hue, which is offset by matte black after-market accessories like a new bumper, a brushguard that shields the new LED headlights and a 12,000 pound winch with a synthetic rope line. And, just as you’d expect, it rides on a set of chunky BFG all-terrain tires.

Inside the camper shell, Osprey designed an open layout that favors storage over all else. The spacious interior is devoid of the creature comforts you’ll find on most of today’s luxury campers, but there’s plenty of room to sit and a kitchenette that features a refrigerator and stove. It’s nothing fancy, but it’s more than enough for a roughing it-style camping trip. If you’re wondering where you’ll sleep, there’s a well-ventilated, pop-out tent stored by a panel on the passenger side of the camper, which can fit a full-size mattress. There’s also room for a propane tank that provides gas for the hot water heater and stove. If this all sounds a bit spartan, don’t worry, there’s also a new stereo and AC system.

There are plenty of modifications on the mechanical side of the vehicle as well. The first thing the shop did upon acquiring the base vehicle earlier this year was convert it from right hand to left hand drive. It’s also been outfitted with a powerful new 300Tdi 2.5L four-cylinder diesel engine mated to a late-model R380 5 speed manual transmission. Other upgrades include a new transfer case, drive shafts, radiator and shocks and springs.

If you’re looking to turn heads on the highway or at the campground, you’re not going to do much better than the Defender 130 Overland Camper. The stylish off-roader is priced at $99,950, which actually puts it on the low end of the shop’s offerings.